The candidate of United Progressive Party (UPP) for Anambra State House of Assembly, Aguata 1 Constituency, in the 2019 general elections, Hon. Onyekachi George Ezulike, has defected to the People’s Democratic Party (PDP) along with his supporters.

Speaking during the event in his home town, Achina, Aguata LGA; Chelsma, as he is fondly called, said his defection was in line with his vision and mission in public service.

His words, ‘My message during our campaign was a deliberate tough-love kind of message, delivered in a stern and unsentimental manner; telling our people the truth, reminding them of their complicity and their contribution to the problems they always complained about, to get them angry and wake them up from slumber, one person at a time.’

Hon Ezulike said he started his political structure from his former party, UPP, to reach his destination, PDP. 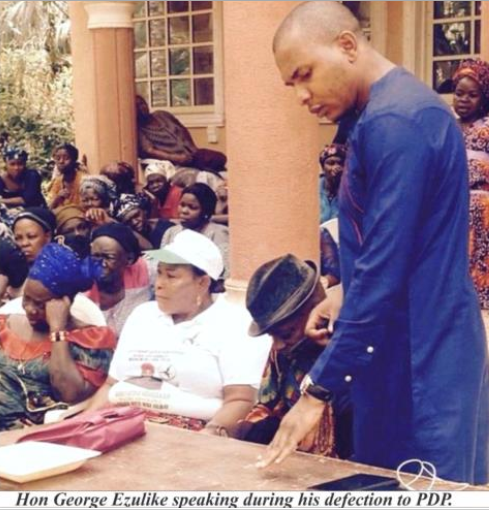 ‘United Progressive Party was that platform for me then; Chief Chekwas Okorie, the national chairman, understood my mission and welcomed and encouraged me. The Anambra State chairman of the party then, Dr. Sylvester Igwilo, saw my vision and taught me my first lessons in Nigerian politics in the most un-Nigerian way. My introduction was done successfully; letting our people know what I stood for, where we needed to be and how to get there.

‘I talked about debates, implicit and explicit social contract, building trust and sense of belonging, monthly town hall meetings, leveraging technology to drive accountability and efficiency, data-driven constituency, projects, etc. I couldn’t have achieved that on any other platform without the corrupt structure doing their best to gag me.’

Ezulike said the personal dispositions of his mentors in his constituency encouraged him to defect to PDP, and noted that it was now imperative to build a critical mass around that vision. He said the PDP presented a well situated platform without extremities that he could not be associated with.

‘I had long discussions with Mr Godwin Ezeemo who encouraged me to join the PDP to propel my vision, and Ernest Okechukwu Ezenwa, who, though I contested against him, believed in my capacity and was convinced that young people like me represent hope for the future and are needed now.

‘These are people I respect, who also know what I stand for and are convinced that PDP will only amplify my vision for the greater good,’ he said, noting that Mr. Val Ozigbo, the PDP candidate, made him a believer in his vision without any inducement. He said it was individuals; not parties, that created institutions or changed systems.

He further described the emergence of Ozigbo from PDP as a candle in the dark and expressed the hope that more of his calibre would come out from their comfort zones and join public leadership in order to for the state to witness the level of efficiency that ‘some may mistake for miracles’.

He said it was the reason he was getting involved with his siblings and supporters to propel the capacity of Val and his vision of change agents to take PDP to victory.

Also speaking at the event, Hon. Pascal Okechukwu Okpala, the Financial Secretary, PDP, Anambra Chapter, assured him and his supporters of a large space under the party’s umbrella.

Welcoming him to the PDP fold, a visibly elated Hon. Sunny Umenne, Chairman Peoples Democratic Party, Aguata Local Government Area, congratulated him and his supporters for taking a wise decision to be part of the large Umbrella the People’s Democratic Party.

Hon Ernest Okechukwu Ezenwa, PDP candidate for Anambra State House of Assembly, Aguata 1 Constituency in the 2019 general elections, extolled the qualities of Hon Ezulike, expressing optimism that he was one of the beacons of hope, politically, in the area.

He described him as a human asset and an enterprising and exemplary youth who joined politics as a change agent and whose membership of PDP would ensure a bright future for the party, as well as its success in the coming election.

In attendance were his supporters from UPP, political associates, and notable politicians from Aguata and beyond.

Hon Ezulike is a young entrepreneur with an impressive corporate background.