The final of the YSFON U-17 Cup took place at the Awka City stadium, with Ozala FA club Obosi and Homeland FA Club of Nnewi slugging it out. It started at 2pm last Sunday, and ended at about 3:50pm.

The Homeland FA Club defeated their opponent with 2 goals to 1 to emerge as the winners of the Cup after both teams tried their best to win. They were equally matched and displayed excellent skills and performance. 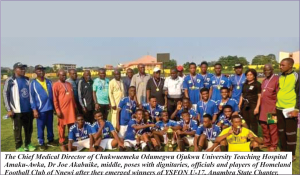 At the end of the match, the CMD, Hon. Dr Joe Akabuike, was called to decorate both teams, as well present the trophy to the winners of the match.

Dr Akabuike in his speech encouraged both clubs to strive for a better tomorrow, nothing that it was a kind of talent hunt, which he said, would eventually elevate them to the international level, thereby earning them big money.

He also advised all, both old and young, to always engage in physical exercise, no matter how mild it was, so long as there was no underlined sickness; even as he warned them to be careful not to exceed one’s capacity.

Hon. Dr Akabuike charged all, both old and young, to engage in physical exercise.

The Chief Medical Director of Chukwuemeka Odumegwu Ojukwu University Teaching Hospital Amaku-Awka was one of the special guests at the final of the Second Edition of Igwe Nanka Youth Sports Federation of Nigeria, Anambra State Chapter.