Holy Ghost Academy, Amaokala, has unveiled the hall of fame for the graduating students who exceptionally distinguished themselves in the 2021/2022 academic session.

The hall of fame was unveiled last Sunday, October 2, at the school pavilion, during the send-off ceremony of SS3 Students which featured presentation of awards to students who excelled in different categories, as well as others whose contributions had impacted the college significantly.

Unveiling the hall of fame, an Amaokpala indigene, Sir Patrick Ikwueto, SAN, said that the idea behind the educational trust fund which had been created in the college was to encourage students to thrive and become better version of themselves. 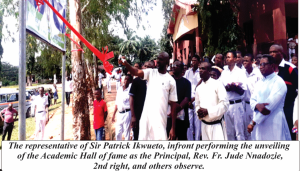 Delivering a paper on ”The Prospect of Education and the need to vote wisely in 2023 General Elections, Mr. Valentine Obienyem, the media adviser to the Labour Party’s presidential candidate, Mr. Peter Obi, said his presentation could be called commencement speech, as it created a vivid picture of likely things which the graduating students would meet outside the four walls of the college.

He charged them not relent in pursuing their life dreams and aspirations, saying that the foundation which the college had laid in them during their formative years should be continued. He noted that the students, having been trained, were expected to put the training which they received into action.

Speaking to Fides, the Principal, Holy Ghost Academy, Amaokpala, Rev. Fr. Jude Nnadozie, said the customary celebration in the school was geared at sending off the 2021/2022 Set of Students and avail the management the opportunity of celebrating exceptional students who bagged awards in various categories.

He noted that the students were selected through their academic results and disclosed that the fund for award was provided by Sir Patrick Ikwueto. He expressed optimism that the students, having undergone effective formation in the school, would excel in any career of their choice and beckoned on them to contribute qualitatively to societal development.

Adding their voice, some of the graduated students, Calistus Ezeibekwu, Collins Okafor and Anibuike Collins, said they were ready to face the outside world, having been trained effectively and expressed profound thanks to the school management and their formators for devoting their time and resources towards their holistic growth and development.