The three were ordained alongside eleven other new deacons and five new priests by the Bishop of the Catholic Diocese of Ekwulobia (CADEK), Most Rev Peter Ebere Okpaleke, at Holy Ghost Novitiate Awo-Omamma, Imo State. 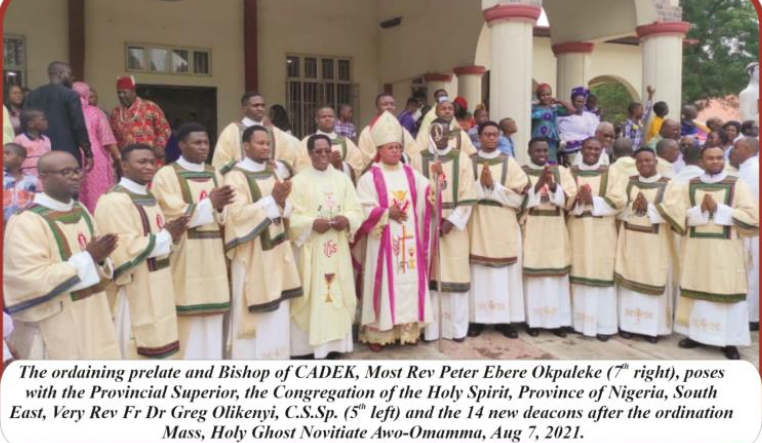 In his homily of the diaconal/priestly ordination Mass, Most Rev Peter Ebere Okpaleke urged the ordinands to hold on to the mystery of the faith, as well as proclaim the word of God by their words and actions.

According to the bishop, the deacons and the priests were not only the hearers of the word of God, but also the preachers of both the word and the mysteries of God.

In an interview with Fides, the pioneer principal, HGAA, Rev Fr John Chukwuemeka Anyaegbunam, CSSp, thanked God for the share he gave the ordinands in the sacred diaconal and priestly vocation.

On whether he anticipated that the pioneer students would be priests, Fr Anyaegbunam, CSSp, who said he was happy over their ordination, expressed the hope that some of the students would toe the line of their religious vocation due to the proper formation which they were given.

‘I was confident that some of the students will become priests because they showed early signs of embracing religious vocation at their formative stage,’ he said.

Pointing out that the formation programme which the students were given was the same as seminary formation, the former HGAA principal stated his conviction that with the good exemplary life of the priests, who, he said, gave the students holistic education, some of the students toed the part to priestly formation.

Rev Fr Anyaegbunam, who is currently the Principal of Father Philip Agu Spiritan Academy, Akabo, Ikeduru LGA, Imo State, encouraged the new deacons and the priests to be dispose themselves to the grace of God so as to be successful in their vocation.

Also speaking, the principal, HGAA, Rev Fr Jude Ekemgba, C.S.Sp, described the ordination of the three pioneer students as testament to the all-round formation and the holistic education of human persons which the school was committed to.

According to Fr Ekemgba, who is also the Counsellor in charge of Education, Congregation of the Spiritans, their congregation, Holy Ghost Fathers and Brothers, had holistic education and proper formation of the individual as its mission and vision.