As part of her programme to identify and develop sporting talents in the students, the Congregation of the Holy Spirit (Spiritans), Province of Nigeria, South East-owned-Holy Ghost Academy Amaokpala (HGAA), Orumba North LGA, Anambra State, on Monday, November 15, flagged off the first phase of her 2021/2022 Inter House Sports Competition.

Declaring the games open at the school field, the Principal, HGAA, Very Rev Fr Jude Ekemgba, CSSp, urged the students to be friendly and exhibit spirit of sportsmanship. 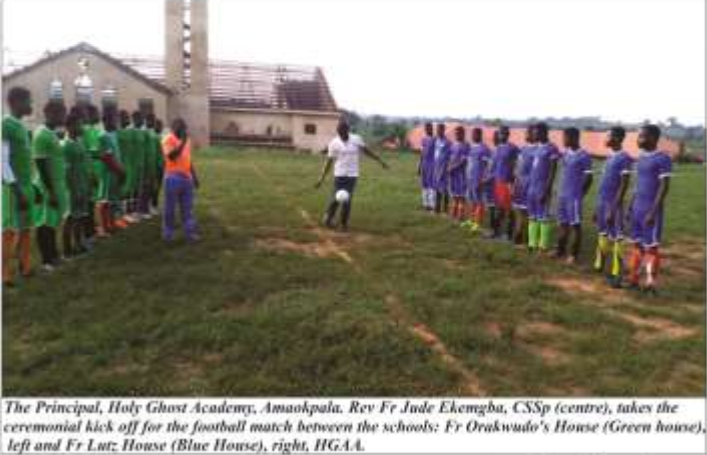 He noted that one of the aims of the inter house sports was to spot out talents and nurture them for the future. According to Fr Ekemgba, who is also the Episcopal Vicar for Religious, Catholic Diocese of Ekwulobia, there was need for sporting talents to be identified and developed in the children in their early stage so as to enable them to choose the right path in future.

Fides gathered that the inter house sports would feature sporting activities such as football, volley ball, march past, tennis and field events, among the school’s houses.

Some of the students who spoke to the press expressed their delight over the various games which formed part of the inter house sports. They stated their conviction that the games would afford them the opportunity to showcase and develop their sporting talents.

The inter house sports is expected to be concluded with the annual Feast Day of the school fixed for March 2022.