The investiture of the latest major seminarians of Awka and Ekwulobia Dioceses was held last Thursday, December 2, at the Holy Family Spiritual Year, Okpuno-Awka, in Awka South Local Government Area of Anambra State.

The annual ceremony which seldom coincides with the feast of the Immaculate Conception, was presided over by the Catholic Bishop of Awka Diocese, His Lordship, Most Rev Dr Paulinus Ezeokafor, and was witnessed by the religious, dignitaries and parents of the seminarians. 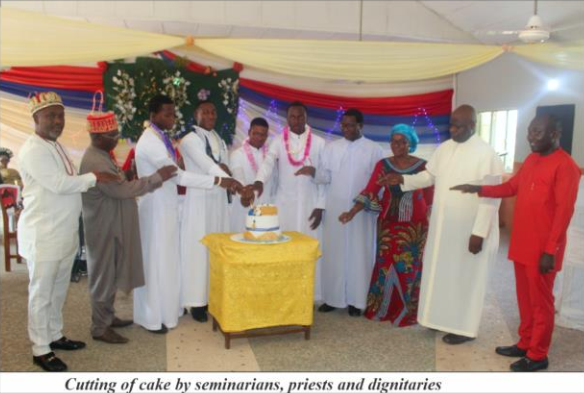 The bishop was received by the Rector of the Seminary, Rev. Fr Linus Ibekwe, who welcomed the bishop, priest and parents of the students, to her annual investiture of the seminarians. Fr Ibekwe who explained that the exercise was significant to the seminarians as they would be vested with their cassock, said the ceremony was shifted forward to December 2 as against December 8 for pastoral reasons.

The bishop, in his homily, raised the consciousness of the newly invested seminarians on the call to service and commitment in their priestly journey. The bishop who maintained that their investiture into the Holy Family Spiritual Year was the first step in the many miles of their journey, explained to them what they needed to do in the spiritual year. 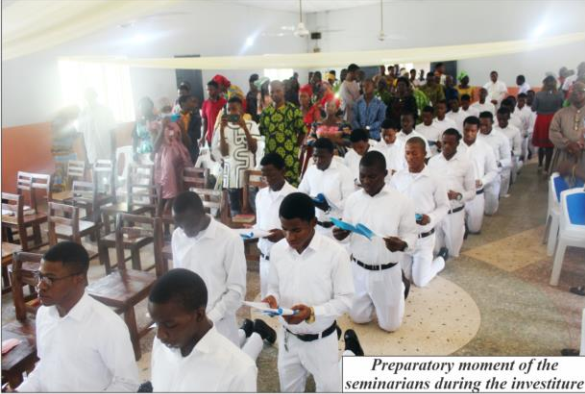 The spiritual year Seminary is where those who want to be priests come to get formated into priesthood. It is one year of spiritual formation where decisions are made. This one year is not where conventional subjects like Physics, Chemistry, and Biology are taught. It is a place for spiritual formation and hearing the call for priestly vocation,’ the prelate explained.

Bishop Ezeokafor who explained that being a good person in the world was better than being a bad priest, charged the vested seminarians to be respectful to their formators and rectors in order to become good priests of the Catholic Church.

His Lordship who blessed the cassock and surplice got the seminarians vested and received the Seminarians into the Holy Family Spiritual Year, Okpuno, for the 2021/2022 session.

Fides gathered that both parents and the newly vested seminarians were gladdened as their dreams of becoming priests was coming near to fruition with the investiture.

Two seminarians who spoke to Fides, Stanley Nwankwo and Nledum Ifeanyi, expressed satisfaction with the investiture, even as they prayed that their journey of becoming priests would come to fruition.

Highlights of the event were fundraising for the building of the Seminary Chapel and song rendition by the Seminarians.