Rev. Fr Dr Edwin Obiorah of the Catholic Diocese of Awka and Director, Equity Chambers, has officially become the first Catholic priest in the world to be conferred with the Senior Advocate of Nigeria (SAN), the equivalent of which is the Queen’s Counsel or King’s Counsel in England.

The Senior Advocate of Nigeria is a prestigious rank conferred annually on legal practitioners who have distinguished themselves in the legal profession. It is also a position conferred on lawyers of not less than ten active years standing at the Nigerian Bar. 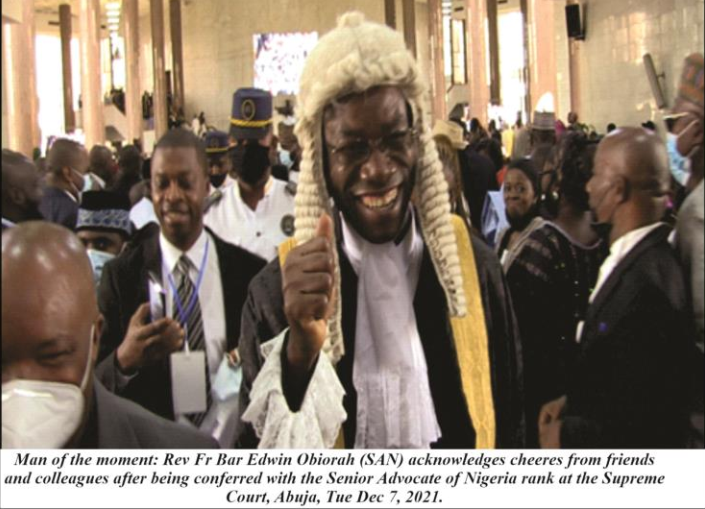 The Chief Justice charged the new Senior Advocates to forge ahead with the right mindset and disposition to attain more impactful results in their career.

Speaking to Fides Media, Fr Obiorah expressed joy as he considered the rank a privilege for him. ‘It is wonderful, it is a sign of fulfillment, it shows that the system rewards hard work,’ he gushed.

The Catholic priest explained that he first applied in 2017, but was not successful. His application was repeatedly turned down between 2018 and 2019, amid controversies that a Catholic priest should not be awarded the rank of a SAN. Fr Obiorah said he rested in 2020 before re-applying in 2021.

‘In 2018, we reapplied. For one reason or the other, we were not shortlisted for reasons best known to those concerned. I know there were petitions and objections from different quarters, particularly people saying a Catholic priest should not be a Senior Advocate of Nigeria. It was a raging issue for some people. Same thing happened in 2019. Then, in 2020, we rested.’

He said in 2021 he applied again and they required four Supreme Court cases. 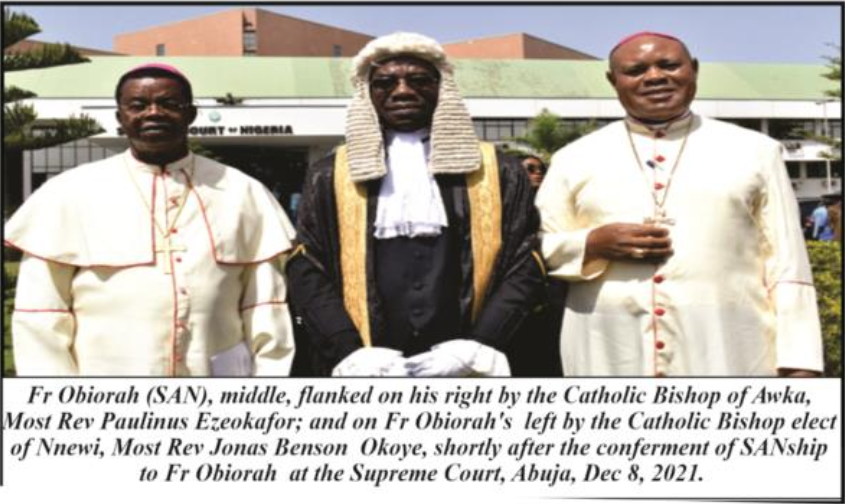 ‘We, with humility, gave them eleven. They required five Court of Appeal cases and with greatest respect, we gave them thirty-five and they then required twenty cases done at the level of High Court. We were humble and we were able to give them fifty-six. They did chamber inspection and went through everything and this time, they decided in their wisdom, that I should be selected,’ he explained.

On Saturday, December 11, a thanksgiving mass was also held by the Catholic Diocese of Awka to show gratitude to God for the life of Rev. Fr Obiorah at the St Patrick’s Cathedral, Awka. Leading in the Mass, Bishop Ezeokafor, in his homily, admonished the new Senior Advocate of Nigeria to always stand for justice and remember that he was first a priest.

Chief Barr. Obi Onyali, SAN; judges, magistrates, royal fathers and other dignitaries, were at the Mass.

A reception also later held at the Cathedral and Mulumba Halls where  Bishops, Judges, Magistrates, Lawyers, as well as  friends, families and well-wishers, celebrated with the Catholic priest.

Appointment of Senior Advocates of Nigeria

Fides investigation reveals that the guidelines for the appointment of Senior Advocates of Nigeria are enshrined in the Legal Practitioners Act 2004 and such appointment is in the full control and management of the Legal Practitioner Privileges Committee (LPPC) which was established by Section 3 of the Act. The LPPC Committee is headed by the Chief Justice of Nigeria and it comprises the Attorney-General of the Federation, President of the Court of Appeal, Chief Judge of the Federal High Court, Five Senior Advocates, and others.

Qualification for the Appointment of a Senior Advocate of Nigeria (SAN)

Section 5(1) of the Act states that for a member of the legal profession to get the privileged award of the rank of a Senior Advocate of Nigeria (SAN), he must have achieved the following;

The applicant must be in full-time legal practice.

Must have distinguished themselves as an advocate.

Must have made a significant contribution to the development of the legal profession in Nigeria.

The rank can also in some exceptional cases be awarded to members of the legal profession who have distinguished themselves as academics by making substantial contributions to the practice of law, through teaching, research, and publications that have become a major source of reference by legal practitioners, judges, law teachers, and law students.

Method of appointment of Senior Advocates of Nigeria (SAN)

For the appointment of a SAN, the call for application is usually made not later than the 7th of January each year or any other date that the LPPC may direct, and such date will be published in the media as stated in Section 9(1) of the Act.

Applications from interested candidates in the prescribed form must also be returned not later than the 31st of March of the year of the application or the date that the LPPC may direct to the LPPC Secretariat at the Supreme Court of Nigeria as stated in Section 9(2) of the Act.

Procedure/Conditions for the Appointment of Senior Advocates of Nigeria (SAN)

The applicant must be a legal practitioner called to the bar and practicing in Nigeria as an advocate and must have been in active legal practice for at least ten years immediately preceding the date of application as provided by Section 18 of the Act.

Every interested applicant is required to pay a non-refundable processing fee of N300, 000 or such other amount that the LPPC may direct to be paid as provided by Section 9(3) of the Act.

To be appointed as a Senior Advocate in Nigeria, the candidate must be a citizen of the Federal Republic of Nigeria.

There must be evidence of current active practice.

The application form shall also require the applicant to provide a list of at least 10 judges of superior courts before whom the applicant had appeared in contested cases of significance and who can confidentially vouch for the applicant’s professional competence as provided by Section 13 of the Act.

Also, the applicant will be required to submit a list of six legal practitioners whom he led against or whom they led in contested cases of significance. Three of the lawyers will be selected by the LPPC to give a detailed written confidential reference about the applicant as provided by Section 13(2) of the Act.

Again, there must be evidence of contribution to legal development through case law and publications.

The applicant must have a standard law office as the LPPC has the duty to conduct a physical inspection of the applicant’s firm at the final stage for the purpose of assessing the level and quality of his facilities such as a library, competent staff, quality of office space, books of account, junior staff or partners in the chamber and other required facilities in the firm as stated in Section 15 of the Act.

The applicant must show evidence of payment of his bar practicing fee and membership dues to his branch of the Nigerian Bar Association (NBA) for at least 10 years before the application.

The applicant must show evidence of pro bono legal services he has rendered to indigent clients, that is, public interest litigation as a form of community service.

Also, the applicant must show evidence of payment of income tax for at least three years preceding the application.

The applicant must demonstrate leadership qualities and loyalty to the profession in Nigeria.

There must be evidence of distinguished contribution to legal scholarship and jurisprudence which has become a source of reference in the profession.

The applicant must have at least twenty copies of outstanding publications of legal works to be assessed by the academic subcommittee of the LPPC.

The benefit of being appointed as a Senior Advocate of Nigeria

An appointed SAN has the exclusive right to sit in the inner bar of the Courtroom.

An appointed SAN has the right to mention any motion in which he is appearing or any other cause or matter for mention out of turn.

He has the right to wear a silk gown.

The appointed SAN is not to appear before courts in civil processes without a junior colleague or another SAN.

The appointed SAN cannot settle pleadings before an inferior court.

The process of appointment includes an oral interview conducted by the LPPC at the final stage of selection to enable the Committee to verify the information provided in the application forms and to also ascertain the applicant’s competence in conformity with Section 5 of the Act.

The appointment of the rank of Senior Advocate of Nigeria can be withdrawn at any time by the LPPC if the following conditions stated in Section 22 occurs;

The SAN has been adjudged by the LPPC to have conducted himself in a manner incompatible with the dignity and honour of the rank.

The SAN is found guilty of professional misconduct by the LPPC.

The appointed SAN is convicted by a Court of Law for any offence which in the opinion of the LPPC is incompatible with the honour and dignity of the holder of the rank such as an offence relating to a breach of trust, theft, fraud, or dishonesty.

For the appointment of the rank of a Senior Advocate of Nigeria, the application is usually considered without regards to the ethnic origin, pedigree, physical disability, marital status, age, religious beliefs, political views, or affiliations as provided in Section 2(b) of the Act, rather the evaluation of the applicant’s competence will be based on his integrity, opinion of judges, general knowledge of the law, contribution to the development of law, leadership qualities, strength and quality of reference received by the applicant, etc, as stated in Section 16(2) of the Act.