His Numerous Projects in Anambra State

It was the Catholic Bishop of Sokoto Diocese, Most Rev. Dr. Matthew Hassan Kukah, who said that anybody who wants to rule us must show what he has done before, and must possess the intellectual capacity to wrestle with national and international problems of Nigeria. As a writer, and ardent supporter of former Governor of Anambra State, Sir Peter Obi (CON, KSS), based on merit, I give brief enumeration of his concrete achievements in the political life of Anambra and Nigeria to show that he is the BEST CANDIDATE for the Presidency, 2023. I shall dwell on salient issues in this regard.

When Peter Obi assumed office as Governor of Anambra State on March 17, 2006, he met an empty purse as there was no kobo in the coffers. He inherited huge debts, among them 16 billion Naira of Pensioners’ Arrears from Mbadinuju’s regime (1999-2003) and ignored by Ngige’s regime (2003-2006).

When Ngige came to office in May 29, 2003, he started paying pensioners from the month of his service, June 2003. He distanced himself from the debts of his predecessor, implying that it was not his responsibility. Obi initiated financial prudence and started paying the pensioners on a four month installment till he cleared it and at the same time paying those of his current months as and when due.

As Obi formulated his economic blueprint of Anambra Integrated Development Strategy (ANIDS), which was a development project from all ministries simultaneously, analysis of these projects should be done on ministry by ministry.

When Obi came to office in 2006, schools were in the monopoly of government, as government seized mission Schools in 1970, after the Civil War. Education declined as teachers exhibited nonchalant attitude to work. School buildings were in dilapidation. Obi knew that government’s monopoly of education was to the detriment of qualitative education.

He noted that in developed countries of America and Europe, education was in partnership with the private sector, especially, the Church, who are experts in education by virtue of their mission of evangelization which they are doing by preaching and teaching the illiterate how to read and write. In Nigeria, it extended to producing a literate populace to serve the colonial masters in government as clerks and interpreters and in the Church as teachers and catechists.

He therefore sent “Executive Bill” to the legislature for a Law to return Schools to private owners, especially the Church. It took a lot of lobbying from Obi to pass through the legislative hurdles as the Nigeria Union of Teachers (NUT) opposed it, claiming that the Church could not pay them, and might even victimize them.

Obi explained to them the terms of the Memorandum of Understanding (MoU) for partnership where the government would be responsible for employment, payment and pensions of teachers, while the Church would take charge of administration, with necessary disciplinary measures, to ensure diligence to duty and training of students in virtues of morality.

In the end, the Bill was enacted into law, returning schools to the mission under a Public Private Partnership (PPP) arrangement. Obi sent huge sums of money to the Church to rehabilitate, renovate and refurbish the schools.

The churches responded positively with what they know how to do best, that is organizing Fund Raising to complement government’s subvention. The era of Old Boys Association returned and schools regained their pride of place as it was before government’s takeover. 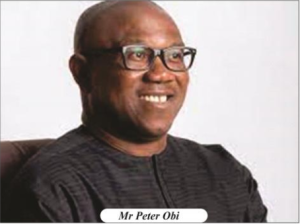 Obi, lover of education, always said that education was the greatest currency that the present generation could bequeath to future generations. He sent another Executive Bill to the legislature to incorporate computer literacy in the curriculum of secondary schools and succeeded. He supplied the schools with numerous computer sets and science laboratories.

He also revived Government Technical Schools and education took pragmatic turns in line with modern trends.  Anambra students began to take the first position in national and international competitions. When Obi came, the Anambra State University, with campuses in Igbariam for Arts and Business courses; in Uli for Science and Engineering courses, and Amaku-Awka General Hospital for University Teaching Hospital, were in their original structures of secondary school buildings from where they took off.

Peter Obi started all the buildings from the scratch and erected magnificent edifices for them. The Teaching Hospital, Awka had hostels for students’ boarding. He sent an Executive Bill to the legislature to rename the University to CHUKWUEMEKA ODUMEGWU OJUKWU UNIVERSITY to immortalize the Igbo legend, Ikemba Odumegwu Ojukwu.

General Hospital, Onitsha, was a premier hospital serving the metropolitan city. After the civil war, the Administrator of East Central State, Dr. Ukpabi Asika (1967-1975), renovated and refurbished it to optimal level and secured accreditation from the Nigeria Medical Council (NMC), for final year students from the University of Nigeria, Nsukka (UNN), to use it as centre for the medical Housemanship Course.

The army takeover in 1975 plunged it into an abandoned project, and the equipment depreciated. The NUC withdrew accreditation in 1997 and medical students stopped using it for their Housemanship course. When Obi came, he renovated, re-furbished it and regained its accreditation and returned Housemanship Course there. Many government hospitals, in both urban and rural areas, received Obi’s attention.

Obi went further in qualitative health care delivery, by involving the Church in the service. He always acknowledged the Church’s specialization in education and healthcare, and sent huge sums of money to the Church, especially the Catholic and Anglican Churches, to re-enforce their qualitative health services to the people.

When the army created Anambra State in 1991, they built one building for the secretariat and quartered other numerous ministries in rented houses.

When Obi came in, he established financial prudence and built two other magnificent edifices and accommodated tenant-ministries in them. He also rebuilt the government’s property burnt by political thugs in 2004, while also building the State Fire Service House, along Onitsha-Enugu Expressway, at Ezeuzu Junction, Awka. He built the Ekwueme Square with huge podiums and also paid attention to the welfare of civil servants.

No permanent secretary had an official car but Obi reduced the number of vehicles in his convoy, and appropriated the money in buying cars for Permanent Secretaries and Senior Directors. He also bought cars for Judges and Magistrates and built Residential Quarters for the Judges. He also built Stock Exchange House, at Onitsha, and invited the National Director, Dr. (Mrs) Ndii Okereke, for commissioning, who eulogized Obi for his pragmatism in commerce and industry.

When Obi came, there was no tolerable road in Anambra State, except a few kilometres of roads in the hometown of his predecessor, Ngige, at Alor and Idemili North and South Local Government Areas, of Ngige and few other ones in few places. Obi embarked upon roads, both at urban and rural areas, with bridges.

He dualised the Old Onitsha-Enugu Road, beginning from Amawbia through Eke-Awka to Agu-Awka, and to Amansea en-route Enugu State. Iyiagu Stream, Awka, along Onitsha-Enugu Expressway, and Otuoye Stream, Onitsha, along Bida Road, Odoakpu and Creek Road, as well as Silas Road, Fegge, which encroached into the houses of neighbouring residents and destroyed their property.

Obi’s predecessor, Ngige, ignored the clamouring of the people but it was Obi who promptly rescued them in 2007 upon assuming office after impeachment. Obi’s numerous roads and bridges, were conspicuous in both urban and rural areas.

He rebuilt it with standard football pitch, 8-lane tartan tracks, and volleyball fields. When it was commissioned on July 8-10, 2008, Obi invited two sports legends, Kanu Nwankwo (Football) and Mary Onyali-Omagbani (athletics) to serve as role models for youths. He granted three-free days for pupils and students in government schools, to witness the commissioning and emulate Kanu Nwankwo and Mary Onyali.

Mary conducted coaching courses for the pupils/students and their games masters/mistresses for three consecutive days. He also removed the local government office at the Government Field, Fegge-Onitsha, to another convenient place and reclaimed the land for a sports stadium and actually built the sports stadium at Fegge-Onitsha South LGA.

Obi initiated the Awka Township Stadium and reclaimed the land which had been converted into a huge lake through years of neglect and overgrowth by forest. He leveled the place with laterite. He also built the spectator stand, manifesting in an international sports stadium springing up.

It was at the then on-going stadium that he flagged off the campaign of his successor, Willie Obiano, in October 2013, and promised Awka indigenes and residents that his successor would complete it from where he left. It is preposterous that when Obiano commissioned it on December 28, 2021, the inscription on the foundation stone said that it was “INITIATED, COMPLETED AND COMMISSIONED BY WILLIE OBIANO”. For historical accuracy, the present Soludo Government should change the narrative and write that the stadium was “INITIATED BY PETER OBI in 2012 AND COMPLETED AND COMMISSIONED BY WILLIE OBIANO IN 2021”.

In spite of the fact that Peter Obi inherited an empty purse with huge debts (deficit balance) from his predecessor, Dr. Ngige, in 2006, he, Obi, bequeathed a glorious treasury, (surplus balance) of N75 Billion to his successor, Willie Obiano, in 2014.

These are only a tip of the ice-berg of what Peter Obi did in Anambra State, (2006-2014) which prompted President Goodluck Jonathan to appoint him as a member of the National Economic Council in 2010 so that he, Obi, could lend his administrative savvy and financial prudence to the Federal Government.