His name is Delegate

Between the Old and New Testaments, there was a priest of God called Zechariah. He was an upright man of God. He married a good woman whose name was Elizabeth. Unfortunately, they were barren till old age. One day, it was his turn to offer incense in the temple before the Holy of Holies.

The people were outside waiting for him to come out and communicate God’s message to them. Suddenly, an angel of God appeared to him inside the temple and he was frightened. The angel calmed him down and said, “Do not be afraid, Zechariah, be assured that your prayer has been heard. Your wife Elizabeth will bear a son and you shall name him John.

He will bring joy and gladness to you and many will rejoice at his birth” (Luke 1:13 – 14). Zechariah laughed and thereby doubted the actualization of the divine message. For this reason he was struck dumb by the angel until the fulfillment of the message. Elizabeth conceived in the natural way through the instrumentality of her aged husband Zechariah.

After nine months of pregnancy, the old woman Elizabeth gave birth to a bouncing baby boy (BBB). On the eighth day, the kinsmen of the old couple came to circumcise the miraculous baby boy and to name him. They wanted to call him Zechariah after his father.

But the mother resisted. She insisted, “Not so; he shall be called John” (Lk.1:60). The kinsmen rejected the strange name John. When the argument persisted, they made a signal to the dumb father to ascertain what name he would like to give to the child. Consequently, he asked for a writing tablet.

They gave it to him. To their surprise he wrote, “His name is John” (Lk.1:63). Wonders shall never end. Immediately, the power of his speech returned. Great joy intoxicated the family and the guests. It was double joyful celebration.

Wonders continue to happen till date. Few days ago, a poor middle aged couple came into my office, carrying a new born child of one month. They came to register him for our bi-monthly baptism of water. I welcomed them warmly with smiles and appreciated God for blessing them with the third child. Then, they sat down happily before me.

Then I asked them the name which they wish the child to be given. As if a whistle was blown, the couple shouted, “His name is Delegate!” I emotionally stood up and exclaimed, “What! What do you mean? This is a strange and an embarrassing name.

It is also unchristian and ungodly.” The miserable couple also stood up and shouted, “Please father, leave it so for us! We have suffered! Since our marriage seven years ago, we have been eating from hand to mouth. We received the name from a vision so that our lives would be better. This child is our own little messiah.” After series of argument, I sat down. I asked them to sit down and let’s trash it out. They obliged.

Now with a calm and fatherly voice, I asked them the meaning and why they wish their child to be named Delegate. In his message on the 2022 World Communication Sunday, being 29 May, the Holy Father, Pope Francis, admonished all and sundry to give a listening ear to the plight of others. Therefore, I gave them my entire two ears. Even, I gave them additionally my two eyes and nose. Gradually, they explained to me the reason why they chose that name Delegate. 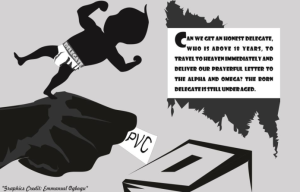 They convincingly told me that the delegates who attended the primary presidential election of a political party in Abuja recently returned with bags of Naira and Dollars. One of their neighbours was a delegate to the primary election.

He bought a new jeep immediately he came back from Abuja. Also he has pulled down their ancestral house and has started the construction of one storey modern building. His family members are now eating and dinning like angels. Hence, when their son grows up as a born delegate, things will improve for better in their family.

On hearing this, laughter turned me upside down. I capsized like a boat. The couple was gazing at me in utter confusion. They told me that Delegate is not an amusing name. It signifies opulence and a lot of fortunes. I ask them that my bishop’s approval of the name must be obtained. Therefore they should go home until they hear from me. When I went to see my bishop, I was informed that he went for his annual leave.

After three days, the anxious couple came back to me to ascertain if the name has been approved. I told them that my bishop was on leave. Also I informed them that my bishop was just elevated to the rank of Cardinal by the Supreme Pontiff and he will travel to Rome at the end of his leave for investiture by Pope Francis. The couple shouted, “Glory be to God in the highest! Please father, we have a new request.

Kindly baptize our little son with the name Cardinal Delegate, so that he can travel to Abuja to bring bags of money for us and also fly to Rome to make holy investment for the progress of our indigent family.” I couldn’t control my laughter. After few minutes, I looked the couple straight into their eyes and exclaimed, “You are not serious! Manner no longer falls from heaven. Out of the sweat of your brows, thou shall eat!” They glanced at me hopelessly. Then they went home sorrowfully.

From the radio station broadcasting from my backyard, I heard that the recent party primary election conducted at the Capital Territory was a cash and carry affair. Victory went to the highest bidder. Many delegates disappointed their presidential candidates as they struggled for naira and dollars at the primary election.

Manner really fell from nowhere. The delegates harvested as much as they could. One of them knelt down and prayed, “If Party Primary Election is like this, then let’s have it every week.” To avoid armed robbers, kidnappers and bandits, most of the delegates traveled home by air. They learnt from the wise Cat, who said whenever it defecates, it covers the excreta with sand, in order to avoid another claiming ownership of it.

Many electorates sell their conscience for money; thereby electing bad politicians into power. When such evil minded leaders ascend to their political thrones, their pockets become their constituencies. They jettison their campaign manifestoes and dash the hope of the electorates.

Money politics has destroyed the fabric of democracy in Nigeria. Electoral victory bought with money does not pay. The money bag leaders on assumption of office become more corrupt by squandering public fund. The dividends of democracy elude the common people who voted them into office.

As the 2023 General Elections approach, we must shine our eyes. First of all, we must obtain our Permanent Voters Card (PVC). With it we can rightly perform our civic responsibility by electing God-fearing politicians into various offices. Every Nigerian from 18 years and above has the inalienable right of franchise. He or she can vote or be voted for.

Without the PVC we are powerless and should not complain when bad leaders are elected into office. Secondly, we should not be materially induced to vote for any candidate. Let us not sell our consciences and complain later. Whereby you are forced to receive money before voting, take it and vote the right candidates. We ought to defend our votes after casting. Thank God the results will be transferred electronically by 2023. By so doing, the falsification of results shall be drastically reduced.

I wish the voting itself shall be electronic also. All it takes for our nascent democracy to grow are free, fair and credible elections. We pray that the worsening insecurity bedeviling this country may not creep into the election year 2023. If it does, no one may be safe to come out and vote, because life is the primary value. It is only the living that can vote.

As we pray for God’s intervention, we look up to the Federal Government to safeguard the lives and properties of her citizens now, before, during and after the forthcoming general elections. Can we get an honest delegate, who is above 18 years, to travel to Heaven immediately and deliver our prayerful letter to the Alpha and Omega? The born Delegate is still under aged.