The Vice Chancellor, Nnamdi Azikiwe University Awka, Anambra State, Professor Charles Okechukwu Esimone, says there is no increase in tuition fees for students of the institution.

Esimone said other dues like faculty, department, association and others, were not increased, but, instead, Nnamdi Azikiwe University had maintained the fees the way they were since 2019 till date, without any intention to overburden the students now; especially with the current excruciating economic realities in the country.

Students of the institution had earlier in the week, staged a massive protest over alleged increment in fees by the institution, blocking major highways in the institution’s vicinity. They displayed various placards with inscriptions which condemned the alleged hike in fees. 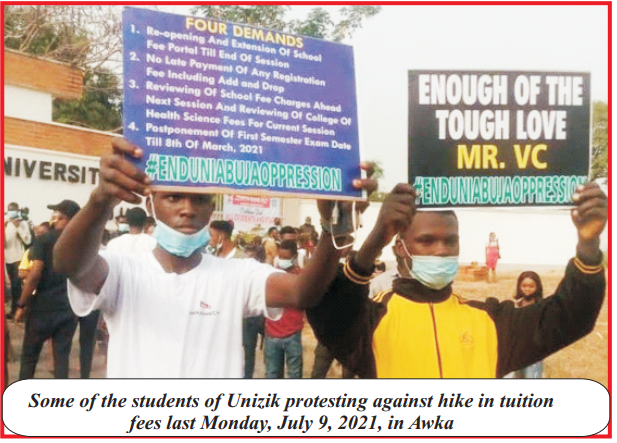 But the Vice Chancellor of Unizik, Prof Esimone, speaking in the aftermath of the protests, through a press release signed by the Ag. Head of Information and Public Relations of the institution, Chika Gladys Ene, and made available to journalists in Awka, said the general public should disregard a certain misleading information trending on the social media about a purported hike in school fees in the institution.

He said such wrong information was capable of causing chaos, as well as jeopardizing the peace and tranquil atmosphere being enjoyed in the university; adding that Nnamdi Azikiwe University was known for academic excellence and production of quality graduates.

The release read, ‘The Management of Nnamdi Azikiwe University, Awka, has come to note the rumour on a purported increment in tuition fees of returning students of the institution for 2020/2021 academic session being spread on the social media.

‘For clarity, the University Management has not increased tuition fees for students since harmonizing fees payable by students in 2019, which include dues such as faculty, department, association and the convocation fee for graduating classes.

‘As such, the news making the rounds of an increment in tuition is not only false but misleading and an attempt to cause unrest in the university.

‘We urge our bona fide students, staff and the general public to treat as false, the news of the purported increment as it remains a false alarm, triggered towards destabilizing the peace being enjoyed in the university.

‘Prof Esimone created the new Counselling and Careers Development Unit and has paid consultants who trained 70 staff (teaching and none teaching); at least three from every faculty, more from the registry. Why? Most students find it difficult to get jobs on graduation due to lack of guidance.

Most students don’t even have career plans on graduation. Majority waste up to 10 years before they find their bearing. Majority do not even have ideas what a good CV should look like. Next week the Deans and HODs will get the plan for expanded training because 70 people will not be enough to attend to all the students.

‘He has created a clearance software which will enable students to carry out their final year clearance without visiting any office. How? Log into your profile. Apply for final clearance. Your request immediately becomes activated on the dashboard of your DCO (Department’s Clearance Officer). If the DCO clears you, your request activates on your FCO’s dashboard,’ the statement read further.

On security, alumni, students’ affairs and to Bursary, the statement continued, it was the same easy process of clearance, with the cleared letter being activated in one’s profile to be printed out.

Meanwhile, one of the students who spoke to Fides, Miss Chidimma Nwaribe, a 200 level Mass Communication student, explained that the protest started on Monday, July 12, at Garba Square, where the students converged from where they proceeded to the Administration Block to speak to the Vice Chancellor, Professor Esimone, who was not able to speak to them as at then.

She further said the tuition fee was formerly 21,000 Naira, but that within a twinkling of an eye, it had increased to 55,000 Naira, a development she described as outrageous.

‘The acceptance fee also was increased from 25,000 Naira to 45,000 Naira. The fee increment affected the freshers, as well as the old students,’ she claimed.

Speaking with another protester, John, a 400 level Computer Science Education student, disclosed that the Vice Chancellor was able to address them on the second day of the protest.

‘The Vice Chancellor asked us to bring our representatives within 24 hours who would speak on our behalf but we refused because there is a possibility of them being pressured to agree to their terms and conditions against the wishes of the students,’ he said.

However, a 300 level Political Science student who chose to remain anonymous, expressed his unhappiness at the increment of the tuition fees and also how the grounds for such were not communicated at all.

He said, ‘The students were not informed at all and we are not backing out of this protest until a positive change is effected.’

‘We would go into dialogue with the management, we have a listening Management and they will definitely look into the matter, that’s why they gave us 24 hours to adjust the problems. Students on their part, go through a lot; some are training themselves in school, some equally know what their parents go through to pay fees and so many other factors,’ he said.