Last week in Lagos the governor of Anambra State, Prof Chukwuma Soludo, was in Lagos to talk security with ndi banyi living there. It was in furtherance to his efforts to find a solution to the lingering security crisis in the state that shows little signs of abating. It is indeed getting to a situation where no one will bat an eyelid when they hear that people or anyone has been killed by these monsters in human forms roaming our land. That is because of the regularity of killings going on around here. 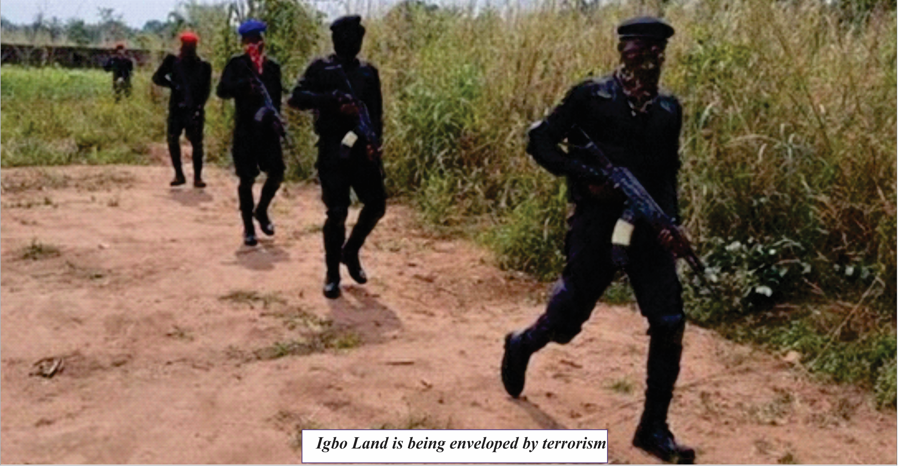 When I was in Lagos many years ago, I noticed that one of the ways of identifying newcomers was by the way they looked at dead bodies lying in many places on the streets. While the regular Lagosians would simply overlook the bodies and continue on their way, the newcomers would stop and stare in shock, having obviously come from places where life was still largely respected.

Soon, the land of the east will become like the Lagos of those days where only those from outside will be shocked by what they see; for, indeed, what could be more shocking than the sight of the military couple recently slaughtered somewhere in Imo State by these beasts in human form? We watched the video in which the couple’s throats were slit and placed on their bodies while the killers gloated like a pack of hyenas that just cornered a prey. So disgusting!

But that was not even the height of the atrocious behaviour of these goons. It wasn’t long that one of their camps in Imo State was raided by security forces and a shocked world was made to see roasted human body parts that they ate. Some were hung on the kitchen wall, some lay near a hearth after they had just been roasted, while fresh bodies were dumped inside a hole for preservation until they were needed. This really made one to wonder how humanity had sunk to such lowest level.

I cannot but feel deeply sorry for our governor whose efforts to take the state to better heights are being hampered by the activities of hoodlums who want to drag others down to their sordid level in the guise of fighting for the freedom of those they’re killing.

Naked fear pervades all over the state now as the people of the state are becoming increasingly scared of venturing far from their homes. It is now no more a situation where Mondays are no more ”sacred” days as attacks are launched daily and virtually everywhere. The pattern of the attacks points to a guerilla warfare which is very difficult to contain as no one knows where the next attack will come from.

But then, every such attack has come from a base and that base is located in a village or community. This then means that those in such localities can have a clue of where the attacks emanate from. It is therefore people from such places that the security agencies can rely on to provide useful information as to the whereabouts or hiding places of the hoodlums.

This dance, as the Igbo would say, is no longer such that anyone can dance holding his snuff in the hand. The situation has become alarming and very dire, such that the days of sentiments are fast going. It is nearing the stage where it will be a case of ”consume or be consumed”. It is no more a case of siting aloof on the fence. Flying bullets do not distinguish where one stays or does not stay. Again, no man is an island. It is either one is got or the person’s person is.

As Soludo enjoined us, this is the time to reclaim our space from those unfit to be called humans. Let’s really sit back and think deeply about our situation. We can on our own decide how best to put a halt to this madness; whether as individuals, groups or communities. It is either this or we get caught up in the looming catastrophe.