The remains of the matriarch of Uzoezie Family, Ifite Village, Aguluzigbo, Anaocha LGA, Anambra State, the late Ma Josephine Mgbokwu Ezioukwu Uzoezie, were on Friday, August 6, 2021 (the Feast of Transfiguration of the Lord), interred at her compound, after a concelebrated burial Mass. 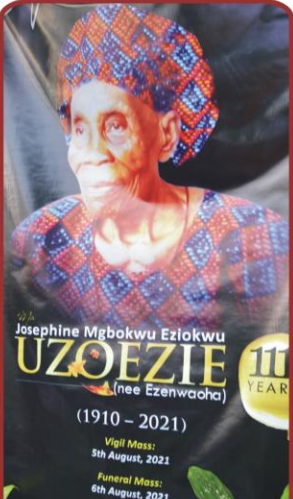 Matriarch Uzoezie, who died at the age of 111 years on May 27, 2021, was survived by her three sons who are the Chairman, Awka Catholic Diocesan Priests’ Fraternity (ACDPF), Very Rev Fr Peter Val Uzoezie (Fada Piccos); Hon Jonas Okeke Uzoezie and Mr Innocent Uzoezie, as well as other numerous relations.

Speaking at the event, the deceased’s son, Rev Fr Uzoezie, described the burial ceremony as a heavenly birthday for the matriarch. According to him, the deceased had refused birthday celebrations for her while she was alive, requesting rather that the birthday be celebrated for her when she must have joined the saints in heaven.

Fr Uzoezie, who noted that the burial ceremony coincided with the 32 years of his priestly anniversary and the birthday of Anulika Uzoezie, whose mother had attended his priestly ordination with the pregnancy and had been delivered before the end of the ordination, thanked God for the practical Christian life and fulfilled old age he blessed the matriarch with.

The ACDPF chairman appreciated the over 300 priests from Awka Diocese, Ekwulobia Diocese and beyond, who joined in both the vigil and burial Masses for the repose of the soul of his mother, for their solidarity. He commended all who wished the family comfort over the loss for the goodwill.

In his vote of thanks on behalf of Uzoezie Family, Ezeabasili Family and Umewedo Kindred, the Owelle of Umewedo Kindred, Senator Victor Umeh, OFR, extolled the mammoth mourners and sympathisers for what he described as their overwhelming support.

He described the deceased as a devout Catholic, ideal women’s leader, an exemplary mother and a very prayerful woman, who desired and supported his son to priesthood.

Recalling the personal relationship he had with the deceased and how the matriarch had told him that she would transit with the saints, Senator Umeh described Ma Uzoezie as his prayer warrior and a treasure whose death was very painful.

The children in a tribute that was signed by Hon Jonas Uzoezie, eulogised their late mother as a model of love, care and ideal motherhood, whose death left their hearts devastated.

Earlier, at the concelebrated burial Mass for the deceased at St Patrick’s Catholic Church, Aguluzigbo, the Auxiliary Bishop of Awka Diocese, Most Rev Jonas Benson Okoye, prayed God to grant the soul of the deceased eternal rest, console the bereaved family and grant the living the grace of good life that bore true witness to God. 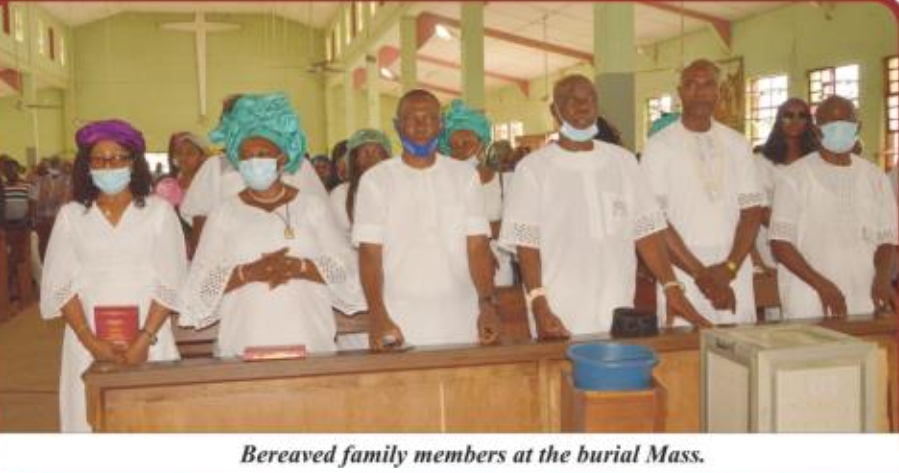 In his homily, Most Rev Okoye thanked God for the exemplary and devout Christian Life which the deceased lived. According to him, the matriarch had with the husband given proper formation to the children, and gave God the best among them for priesthood.

The bishop charged the bereaved children and relatives to uphold the life of steadfastness in faith which their mother, who, he said, was a Catholic to the core, lived and died a happy Christian left behind.

The concelebrated vigil Mass, which held at the deceased’s compound on Thursday, August 5, 2021, was led by the Bishop of the Catholic Diocese of Ekwulobia (CADEK), Most Rev Peter Ebere Okpaleke.

In his homily on the vigil Mass, the Bishop of the Catholic Diocese of Awka, Most Rev Paulinus Chukwuemeka Ezeokafor, tasked all on proper care of both the physical and spiritual nature, which, according to him, made up the human nature.

Bishop Ezeokafor advised the living against holding on to the things of the world which he described as ephemeral, but to instead, spend their life in anticipation of heaven which was a necessity.

He prayed God to bless those who took care of the deceased in her old age with healthy long life.