People, who tend to lighten up their natural complexion with bleaching creams have been advised to desist from such habit, lest they risk falling prey to cancer.

The health expert, who spoke on “Cleanliness”, advised all to be appreciative of their complexion, as well as to be beautiful in their skin, and not to make mess of their God-given beauty with bleaching creams. According to her, bleaching cream was not a form of cleanliness, but a habit for dirty people. 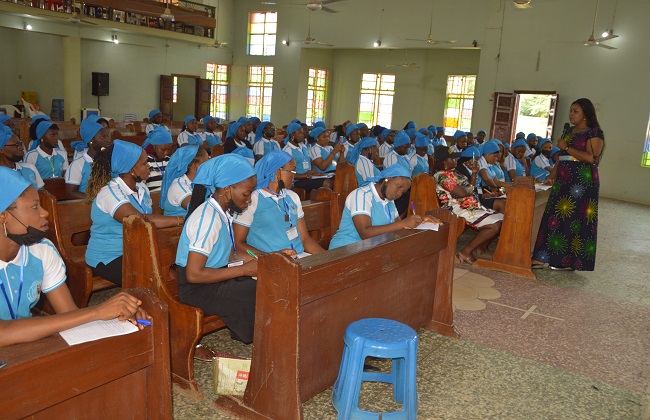 She equally advised all against regular use of antiseptic soaps and tube creams that contained steroids, saying that the two were dangerous to the body. Ikeuwakwe noted that most creams in tube form contained steroids and ought not to be applied on the human body.

Pointing out that there was no limit to the number of times people should take their baths, Pharmacist Ikeuwakwe advised all to bathe as much as they could, as well as rub good body creams thereafter so as to maintain optimum cleanliness.

To avoid what she described as nauseating smells, the health practitioner encouraged people to take their baths after heavy work such as cooking, farming and pounding of foo-foo, as well as maintain proper dental hygiene.

Speaking on proper menstrual hygiene, the pharmacist advised ladies against the use of  tissue papers when they walk around, warning that the debris of the paper might affect their fertility. She explained that poor menstrual hygiene and poor treatment of infections would lead to infertility in females.

The community health practitioner also counseled people to avoid feeding on junk, taking of alcohol and excess sugar, saying that they were harmful to the body. Pointing out that water was a natural cleanser and neutralizer, Ikeuwakwe urged all to drink water regularly so as to cleanse their body.

She described fruits as natural drugs and enjoined people to take more of fruits and vegetables. This was even as she warned against taking such hot drinks as kaikai, saying that it was harmful to the body. She explained that taking hot drinks even to soothe menstrual pains, was harmful to the liver and the womb.

The pharmacist identified pawpaw, sour sop, soyabean and udeaki as some of the fruits which married men and women needed to take to boost their fertility and improve their body. She added that pineapples, tiger nuts and coconut were very good for women, while cucumber and banana, enhance male fertility.

According to her, eating of carrots and tomatoes was good for the eye, while walnut and garden egg were good for the heart.  She however advised ulcer patients against eating of oranges, pineapples and beans, due to their acidic nature, and that when they take either of them, they should dilute it with enough water.

In an interview with Fides, one of the participants at the seminar, Miss Cecilia Ifediora of Ss John & Paul Parish, Awka, described the maiden seminar/workshop of MLGA as worthwhile. Miss Ifediora, who expressed her delight over what she described as the rich lectures and training given at the event, stated the importance of vocation skills to the girls.