Like the politics of many other states in Nigeria, we have the Senatorial Zone considerations, the political party loyalties, the ideological struggle, and ethnic sympathies, all serving as wedges between the people. While the electioneering for 2021 advances, these factors must be at the front burner as Ndi Anambra decide. 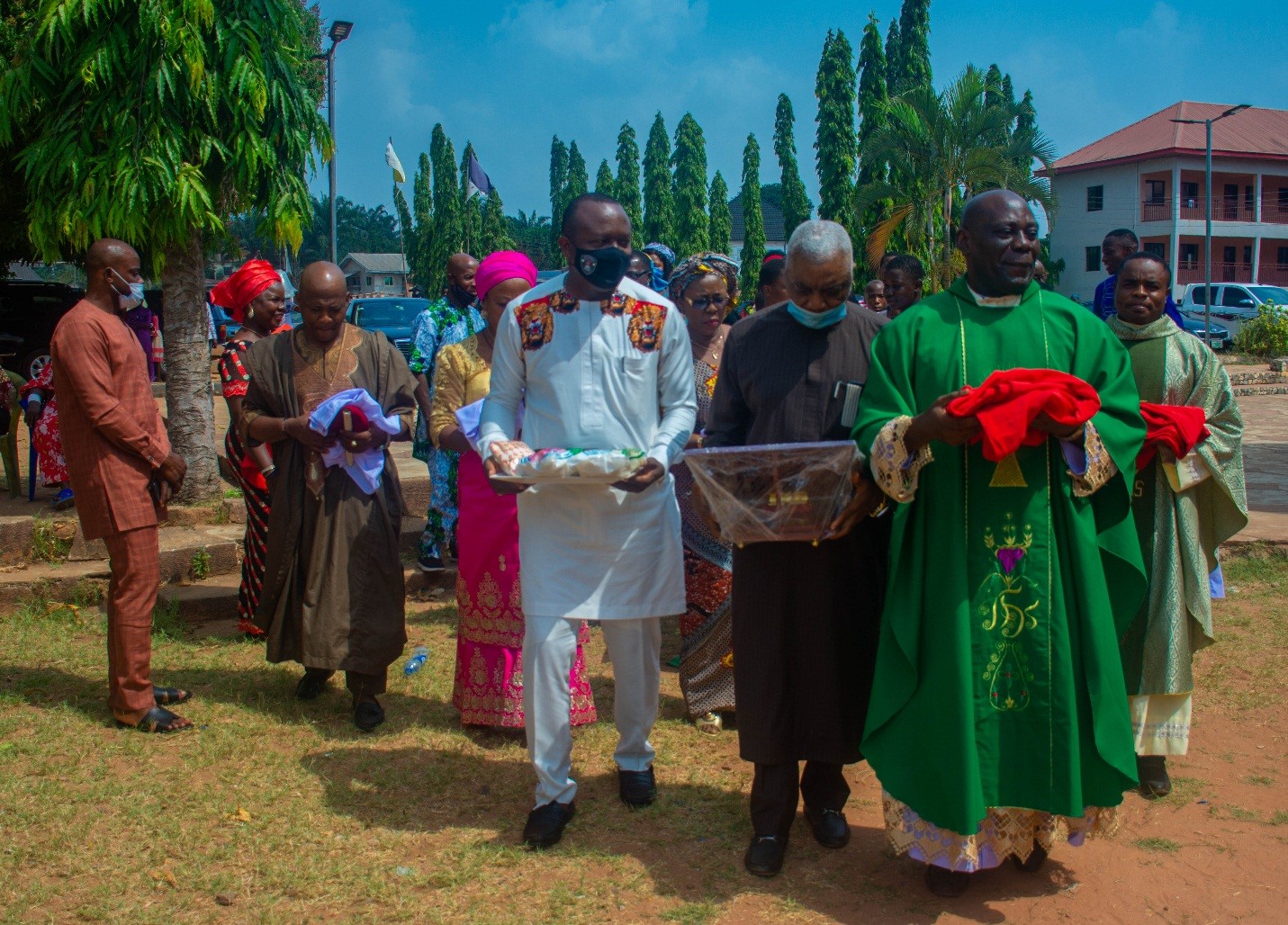 Val Ozigbo, in white, 3rd from right, identifies with all religious denominations

In all these factors, only the North-South-Central Senatorial Zone trichotomy has been given open concerted discussions by way of the widely accepted zoning system in Nigerian politics.

Party loyalties have never been a substantial factor in Anambra politics since the people choose the personality first and then follow them to their party. It was only in the last political season that some principal political actors, for selfish reasons, counted their gains over the good of the people and injected party loyalty in Ndi Anambra’s choice.

If Anambra people had a strong party affiliation, that party was the Peoples Democratic Party (PDP). Political observers attribute Chinweoke Mbadinuju’s election as governor in 1999 to the popularity of his political godfathers. The same goes for Chris Ngige, who was also of the PDP.

Peter Obi had no party during the more significant part of his campaigning. He only announced his party platform close to the deadline stipulated by the national electoral body. When he took on the All Progressives Grand Alliance (APGA), the party had not enjoyed any popularity or acceptance among Ndi Anambra, but they followed Obi to the party.

So the rise of APGA was propelled by the personality of Peter Obi. But, Obi had always been a PDP man who embodies Ndi Anambra’s dreams and aspirations and those of Ndi Igbo at large. So, when he left APGA, he took with him the philosophy he represents, and APGA went out of breath and began to die. 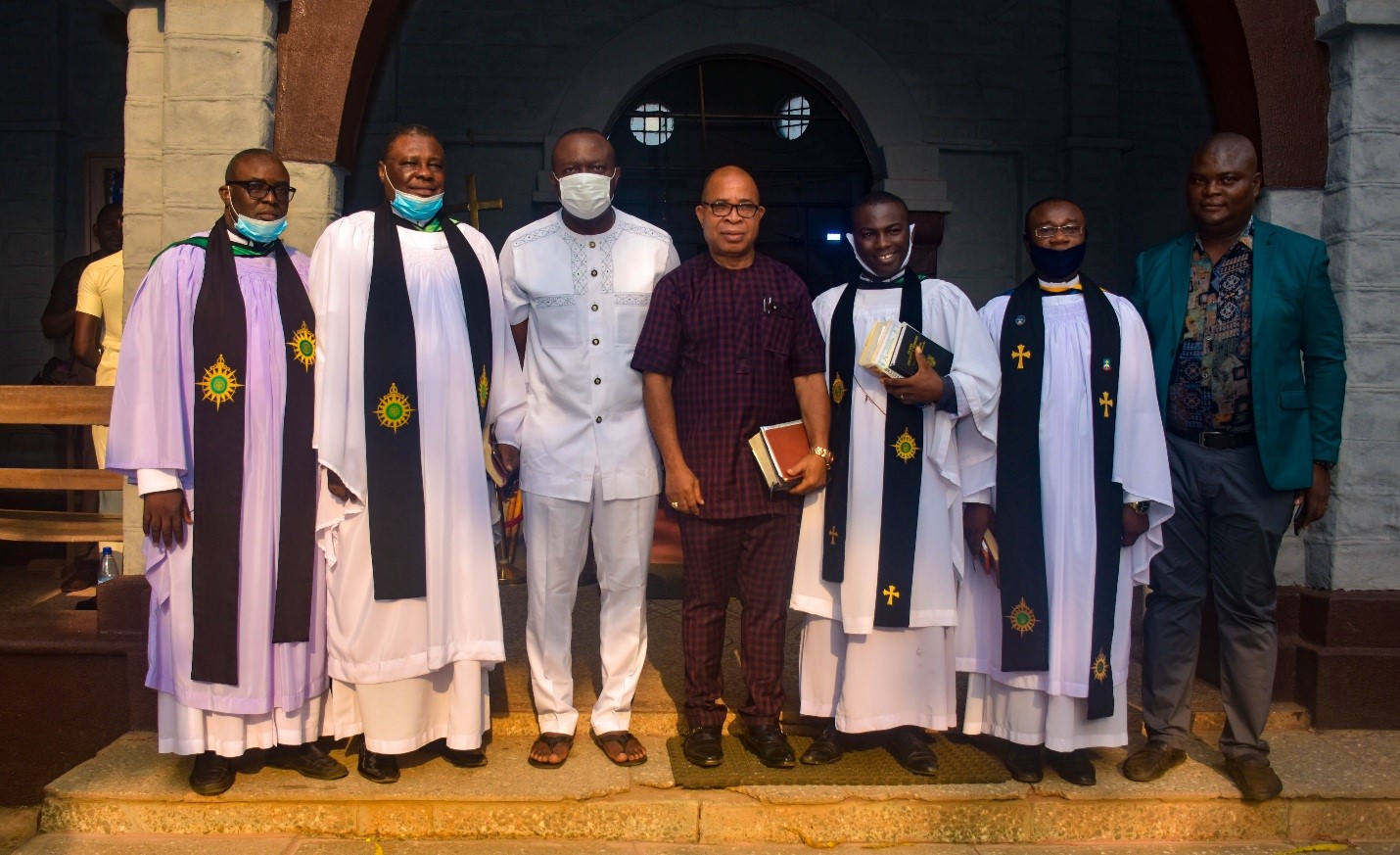 Valentine Ozigbo, a Catholic, poses with some Anglican priests. He does not segregate

In most communities in Anambra State, the Catholic-Anglican divide started with the advent of Christianity in Igbo Land and how their forebears embraced the nascent faith. What began as disagreements on doctrinal differences grew into a mutual suspicion that has extended into the social and political life of the people over the years.

When the Pentecostal denominations sprouted in Anambra, thanks to the Nwachukwu family, they too soon found themselves enveloped in the existing competition, suspicion, and mistrust between the two dominant sects.

There are cries of marginalization and allegations of domination from all the denominations, covering almost every sector. For instance, in the educational sector, we have the Federal Polytechnic Oko; Federal College of Education (Tech) Umunze; and Nnamdi Azikiwe University, Awka.

These three institutions are led by people of different faiths. In the various faculties and schools, the same sentiments abound.

However, this denominational divide did not stall the progress of the state. Appointments, employments, projects, representations and programmes, to an appreciable degree, took into account these divisions and public offices were handled with commensurate sensitivity to this state of affairs.

The age-long dichotomies and mistrust between Catholics, on one hand, and the Anglicans and Protestants on the other, were made worse by the disposition, actions, and leadership style of the incumbent Governor, Willie Obiano.

He is a Catholic, and his administration engaged in several feuds with the Anglicans. Many of these were unnecessary, avoidable, and unfortunate and could easily be interpreted, given the power construct, as repression and marginalization.

During Willie Obiano’s tenure, the cries emanating from the Anglican divide became alarming. When one takes a closer look at the diversity of his appointees, his cabinet’s composition, social interactions, and body language, one cannot blame the Anglicans for feeling the way they do.

It is essential to mention that Obiano’s immediate predecessors, Chris Ngige and Peter Obi, were both Catholics and that their administrations did not experience this level of division between Catholics and Anglicans.

These previous governors were more sensitive to the diversity and default sentiments of Ndi Anambra. By his actions and inactions, Chief Obiano has made the denominational divide a principal talking point in this political season.

The Catholic-Anglican-Pentecostal divide runs deep, and while the contention for Agu Awka is on, the talk about the denominational divide will be gaining momentum. The denominations are not showing signs of coming to the roundtable and deciding for a rotational candidacy like the politicians have done with senatorial zone rotation.

As the politics of 2021 heats up, politicians will seek to divide, using different bases to do so, as long as they perceive that the divisions favour them. Unfortunately, church denomination is one of such artificial divisions weak politicians will try to capitalize on to gain traction.

Despite these common political tactics, Ndi Anambra should not forget what’s essential in making this choice.

Dangers of marginalization and suppression loom when an incompetent mediocre is shown the way to the Government House, simply because he or she is Anglican or Catholic or Pentecostal.

Valentine Ozigbo has demonstrated – what he calls the 4Cs for leadership, throughout his storied career –  Character, Competence, Capacity, and Compassion.

It is important to note that he is not bringing his denomination to Ndi Anambra to qualify him for the governorship. His resume fits into the right measure of the 4Cs needed to heal Ndi Anambra and move the state to greater heights.

Val’s Christianity begins from the Catholic Church and spans into any space where Christ is Lord and Saviour. A member of the Catholic Charismatic Renewal, he has grown a spirituality centred on sacrifice for humanity.

When his parish priest, Monsignor Pascal Nwaezeapu, initiated the idea of creating a Catholic gospel music platform, Valentine Ozigbo, along with billionaires like Leo Stan Ekeh and other corporate titans, was one of the people who teamed up to support the idea which came to be called Unusual Praise.

He had the privilege of chairing Unusual Praise in 2018 and continues to be a key driver for the initiative, which has become the biggest Catholic gospel music event in Africa. In 2018 and in recognition of his passion for building future leaders, Valentine Ozigbo was appointed to chair the allied youth-focused entrepreneurship-building programme, Unusual Entrepreneur. He is still the chairman of the programme.

The massive turnout to Unusual Praise and Val’s passion for the gospel platform made some well-meaning Ndi Anambra request that the event is held in Anambra. He and Unusual Praise’s leadership had concluded plans to hold the event in Onitsha by April 2020 before the COVID-19 pandemic struck and those plans were shelved.

What is more instructive to note is that Unusual Praise and Unusual Entrepreneurs do not discriminate based on sect in deciding on performers or beneficiaries. Such could only be the case of the leadership which Val has been among since 2018.

Val understands more than most people the importance of 4Cs. So he looks out for Character, Competence, Capacity, and Compassion when dealing with fellow humans, not unimportant factors such as ethnicity, origins, or denomination.

Growing up as a primary school pupil under his father’s tutelage, Andrew Ozigbo, in the dusty streets of Umuomaku in Orumba South Local Government Area, Valentine witnessed first-hand, the cordial and mutual relationship his parents had with neighbours of all sects.

His father was a Catechist and a school headmaster. He and Ozigbo’s mother, Christiana Ozigbo, had an open-hearted disposition to everyone who crossed their paths. Their example had a defining impact on the worldview of their youngest child, Valentine.

In the past year, Val has been a guest of most Synods of the Anglican dioceses in the state. A good number of the members of his Campaign Organization are Anglicans and Pentecostals. Val’s visible relationships with other denominations could only bolster the extent he values human virtues, which endeared them to him, regardless of their denomination.

The Anglicans have always been his friends from his early days. They have been part of his life, from his growing-up days to adulthood.  Pentecostals have also connected with him in his career years through his spiritual leaning in the Charismatic Renewal.

Indeed, they will remain his friends till his last days, and there is no position in life, even occupying Agu Awka, that can alter the core of who Val is. The famous Igbo adage, “One does not learn to be left-handed at old age,” holds in this instance. During his sojourn in the corporate world, Mr Ozigbo sat at the helm of different multinationals.

He was exceptional, not only because of his uncommon exhibition of excellence, but also because of the array of extraordinary attributes and qualities he possesses: he is detribalized and devoid of any atom of religious fanaticism or other segregating attributes.

In almost three decades, Val has cemented his status as a multi-disciplinary, multi-dimensional, and uncommonly gifted international business mogul and created a rock-solid reputation as an honourable and principled man of character, competence, capacity, and compassion.

Ndi Anambra, irrespective of their faith affiliation and residents of Anambra State, should rest assured that with Ozigbo on the saddle, all forms of segregation shall be history. The Nchawapu message is all-encompassing and cannot be dimmed by politics of denominational dichotomy.

Cosmas Anyabolu is a legal practitioner, human rights activist, and a political analyst. He writes from Nnewi, Anambra State. He can be reached on Facebook https://m.facebook.com/cosmas.anyabolu/