He Has Embarrassed Us

If there is one institution that should offer sanctuary to those vilified and rejected by their society, that institution is the Church. But when that same institution joins others to spew hate and divisiveness, then we may not doubt that the end time is nigh.

That was the case last Sunday at Holy Trinity Catholic Church, Ewu-Owa, Gberigbe in Ikorodu, Lagos, when a priest in the church, Rev Fr James Anelu, did the unthinkable. He ordered the choir to stop singing Igbo songs thenceforth and went ahead to accuse the Igbo population in the church of trying to dominate others in the same way they dominated others in his native Edo State which led to an Igbo bishop being imposed on them.

Thereafter, the congregation staged a walk out and very soon, the priest’s outburst was all over the social media. It attracted instant outrage from across the country and beyond and shortly, the Catholic Diocese of Lagos suspended the priest, pending investigations.

The prompt action of the Lagos Diocese, no doubt, went a long way in calming emotions. But to me, the shock did not just evaporate. I still find it difficult to accept that this could happen and in the Catholic Church of all churches for that matter. 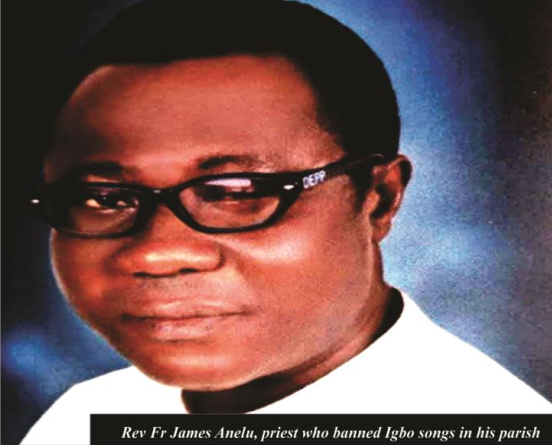 You see, when the news first broke out in some of the social media platforms I belong, I doubted it because of the sheer fantastic nature of it all. I felt maybe the priest must have been misquoted since I did not expect to hear such from my church. But eventually it turned out to be as real as daylight.

I dare say that the utterances of Fr Anelu are like a sucker punch to the Church, especially the Catholic Church. For the priest to have shown his disdain for the appointment of an Igbo bishop in his home diocese of Benin, showed that he had been harbouring that anger and hate for a long time.

His reference to the imposition of a bishop in his home diocese is also something that could sow seeds of discord there as some people may begin to see things that way.

It was therefore, a view point that could undermine the authority of the Church which can indeed appoint anyone anywhere to serve in any capacity. This is the way it has been until the shameful action of the people of Ahiara Diocese in Imo State. Fr Anelu’s reference to the imposition of a bishop on his diocese, coming after the Ahiara imbroglio, shows that such sentiments, once sown, begin to germinate and spread.

It was heartwarming that the Lagos Catholic Diocese acted very fast and suspended the priest. It was an action that very much proved that the priest was on his own and fully responsible for his utterance.

Indeed, what he did could be a big blow to the faith of many people who believed in the loving and accommodating nature of the Church. For them to see the Church as joining in what has become the national business of hate, divisiveness and ethnic profiling is something that may destroy the age-long belief in the infallibility of the Church.

This is why this priest should be given the harshest sanctions and, if possible, be never allowed to officiate Mass in any church. He can be sent to work in other capacities where his biases will not bear on his work.

But even before that, he should be made to render a public apology which, hopefully, will enjoy the same widespread circulation as his outburst. This is the last thing that the Church should condone, coming from a priest who should be preaching love and unity.

Fr Anelu’s action is a big scandal, as well as a mammoth embarrassment to the Church and the faithful and something that, if not well addressed, may sow the seed for future embarrassments. First, it was Ahiara and now it is Fr Anelu. Before such begins to look like the norm, it should be decisively dealt with so it does not rear its ugly head ever again.

I still wish I was dreaming so that when I wake up, it will be what it is: a dream. But, alas, it is as real as the reality of you reading this piece.