Have We Lost This World Forever?

In the midst of the crises bedeviling us left, right and centre, it is easy to forget that there once was a time when we lived in absolute bliss as one people; a time when brother knew brother, sister knew sister and friendships were treasured. It was a time when everyone was happy to enjoy one another’s company.

Then, a child of one family was seen as a child of all families. You could leave your child with neighbours and go out, staying as long as you liked in the knowledge that your child was in good hands. Those days were days of supreme happiness and oneness. But, alas, as days rolled into years, that paradise was gradually lost until we landed where we are today. How sad!

Today, we have eaten the forbidden fruit and our eyes have been opened to many ills, such that today, the people of Sodom and Gomorrah will cringe at some of the things we do. 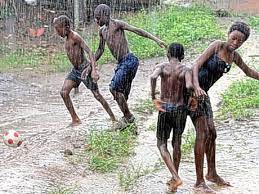 All our institutions, without exception, have collapsed and eaten by the ills of modern times. Our value system has been thrown to the dogs. It is now abnormal to be normal. Children kill their parents and sell their body parts to ritualists; parents sleep with their children and brothers even marry sisters.

Our spirit of communalism has been overtaken by the spirit of individualism, such that one could live in the same building with another and not know anything about their neighbour.

In the days of yore, it was possible for one to eat their fill outside their home and return to sleep in satiated stupor.

How did that happen? you may ask. A man would wake up, go across to his neighbour’s house, eat kola nuts, exchange pleasantries and then he would go to another man’s house. Such visits would go on until he landed in the compound of one who had just returned from wine tapping.

His visitor would then be treated to some cups of wine to wash down the food he must have eaten elsewhere. Thus, without eating any food in his house, our man would return home very satisfied and with a full stomach.

I guess not many would try this now. First will be the suspicion of being poisoned. Another will be the feeling by the host that the visitor has come to reduce his food (if there’s any). In fact, these days, who even has time to visit neighbours? Everyone has become busy, including those that are busy doing nothing.

The cry of a baby means nothing to a neighbour. One who lives alone could die and rot in their room without anyone looking for them. It is now a strange world where it is every man for himself.

There are still things I remember that were part of the old way of life. For instance, I remember how neighbours would use our compound as a short cut to their place. There were no walls. If they happened to find you eating, they did not need a second invitation to join you if they wanted to eat.

I remember how women called out to each other when it was time to either go to the stream or to the market. They liked going together and coming back together.

I remember how we as kids during holidays in the village used to wake very early during the harmattan cold and head to the stream, playing all the way to the stream. We would make many trips before it was fully daylight.

I remember how we used to play in the nights under full moons. We would play games, sing and dance, until we got tired and sleepy and then went home.

I remember the folk tales by our grandmothers after the night’s chores were done and meals taken. One by one we would fall asleep until the story teller bid everyone to go in.

I remember how we used to visit other families in the township on Sundays and how they equally visited us. Food was no problem then. No matter the number of the visiting party, the host always had enough rice to go round. For sure, there were poor people then but not where food was concerned. Food was in abundance then.

Those days, family ties were taken seriously. On days of new yam feasts or alom muo as we called it locally then, exchange of visits among relations was the order of the day.

Children were made by their parents to know their relations through visits, especially during the holidays. The children of those in the village were often invited to come spend their holidays in the homes of their relations in the townships. Those visits afforded many village brought ups the opportunity to see the township for the first time and see things they’d been hearing about but never dreamed of seeing.

I recall the reaction of one of my cousins when I took him to the stadium to watch Rangers train. It was his first time in Enugu. I loved the sheer delight in his voice and face as he marveled at the mention of each Rangers player as I pointed out each of them to him.

He kept saying, ‘So this is Christian Chukwu. So this is Okala….’

I derived a certain pride from showing him those players as I felt some superiority as a township boy. It was same way my other relations must have felt when I visited them up north and got taken to places of interest. Such was life then.

Those days, holidays were meant to form part of one’s training. It was believed that going to live briefly with others afforded you the opportunity to improve, learn new things and get prepared for your future. And those holidays really helped. If you were the lazy type in your home, it would not be tolerated in the home you were spending the holidays. After the initial warm welcome, you would start experiencing the sterner side of your hosts as days went by, such that before you returned to your parents, they would have started flogging you for misdemeanors.

It was no use complaining to your parents on your return as they knew those canes applied to your buttocks or hands must have helped to improve you.

The spirit of communal life wasn’t restricted to the villages. Where we lived at the time in Enugu, if any child happened to be in any of their friend’s house when meals were served, that child would definitely be part of it and would even be forced to eat if they refused. You know at that time, children were often warned by their mothers to refuse food in anyone’s house, not for fear of being poisoned, but as a mark of good training.

Thus, we always pretended to refuse when invited to eat, while praying that we would be ”forced” to eat. That ”force” obliterated any shame or the feeling that we were gluttons or ndi usa, as such children were called. If on refusing to eat at the first invitation and you were not ”forced” to eat, you only had yourself to blame.

So, while defying your parents’ order for you not to play, you had to also dodge being seen by any of the other parents while playing football or doing anything forbidden you by your parents. Even when your parents had not said anything, neighbours stopped you from doing anything they felt was not good.

Those days too, we were made to perform chores even if there was a maid in the house. You just had to have certain chores in the house that were yours.

For me, I used to sell bread and mineral at Ogbete Market in Enugu where my mother (bless her good soul) had a shop. I would wake early in the morning and go to the bakery, buy bread and take to her shop before going back home to prepare for school. The kids of those days never baulked at performing chores, even for neighbours.

What do we see today? Many of today’s youth are the embodiments of laziness, indiscipline and crass stupidity. They are products of a wasted generation. They are people no one can advise and any attempt to do such attracts insults from them. They believe in earning money they don’t work for. They hardly stay put in anything. They are school dropouts and business dropouts.

At the end of the day, they resort to criminality. They are above everybody and are laws unto themselves. You may not entirely blame them as the institutions that would have shaped and moulded them are all in tatters.

Everything these days is all about money and criminals are venerated by the community which gives them chieftaincy titles and elect them as president general; the Church makes them Parish Council Vice Chairmen and knights; political parties accept dubious characters because of their money; and finally the electorate vote in criminals because of what they are given, only to pay the price later by way of regrets.

Thus, today, there is no one or institution to look up to. And that is why we have lost our paradise, which, I fear, cannot be regained in this lifetime. A pity, I tell you.