Has the Spell Been Finally Broken

One of the major items in the news for days now has been the coming together of the Southern governors at a meeting in Asaba, Delta State. At that meeting, they finally took a common stand on the nation’s state of affairs. Some of the things they agreed on include:

Affirmation that the peoples of Southern Nigeria remain committed to the unity of Nigeria on the basis of justice, fairness, equity and oneness, and peaceful co-existence between and among its peoples with a focus on the attainment of shared goals for economic development and prosperity

Observation that the incursion of armed herders, criminals, and bandits into the southern part of the country has presented a severe security challenge such that citizens are not able to live their normal lives, including pursuing various productive activities, leading to a threat to food supply and general security. Consequently, the meeting resolved that open grazing of cattle be banned across Southern Nigeria 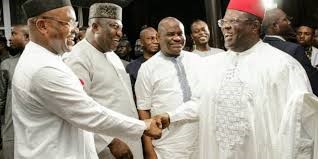 That development and population growth has put pressure on available land and increased the prospects of conflict between migrating herders and local populations in the south. Given this scenario, it becomes imperative to enforce the ban on open grazing in the south (including cattle movement to the south by foot)

Agreement that the progress of the nation requires that urgent and bold steps be taken to restructure the Nigerian Federation, leading to the evolution of state police, review of revenue allocation formula in favour of the sub-national governments, and creation of other institutions which legitimately advance their commitment to and practice of true federalism.

That in view of widespread agitations among their various peoples for greater inclusiveness in existing governance arrangements, the Federal Government should convoke a National Dialogue as a matter of urgency

Recommendation that in deference to the sensitivities of their various peoples, there is a need to review appointments into federal government agencies (including security agencies) to reflect federal character as Nigeria’s overall population is heterogeneous

Expression of concern on the continued gridlock on the Oshodi-Apapa Expressway and the chokehold it has exerted on the nation’s economy being the sole outlet from Apapa Wharf. The meeting, therefore, recommended the activation and establishment of ports in other states of the federation to create new jobs and promote socio-economic activities in the country.

Expression of concern on the economic implications of another lockdown on the country and therefore suggested greater coordination and cooperation between federal and state governments in evolving strategies for dealing with the COVID-19 pandemic.

Expression of very grave concern on the security challenges currently plaguing the nation and strongly urged that Mr. President should address Nigerians on the challenges of insecurity and restore the confidence of their people.

The coming together of these governors from the five Eastern states, six South South states, and six from the South West states, was hailed by all Nigerians who mean well for the country. The happiness of these people must have been informed by what seemed before now, years of the entire southern leadership and people being hypnotized by the ruling north. Indeed, many, me inclusive, were beginning to believe that there was a very powerful juju which the north used in casting a spell on the entire south.

Thus even when the south is reputed to have better educated people, the north always found it easy to manipulate them. They mostly did this by pitting the south against themselves such that the Yoruba, Igbo and all the minority nationalities therein, saw one another as enemies.

Even among these nationalities, the north further split them by dangling power or the carrot stick at some of their leaders as the case may be.

Among the Igbo, they divided us with money. Once money was given to a few individuals, they would happily become willing tools of destabilization among their own people, working at cross purposes with them. In the west, they dangled the power carrot stick before them which the likes of Bola Ahmed Tinubu have fallen for.

Indeed, it was because Tinubu thought he would succeed Buhari that he had gone on supporting Buhari, so much so that now that even the goats and cows know it is the turn of the Southeast, Tinubu still believes that he will be given the ticket. That lust for power is what is still keeping Tinubu blind from the stark reality that Buhari and his northern accomplices would rather give it to another person.

But away from Tinubu, the north has always seemed to take the west more seriously than the east. As long as it is only the east and other minorities that are making noise, the north won’t bother much. To them, our noise is much like the noise made by the mother hen when her chick is carried by the falcon. You could call it empty noise.

And it seems the north are right in this. When former military head of state, Ibrahim Babangida, annulled the 1993 presidential election that would have produced Moshood Abiola, a Yoruba, the west literally shut down Nigeria with their organized noise.

It was so noisy that it forced the seat of power to temporarily give power to a Yoruba man, Ernest Shonekan, after which another Yoruba, Olusegun Obasanjo, emerged from prison to become the president.

Has anyone wondered if such could have been given the Igbo if they had been so robbed? Of course not! Even if it had looked likely that the Igbo would get anything, they would have used a renegade Igbo person to scuttle it.

Now, the Southeast is clamouring to have a shot at the presidency as a matter of right; having been awaiting this moment for years during which power had been given to every other major geographical zone. But rather than hand it over to us, the north has started playing games. At one moment we will hear it will be Tinubu; at another, we will hear it is that failure of governor, Yahaya Bello of Kogi. We have heard before that it could even be former President Goodluck Jonathan.

These, I believe, are mind games being played by the north to test our resolve and to gauge the pulse of other zones. They are believing and banking on the fact that the south will never unite.

But that southern governors meeting has shaken them to the marrows. They are shocked at the possibility and implications of a united south. Just as they were mulling over that, a Yoruba group came out to declare that any attack on the east would be considered an attack on the west, just as the group vowed to work together henceforth with the east.

All this is bad news for the feudal north and they may have to rejig their strategies fast. I suspect that they could move from flying the kite to entice other zones to run for presidency, to being forced to concede the presidency to the southeast, so long as that person will be any of their Igbo lackeys whom we already suspect to be Gov Dave Umahi of Ebonyi State who recently jumped ship to become an APC member.

Just as they imposed Hope Uzodimma on Imo State as governor because they saw him as one they could use to prosecute whatever evil agenda they have for the zone, they can use Umahi who has never hidden his desire to please the presidency, even while a PDP governor.

Should someone like Umahi eventually be imposed on Nigeria as the president, it will dawn on everyone that nothing has changed. And that is why the call for the restructuring of the country by the southern governors should be sustained, especially by those genuinely calling for such.

Let’s not forget that the likes of Umahi and Uzodimma were part of that meeting in Asaba. I can imagine how uncomfortable they would have been while the meeting lasted. I can’t put it past them to be even texting Aso Rock during the meeting to report the proceedings in order to prove their innocence.

It is a good thing that on such occasions, the voice of the minority is usually swallowed up by that of the majority. Thus, even though the likes of Umahi and Uzodimma may not be happy with the new developments, they have to play along or be targets of their angry people.

The meeting of the southern governors is a welcome development and the next step is to increase the volume of their calls and make as much noise as they can, while enacting the enabling laws through their various state assemblies on some of the resolutions they raised, especially the one on the proscription of open grazing of cattle in the south.