A group, Project Ayamelum Network, PAN, and communities in Ayamelum Local Government Area last Tuesday took to the streets of Anaku to protest against transport fare extortion by the Anambra State Government.

This comes as the Managing Director of Omambala Line, Mr Evergreen Chukwuemeka Ofozoba, has accused a commissioner under the outgone Willie Obiano administration of blocking his efforts at operating inside the motor park he, Ofozoba, built because the commissioner was bent on protecting his business interests. 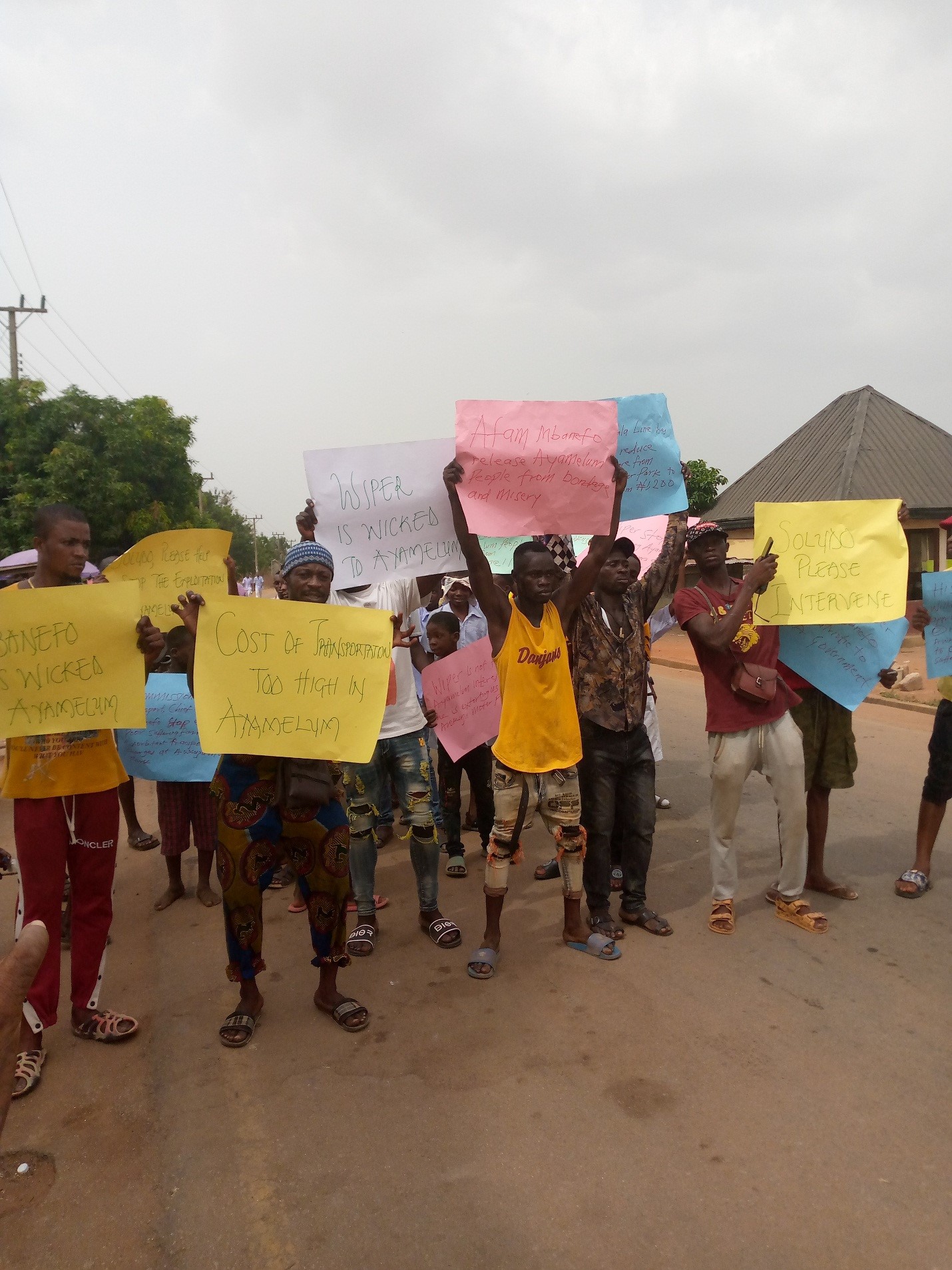 Youths of Omambala communities protesting against alleged government extortion of their communities or transport fare.

Corroborating Ofozoba, the Coordinator of PAN, Mr John Udemezue, who led the protest held in Anaku, Anambra East LGA, accused the outgone regime of Willie Obiano of causing the exorbitant transport fare from Awkuzu to Ayamelum by refusing to approve the park built by Ofozoba whose fleet charged N600 as against that by government officials at the motor park that charged between N1, 000 and N1,200 from Awkuzu to Ayamelum.

He noted that his people, being farmers, were paying too much to transport their farm produce and therefore needed affordable transport fare as provided by Omambala Line.

‘Our people pay between N1,000 and N1,200 as transport fare in Awkuzu Motor Park to Anaku, Omor and other communities down to Omasi, respectively. This motor park is managed by agents of the Anambra State Government under the supervision of the Ministry of Transport headed by Chief Afam Mbanefo as the commissioner. The situation is usually worse during fuel scarcity as the far will double and even triple sometimes. The distance between Awkuzu Motor Park and Anaku is less than 30 kilometres, and to Omasi, 40 kilometres.

‘When we succeed in bringing our produce to markets in the cities we realize that higher percentage of money made from sale of the produce normally goes into transportation charges,’ Udemezue complained.

‘We understand that N5 million is being generated from Awkuzu Park on daily basis. Can the Commissioner for Transport and his collaborators account for this huge sum of money?’ Udemezue queried.

He therefore appealed to the new government of Gov Chukwuma Soludo to intervene, as, according to him, their patience was exhausted.

For his part, the MD of Omambala Line, Mr Ofozoba, lamented that since February last year that he completed the motor parkin Awkuzu that he was asked to construct, approval was yet to be given to him to operate in that park, despite his resolve to charge only N600 as against the government’s N1,000 and N1,200.

He recalled how the presidents general and traditional rulers in the Omambala Zone had tried to intervene by reaching out to the government but got no positive action.

‘I’m surprised because what I wanted to do will be for the benefit of the people of Ayamelum, but because it affects the business interest of one powerful man from Oyi, approval has not been given. They don’t want anyone to break their monopoly,’ Ofozoba said, while also appealing to Gov Soludo to rectify the matter.

When Fides sought the reaction of the then Commissioner of Transport, Chief Afam Mbanefo, he said any matter that involved a protest which was a security threat would delay action, even as he denied having any business interest in the matter. He also said issues arising from the case were contained in his hand over note to the new administration