The Managing Director and Chief Executive Officer, Anambra State Road Traffic Management Agency (ARTMA), Mr Pat Chiezugo Obiefuna, has been honoured with an Excellence Service Award for his giant strides in the Agency.

Presenting the award to Mr. Obiefuna in his office at Agu Awka, ARTMA headquarters, the Pageant Director of Most Pretty Queen Nigeria, Miss Queen Stephen, commended him for justifying his appointment as the MD/CEO of ARTMA. 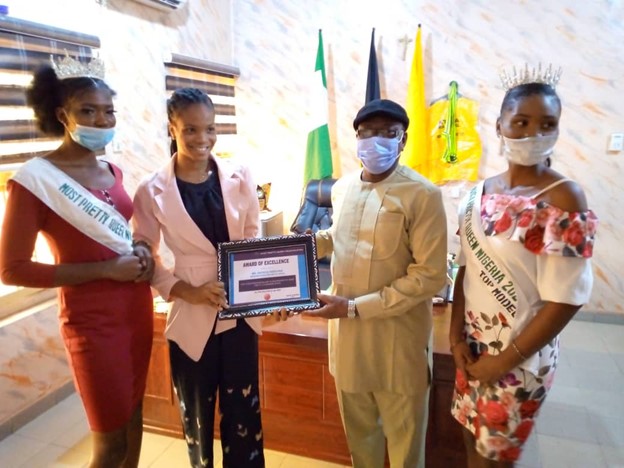 ARTMA Boss, Mr. Obiefuna, 2nd from right, receiving the award from Queen Stephen and her team

Miss Queen Stephen described Obiefuna as a hard-working man, even as she nicknamed him, “Mr fix it”, stating that Mr. Obiefuna had transformed ARTMA for good and had also made traffic situation in Anambra State very easy and free, especially in Onitsha, adding that they passed through Onitsha and were impressed with the traffic management system put in place by the ARTMA boss.

Queen Stephen described the traffic situation in Onitsha before now as a huge challenge and unbearable but that with the coming on board of Mr Obiefuna in the helm of affairs at the Agency, the traffic in Onitsha was now under control and encouraging.

Responding, Mr. Obiefuna thanked Queen Stephen and her team for finding him worthy of the award, noting that the recognition would spur him on to do more.

Presentation of award, exchange of pleasantries and talks, formed the highpoints of the occasion.