It was all smiles for more than 100 old men and women in Nimo in Njikoka Local Government Area of Anambra State, recently when they received free medical treatment from an outreach programme of a South-East charity group, Likeminds Progressives Forum of Nigeria (LPFN).

The group visited the community with six medical doctors and other medical personnel to attend to the health needs of the people, especially the aged. 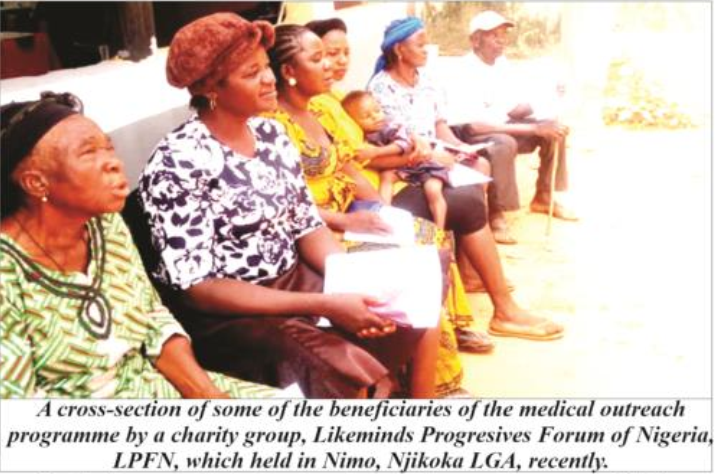 Some of the medical conditions discovered during the outreach, according to the leader of the medical team, Dr Joseph Ugwu, were hypertension, malaria, diabetes and eye problems.

He said the diagnoses were conducted for different ailments, adding that their initial target was 100 patients, but when they got to the place, the number rose geometrically.

A key member of LPFN on the mission, Ikem iliobi, said the exercise had become an annual event for them for the past 20 years.

He said every year the group made sure that 60 percent of their contributions were channeled to charity work.

‘We’ve done many projects in the last 20 years, including visiting different hospitals to save lives. This year we decided to come to Nimo to give medical attention to the indigent, widows and others, and by the grace of God, we plan to take it to other parts of the South-East states soon,’ he said.

The chairman of the Medical Outreach Committee, Hon Chuks Obiweluozor, said their concentration was not only for the less privileged, but for all that subscribed to treatment by consent.

Speaking, the President General of Nimo Community, Chief Okafor Omabu, praised the group and the medical team for coming to his community to save lives.