Anambra State might just have begun a marathon march to a higher plane of civilization. On the 17th of March, 2022, the globally acclaimed economics scholar and technocrat, Professor Chukwuma Charles Soludo, and Dr. Onyeka Ibezim took the Oath of Office and were respectively sworn in as democratically elected Governor and Deputy Governor of the state. 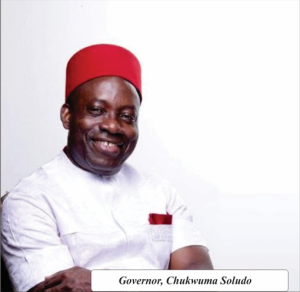 The significantly low-key inauguration, on Soludo’s considered advice, marked an early sign of the administration’s frugality in the use of state resources in pursuit of its dream “livable and prosperous smart megacity homeland envisioned to be the preferred destination for indigenes and other purposeful persons to live, learn, invest, work, relax and enjoy”.

Observing the administration journey about four months on a 4year course, one can risk concluding that though the terrain appears rough, the new sheriff in town is determined to shepherd the affairs of state to safety. The aggregate potentials and possibilities in human and material forms in Anambra, capped with Gov. Soludo’s resolve, give impetus to the target ascent.

So far, Mr. Governor (as Soludo would just wish to be addressed) has maintained a deafening level of consistency in walking his talk on his novel functional “disruptive change” mantra, impressed only by the doctrines of maximum public good and prudent use of public fund.

He would – while strategizing for more effective and sustainable ways of confronting the worrisome insecurity, poor state of roads, poor waste control, embarrassing touting across the state, etc. –  insist on only palliative interventions with acceptable performance quotient.

Soludo’s insistence on conservatory response to the multi-sectoral needs of the state soon began to gnaw at the palpable goodwill that visited his electoral victory. A good number of Ndi-Anambra expected that the governor’s vast global experiences in grooming corporate economies guaranteed an immediate one should off systemic turnaround of the state’s fortune. Soludo would offer no spasmodic plunge into the demands.

In less than three months however, the people began to feel the soothing effects of their governor’s painstakingness in taking decisions: the insecurity that robbed Anambra of its “safest state” status some while before Soludo’s time, began to be tamed by the deployment of strategic schemes in combating the menace.

A joint task force went after the adamant criminals (Unknown gunmen) in the jungles and streets of the state, while repentant persons in the criminals’ fold were offered amnesty, entrepreneurial training and startup opportunities. Since the operation began, insecurity in the state has been on steady decline.

The governor’s strategic visit to Nnamdi Kanu, the leader of the Independent People of Biafra (IPOB) in prison lent a hand in unmasking the group causing mayhem in the state. Kanu unreservedly condemned the wanton criminality in the South East, which included the wasteful Monday sit-at-home and the savage acts of abductions and killings in the name of IPOB.

The “unknown gunmen” phenomenon got demystified, and the vicious criminals bent on ruining the state’s economy lost any possible claim to any form of agitation. This justifies Soludo’s resolve to reclaim the state from the stranglehold of the criminals by taking them out through armed security operations.

In a bid to making Anambra livable, the government banned touting by persons who harass and extort money from people. A digitised mode of payment to government to avoid leakages has been put in place as remedy to the menace of touts.

In less than 24 hours after his inauguration, Gov. Soludo confronted the hill-size refuse dumps that for long constituted environmental and health hazard to residents of Okpoko and other parts of Onitsha Urban Communities. That act was precursory to the expansive urban regeneration exercise now going on around Onitsha axis.

Soludo’s avowals to champion the marketing of Anambra brand is made true by his choice of Innoson Motors as his official vehicles, and his preferences for made in Anambra shoes and Akwete textile made somewhere in the South East. 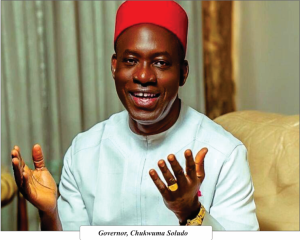 The gap the administration identified in the size of the state teaching force received commensurate response in the governor’s instruction for recruitment of over 5000 primary and secondary school teachers. The same instruction was given to the Ministry of Health where he ordered the employment of doctors, nurses, pharmacists and laboratory staff to make government hospitals function effectively. The recruitment exercises are in advanced levels of completion by the ministries involved.

To ensure appropriate drug storage and distribution in the state and the South East, the SoludoAdministration, partnering with Sterling Bank, has done the groundbreaking ceremony for the building of an ultramodern International Drug Market at Oba.

The project which will be delivered in 24 months will lead to the relocation of the Bridge Head Drug Market to enable the Government redesign the area for more beneficial use. The administration has launched new facilities and medical equipment at General Hospitals in Onitsha, Enugwu-Ukwu, Umueri, Agulu and Ekwulobia.

Soludo declared emergency on roads, embarking on serviceable repairs during the rains, while ready for expansive road rehabilitation and construction across the length and breadth of the state as soon as the rains recede.

To facilitate free traffic flow to and from Enugu through the old Amansea federal road, the washed off stretch of the road in Amansea section has been reconstructed using technical expertise of the Anambra State Ministry of works at a highly cost-effective rate. Some other such interventions are found in Upper Iweka, Onitsha and along Onitsha-Owerri Road.

The administration has embarked on redesigning and designing of some old and new roads so as to provide free traffic and provide pedestrians safe walk corridors in busy cities. It is not surprising therefore that road and infrastructural development account for 64% of the fund in the administration’s 2022 Revised Budget of N170bn.

Notably, the administration has continued to make remarkable successes in reconciling people and communities hitherto engrossed in intra-communal and inter-communal crises over leadership tussles and boundary matters. This feat expands the frontiers of peace needed for the growth of the state.

As a way of cushioning the effect of failing global petroleum economy, the SoludoGovernment is reinventing the Oil Palm economy. It is also introducing Coconut economy. This scheme supplies an average of one million seedlings each of Oil Palm and Coconut annually to farmers across the state.

In the Culture and Tourism Sector, Agulu Lake and its environs, as well as Ogbunike Cave have been marked for uplift to make them meet international tourism standard; the administration has also concluded arrangements to internationalize notable cultural festivals in the state by enriching them and putting them in the global cultural/tourism map.

The administration not only promptly pays gratuities to retiring workers, it is also gradually servicing the huge backlog of unpaid gratuities.

While most of what the administration has done in its four months might not be adequately quantified, their aggregate essence converges in founding an administration whose determination to serve the people can only be better assessed deep into its 4year tenure.

In all these, Professor Chukwuma Soludo’s adept experience in managing human and material resources for societal good is incontrovertible. For this, Ndi-Anambra continue to celebrate the victory they collectively earned in his emergence as their governor.