Gov.Soludo Declares Criminality and Idolatry Will Not Prevail In Anambra

The Governor of Anambra State, Prof Chukwuma Charles Soludo has made a firm declaration to Ndị Anambra that criminality and idolatry will not prevail in the state. He went on to state that Anambra  is a Christian State and that with firm belief in God (as seen visibly with our carrying the bible in our right hand) coupled with concrete commitment by all critical stakeholders,  the state will overcome it’s near death situation at the moment.

The Governor made this remark at St Patrick’s Catholic Parish, Isuofia on Friday, July 22,2022 during the funeral and burial Mass held in honour of Hon. Okechukwu Isaac Okoye (Okay Di Okay) the slain member representing Aguata 2 at the State House of Assembly, Awka.

The Governor who was visibly emotional, commiserated with the late Okoye family,Ozalla Village Isuofia, Isuofia Town in general, St Patrick’s Parish Community, Isuofia and the entire good people of the State over what he described as a dastardly and deadly act devoid of any form of humanity and conscience while assuring the public that all the culprits who are involved in the heinous crime in any form will not go unpunished.

Recall that Hon Okay Di Okay was abuducted two months ago together with his Personal Assistant, Mr Cyril Chiegboka along Umuona – Oraeri Road by some hoodlums and were both later beheaded after a week in captivity even after paying huge sum amount of money as ransom.

The Governor who disclosed that the late Hon. Okoye was his adopted political son noted that efforts are currently underway to unravel the genesis and dramatis personae involved in the crime with a Seven Page preliminary security report on the investigations at his table at the moment. 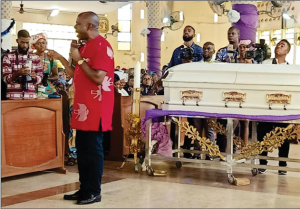 While assuring the readiness of Anambra State Government to provide a crime free society and livable environmen, he tasked all communities in the the state to urgently embark on public cleansing where everyone will swear to an oath of good conduct and care for the other and public good. He spoke on the need for all families, kindreds,villages, communities,towns,Market Men and Women, Associations and the like to do a soul/self search,look inwards and fish out all criminal elements among them for by so doing, communities will be safer and habitable.

He made it clear that there’s nothing like Unknown Gun Men because there are people who know them but decided to keep silent while crimes continue to fester around. The Governor went on to say that the perpetrators of criminality in our midst are beasts in human body who knows what they are doing which has nothing to do with any form of agitation whatsoever.

He stated that they are not christians but are worshippers of a strange god who delights in blood sucking,a way of worship, alien to Christianity. He announced that over fifty shrines of these hoodlums scattered around the state has been destroyed in the last two months and vowed to rid the state of this devilish elements.

He promised to get all payments and emoluments accruing to the deceased member of House of Assembly to the family. While stating that there will be a bye-election to fill the vacuum left by the demise of the lawmaker He directed the family or the village to put in a replacement who will complete his tenure in the House of Assembly which was received with a wild round of jubilant applause.

Earlier delivering a homily during the burial Mass, the Bishop of Ekwulobia Diocese, His Eminence Peter Ebere Cardinal Okpaleke prayed God to accept the soul of the late Hon Okay Okoye and grant him eternal repose in heaven. He equally beseeched God for  protection on the family he left behind as well as friends and well-wishers who are hurting terribly at the moment.

He noted that the deceased while alive was a good man with lots of aspirations and vision but who regrettably has fallen to the cold hands of death in this most shocking manner. He called on all christians to always live good lives on earth while we await our Divine appointed time to exit the world.

He urged the family he left behind to keep to their faith in God just like the deceased who remained faithful till death. While praying that the late member representing Aguata 2 constituency at the House of Assembly in the State rests in perfect peace,he equally prayed that God give the perpetrators of the crime the Grace of repentance.

In his thank you speech during the ceremony,a member of the family, Mr Emmanuel Okoye expressed his gratitude to the Diocesan Bishop,priests and religious,state  government officials, members of the State House of Assembly,lay faithful and all who made great sacrifices in being with them at’  this great moment of sorrow to pray with them and condole them on the death of their brother and son’ while wishing them safe journey as they go back to their various destinations.’