Good Traffic Management in Yuletide Kudos to FRSC, Others

When in December last year, the Anambra State Sector Commander of the Federal Road Safety Corps, FRSC, Mr Adeoye Irelewuyi, addressed the press and assured of the resolve of his command to ensure free traffic flow during the yuletide, his assurance might have been taken with a pinch of salt in some quarters, given the failure of such assurances in the past. He had also announced the decision of his command to patch up some bad portions of road in strategic parts of the capital city.

We are happy to observe that the assurances were met as checks across the state revealed that though there were huge volumes of traffic everywhere, the officials of the FRSC or community workers were around to control traffic, thereby saving the road users the usual traffic gridlock that usually takes hours to circumvent.

We commend men of the Anambra State Command of the FRSC for their gallant and untiring effort this period and hope that this will not be the end of such gallantry.

In particular, we wish to commend some communities which mobilize and trained their people to help control traffic. Of particular mention is the Enugwu-Ukwu Community which has now been known to do so every yuletide. We commend them for their sacrifice and urge other communities to emulate them so that the ugly experience of road users in festive periods will become a thing of the past. 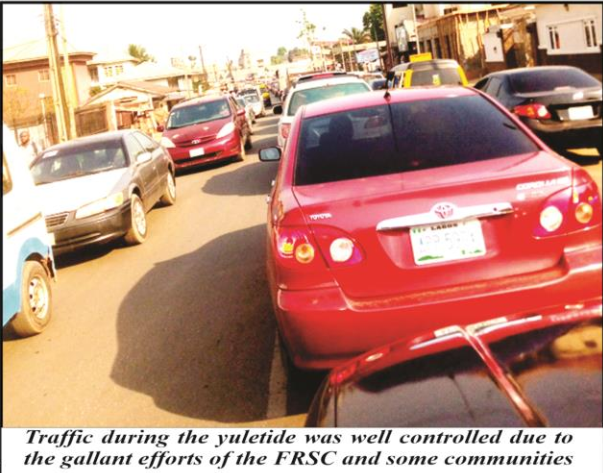 We however regret that many people are still bent on frustrating the efforts of traffic controllers by their lack of discipline which sees them forming double lines at the slightest opportunity and thus causing unnecessary gridlock.

It is also the bad attitude of some road users that caused some of the accidents that happened within the period. It is saddening that despite all the enlightenment campaigns of the FRSC, many drivers still drive recklessly. A case in point was the accident on Agulu Lake Bridge that wasted eleven lives just because the driver of a commercial bus tried to overtake on the bridge and ran into an articulated vehicle. Their vehicles caught fire and eleven passengers were burnt beyond recognition.

We urge the FRSC and sister agencies not to relent on their enlightenment efforts in the new year. But we also urge for stricter sanctions against road traffic offenders which will serve as a huge deterrent to others.

The need for sanity on our roads is paramount.

Once more we congratulate the FRSC and others who helped to ease the traffic problems during the yuletide.