Recently a well dressed young man in English suit suddenly stopped his SUV at the middle of the busy Douglas Road in Owerri, Imo State of Nigeria. He hurriedly stepped down from his luxurious jeep with the driver’s door carelessly left open.

He raised his two hands up and then rested them over his head for a while. He turned acrobatically round for a number of times. Then he walked forward briskly and disorderly, shouting on top of his voice, “Give me my share! Where is my share?” He began to walk in a zigzag way along the busy Market Road, not minding the heavy vehicular movement.

Next, he sat down at the middle of the road, shouting the same thing. Then he stood up, removed his shoes and green suit and threw them away. He ran up and down shouting, “Give me my share! Where is my share?” It became obvious that he had run mad when there was no one he was particularly talking to.

When the madness entered his medulla oblongata, he removed his white long sleeve shirt and threw it away. Being half naked he started to harass passersby and motorists asking them, “Where is my share?” When he loosed his trouser belt, it became clear that his sudden mental derangement was reaching its climax. 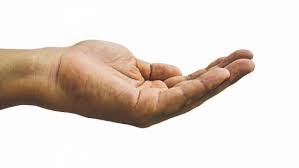 He would have removed his trouser and pant entirely, but something from within prevented him. Even he would have been crushed by speedy vehicle if not that the drivers were evading him. By God’s intervention three men of the Road Safety Commission appeared and held him tight. He continued shouting repeatedly, “Give me my share! Where is my share?” They took him to an unknown destination.

Eye-witnesses and those who heard about the unfortunate incidence are curious to know the fate of the sudden mentally deranged young man. What happened to the luxurious jeep he left on the road? Was the young man taken to a psychiatric hospital or to local herbalist? Has he regained his lost senses?
What was the cause of his instant madness?
Has his family been contacted? Had he any dispute with anyone on business transaction? Who was the person he was asking to give him his share?

What share was he demanding for? Was the young man involved in any diabolical contract? Was he duped or under a spell? In fact I am tensed up. I wish I can get someone to supply answers to the above questions. A handsome reward awaits the person. Please I am waiting anxiously before I run mad myself.

I still recall what transpired two years ago in Lagos. It was about the fate of a late medical doctor whose name was Dr. Allwell. He was on his way to Victoria Island for the meeting of the Lagos Medical Association. He suddenly asked his driver to stop at the Third Mainland Bridge for him to ease himself.

I did wonder how a gentle medical doctor could just urinate beside the bridge like a street urchin. Instead of urinating, the promising young doctor of 35 years old plunged himself headlong into the Lagos Lagoon and got drowned. His suicidal action was contradictory to his name Allwell. Indeed all was not well with him.

Now let me go back to land. Some people are even speculating that the mad young man might have obtained his wealth through diabolical means. Perhaps he might have been involved in human sacrifice such that the blood of the innocent was hunting him.

Herod the tetrarch who killed about 14,000 innocent male kids in the place of the newly born King Jesus Christ was later eaten alive by worms. No one accepts precious gift from the devil and goes scot free. It is a question of bring head and then sacrifice your own head. On the other hand, the sudden young mad man might be a victim of circumstance.

He could be innocent but was being tormented by evil men and women in our society today. He could have been deprived of the means of his livelihood or was a victim of scammers. The inordinate desire to get rich over night has terminated the lives of many men and women. Only God who sees in secret really knows what actually transpired.

When I began writing on this topic, something strange happened to me. It was an unconscious mental infection.  After a sumptuous supper, I went to bed without saying my night prayer. Therein, I had a bad dream. In the dream, I was duped by a strange person. I felt so bad about it.

I overheard myself shouting in the dream, “Give me my share!” Instantly, I woke up and jumped down from the bed. I made the Sign of the Cross seven times and shouted, “God forbid!” Then I knelt down and started the prayer of binding and casting. I ended with the reading of Psalm 23 and recitation of the Rosary.

At this juncture, let us enter into moment of sober reflection as we are just fresh from Christmas and New Year celebrations. Did we give the less privileged among us their shares? Did we feed the hungry and give drink to the thirsty? Did we clothe the naked? Those numerous clothes in your wardrobe, boxes and Ghana-must-go bags are not all your own. Kindly give the naked their own share before they hunt you.

Did we visit the sick at various homes and in the hospital during the Yuletide? What of prisoners? You or I may be there by chance one day. Have you paid your debts? Have you made restitution for the illegal wealth you accumulated through foul means? Have you acquired any land or property unjustly? Did you deprive widows and widowers their right?

Have you paid for the items you bought at church bazaar over the years? A certain man willfully bought so many things at church bazaar auction sale without the intention of paying for them. After one year, the Parish Priest and members of the Bazaar Committee of the church went on debt drive to his house. He sternly warned them to get out of his house, because he owed no one but God.

They insisted that he must pay for those things there and then before they step out of his house. He angrily asked them to wait for him. He rushed inside his room and came out with sharp machete. Since life has no duplicate, the priest and the bazaar committee members ran away.

God looked down from heaven and was sad. After one week, the man in question died in his sleep. In few seconds he stood before the judgment seat of God to give account of his earthly life. God asked him, “Mr. Man, where is your machete? I am sentencing you to hell because of your wickedness and huge debt to the church and to other people. Depart from me!”

He began to shed tears and to ask for a second chance to go back to the world and pay his debts. The devil came out and told him, “It is too late. Come into hell and receive your share of eternal punishment.”

If you owe the church or anyone else, hurry now and settle your debts before it is too late! If you are withholding the shares of others, give them their shares now. An invisible force may hunt you along the road one day. The house you forcibly built on someone’s land will one day collapse.

The car you stole or snatched from someone may one day crush you to death. In a word, if you are in possession of anything that does not belong to you, hurry now and make restitution before the hammer strikes from above. If you have cheated others, give them their shares now.

If you have wronged anyone, go and apologize immediately. Nemesis may be on its way to hunt you. Justice is no respecter of anyone, no matter how highly placed. Nemesis can begin from the sanctuary down to the pews to hunt for miscreants.

There is no difficulty in giving a cup of water to a monkey. The herculean task lies in getting back the cup. Borrowing is easier than repaying. Hence, an Igbo adage says, “O bughi onu e ji biri aku ka e ji akwu ya.” Some people are professional debtors. They borrow from you and promise to repay as soon as possible. I could still recall how I lent a substantial sum of money to a respected gentleman.

He gave the time when he would repay me. The time came and went by. After several months of the time expiration, I went to him and reminded him of the huge debt. Instead of pleading for more time, he became annoyed with me. He asked me never to ask for the refund again lest I would regret it.  My conclusion was that he has sold his conscience.

Therefore I went away with the speculation that he might send assassins after me. From that day I swore not to lend money to anyone again. Instead, I resolved to offer any little amount I can easily forgo. This year 2021 is a year of giving others their shares.  Avarice holds most of Nigerian leaders to ransom. With the divine power invested on me, I command our leaders at the state and national levels to give their subjects their share of democracy dividends.