Get Your PVC, Vote Wisely, Bishop Ezeoka for Urges Nigerians

Following the call for Continuous Voter Registration, CVR, the Catholic Bishop of Awka Diocese, His Lordship Most Reverend Paulinus Ezeokafor, has called on every adult who has not registered to do so and get their PVC as part of citizens’ civic duties.

Bishop Ezeokafor who made the call last Monday during his sermon at a service to commemorate the World Sickle Cell Day at Madonna Catholic Church, Agulu, said for Nigerians to achieve their aim of enthroning a better and working government, they must come out en masse on election day with their PVCs and vote massively for a candidate who would bring about the desired change.

‘We must get registered and then come out and vote. We have credible candidates we can all rally round and support. You have seen how PDP and APC chose their candidates. They have no plans for the people of Southeastern Nigeria. Nigerians will speak through their voters’ cards at the appropriate time.

‘We now have an option and we must queue behind that option. Nigerians are yearning for a real change and that change has come. Let’s vote rightly and wisely too,’ Bishop Ezeokafor said. 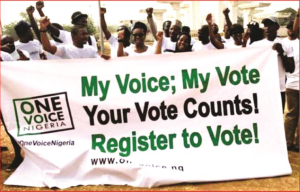 The prelate asked Nigerians, irrespective of state of origin or religion, to look inwards and consider the future of the country before casting their votes for the next president of Nigeria in 2023.

Speaking on the topic, “Solemnity of the Body and Blood of Christ”, the cleric reminded Catholics about the fruits of the communion in their lives and urged them to remain close to Christ in the Eucharist for their spiritual health and abundance of divine grace.

Harping on sickle cell anaemia, the bishop called on those desirous of getting married to check their genotype status and avoid begetting children that would suffer the consequences of their negligence.

The coordinator of the Association of Persons Living with Sickle Cell Disorder (APLSCD), Mrs Aisha Maureen Edwards, thanked everybody that honoured the event, particularly, Bishop Ezeokafor, for remaining a true father to people living with the cell; even as she thanked all those who had been of assistance to the association.

She also thanked the presidential candidate of Labour Party, Mr Peter Obi, for what she described as his paternal care and concern, noting that presently, 16 sickle cell children were living and getting education comfortably in the dormitory named after Obi because of his benevolence in ensuring that the orphans are well accommodated.

She revealed how the last support of 2 million Naira they received from Mr. Obi helped them to renew their accommodation.

Speaking to reflect the theme of this year’s sickle cell celebration, ”Harnessing Media Strength to Promote Effective Sickle Cell Awareness”, Prof. Chinyere Okunna, who with Mr. Valentine Obienyem, represented Mr. Obi, thanked the bishop for what she described as his wonderful sermon and called on all media houses to propagate the essentials of his message – the need for genotype test before marriage.

Prof Okunna thanked Mrs Edwards for her consistency and encouraged her to remain steadfast.

The Special Guest and the Chief of Staff to Governor Charles Soludo, Mr. Ernest Ezeajughi, assured of his continued support to the association and called on all men of good will to also support them.

Speaking to the press after the event, the chairman of the Nigeria Union of Journalists, Anambra State Chapter, Dr. Odogwu Emeka Odogwu, assured that the press in the state would continue to assist the association in all possible ways.