Get Comfortable Being Uncomfortable

I’m a professional troublemaker. As my job is to critique the world, the shoddy systems and the people who refuse to do better, as a writer, as a speaker, as a shady Nigerian. I feel like my purpose is to be this cat.

I am the person who is looking at other people, like, “I need you to fix it.” That is me. I want us to leave this world better than we found it. And how I choose to effect change is by speaking up, by being the first and by being the domino. 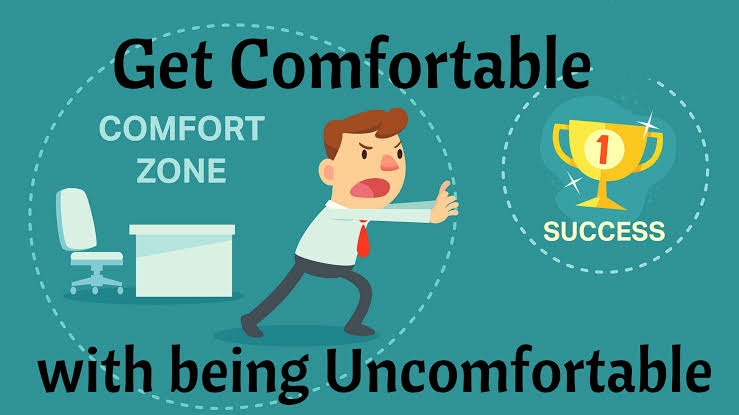 For a line of dominoes to fall, one has to fall first, which then leaves the other choiceless to do the same. And that domino that falls, we’re hoping that, OK, the next person that sees this is inspired to be a domino. Being the domino, for me, looks like speaking up and doing the things that are really difficult, especially when they are needed, with the hope that others will follow suit.

Now, let’s talk about fear. I knew exactly what I wanted to be when I grew up. I was like, “I’m going to be a doctor!” Doctor Luvvie was the dream. I was Doc McStuffins before it was a thing.

And I remember when I went to college, my freshman year, I had to take Chemistry 101 for my premed major. I got the first and last D of my academic career.

So I went to my advisor, and I was like, “OK, let’s drop the premed, because this doctor thing is not going to work, because I don’t even like hospitals. ”

“Let’s just consider that done for.” And that same semester, I started blogging. That was 2003. So as that one dream was ending, another was beginning. And then what was a cute hobby became my full-time job when I lost my marketing job in 2010. But it still took me two more years to say, “I’m a writer.”

So it took me that long to own this thing that was what my purpose was. And then I realized, fear has a very concrete power of keeping us from doing and saying the things that are our purpose. And I was like, “You know what? I’m not going to let fear rule my life. I’m not going to let fear dictate what I do.” And then all of these awesome things started happening, and dominoes started to fall.

So when I realized that, I was like, “OK, 2015, I turned 30, it’s going to be my year of ‘Do it anyway.’ Anything that scares me, I’m going to actively pursue it.” So, I’m a Capricorn. I like my feet solidly on the ground. I decided to take my first-ever solo vacation, and it was out of the country to the Dominican Republic. So on my birthday, what did I do? I went ziplining through the forests of Punta Cana. And for some odd reason, I had on business casual. Don’t ask why.

And I had an incredible time. Also, I don’t like being submerged in water. I like to be, again, on solid ground. So I went to Mexico and swam with dolphins underwater. And then the cool thing that I did also that year that was my mountain was I wrote my book, “I’m Judging You: The Do-Better Manual,” And I had to own –that whole writing thing now, right? Yes. But the very anti-me thing that I did that year that scared the crap out of me — I went skydiving. We’re about to fall out of the plane. I was like, “I’ve done some stupid things in life. This is one of them.”

And then we come falling down to Earth, and I literally lose my breath as I see Earth, and I was like, “I just fell out of a perfectly good plane on purpose.”

“What is wrong with me?!” But then I looked down at the beauty, and I was like, “This is the best thing I could have done. This was an amazing decision.” And I think about the times when I have to speak truth. It feels like I am falling out of that plane. It feels like that moment when I’m at the edge of the plane, and I’m like, “You shouldn’t do this,” but then I do it anyway, because I realize I have to. Sitting at the edge of that plane and kind of staying on that plane is comfort to me. And I feel like every day that I’m speaking truth against institutions and people who are bigger than me and just forces that are more powerful than me, I feel like I’m falling out of that plane. But I realize comfort is overrated. Because being quiet is comfortable. Keeping things the way they’ve been is comfortable. And all comfort has done is maintain the status quo. So we’ve got to get comfortable with being uncomfortable by speaking these hard truths when they’re necessary.

And for me, though, I realize that I have to speak these truths, because honesty is so important to me. My integrity is something I hold dear.  I don’t think justice should be an option. We should always have justice. Also, I believe in shea butter as a core value, and I think the world would be better if we were more moisturized. But besides that, with these as my core values, I have to speak the truth. I have no other choice in the matter.

But people like me, the professional troublemakers, should not be the only ones who are committed to being these dominoes who are always falling out of planes or being the first one to take this hit. People are so afraid of these acute consequences, not realizing that there are many times when we walk in rooms and we are some of the most powerful people in those rooms — we might be the second-most powerful, third-most powerful. And I firmly believe that our job in those times is to disrupt what is happening. And then if we’re not the most powerful, if two more of us band together, it makes us powerful. It’s like cosigning the woman in the meeting, you know, the woman who can’t seem to get her word out, or just making sure that other person who can’t make a point is being heard. Our job is to make sure they have room for that. Everyone’s well-being is community business. If we made that a point, we’d understand that, for the times when we need help, we wouldn’t have to look around so hard if we made sure we were somebody else’s help.

And there are times when I feel like I have taken very public tumbles and falls, like the time when I was asked to speak at a conference, and they wanted me to pay my way there. And then I did some research and found out the white men who spoke there got compensated and got their travel paid for. The white women who spoke there got their travel paid for. The black women who spoke there were expected to actually pay to speak there. And I was like, “What do I do?” And I knew that if I spoke up about this publicly, I could face financial loss. But then I also understood that my silence serves no one. So I fearfully spoke up about it publicly, and other women started coming out to talk about, “I, too, have faced this type of pay inequality.” And it started a conversation about discriminatory pay practices that this conference was participating in.

I felt like I was the domino the time I read a disturbing memoir by a public figure and wrote a piece about it. I knew this person was more powerful than me and could impact my career, but I was like, “I’ve got to do this. I’ve got to sit at the edge of this plane,” maybe for two hours. And I did. And I pressed “Publish,” and I ran away.

And I came back to a viral post and people being like, “Oh my God, I’m so glad somebody finally said this.” And it started a conversation about mental health and self-care, and I was like, “OK. Alright. This thing that I’m doing, I guess, alright, it’s doing something.”

And then so many people have been the domino when they talk about how they’ve been assaulted by powerful men. And it’s made millions of women join in and say, “Me Too.” So, a shout-out to Tarana Burke for igniting that movement.

People and systems count on our silence to keep us exactly where we are. Now, being the domino sometimes comes down to being exactly who you are. So, I’ve been a shady somebody since I was three.

When it’s time to say these hard things, I ask myself three things. One: Did you mean it? Two: Can you defend it? Three: Did you say it with love? If the answer is yes to all three, I say it and let the chips fall. That’s important. That checkpoint with myself always tells me, “Yes, you’re supposed to do this.” Telling the truth — telling thoughtful truths — should not be a revolutionary act. Speaking truths to power should not be sacrificial, but they are. But I think if more of us chose to do this for the greater good, we’d be in better spaces than we are right now.

By Luvvie Ajayi Jones. She is a two – time New York Times Best selling author, podcast host and sought after speaker who thrives at the intersection of humor, media and justice. The above piece is a transcript of her talk on TEDx.