The Catholic of Awka Diocese last Thursday, October 7, received a total of 572 textbooks from a Munich, Germany-based indigene of Nawgu, Dr Augustine Okeke-Agbaga, as part of his contributions to the development of education in his home diocese and state.

Receiving the textbooks at Fides Media Ltd, Nodu, Okpuno, the Catholic Bishop of Awka Diocese, Most Rev Paulinus Ezeokafor, thanked the donor for his think home philosophy which he described as very encouraging.

Bishop Ezeokafor, who said he was pleased to be part of the event, commended the donor for contributing to the development of the young ones with the donation. 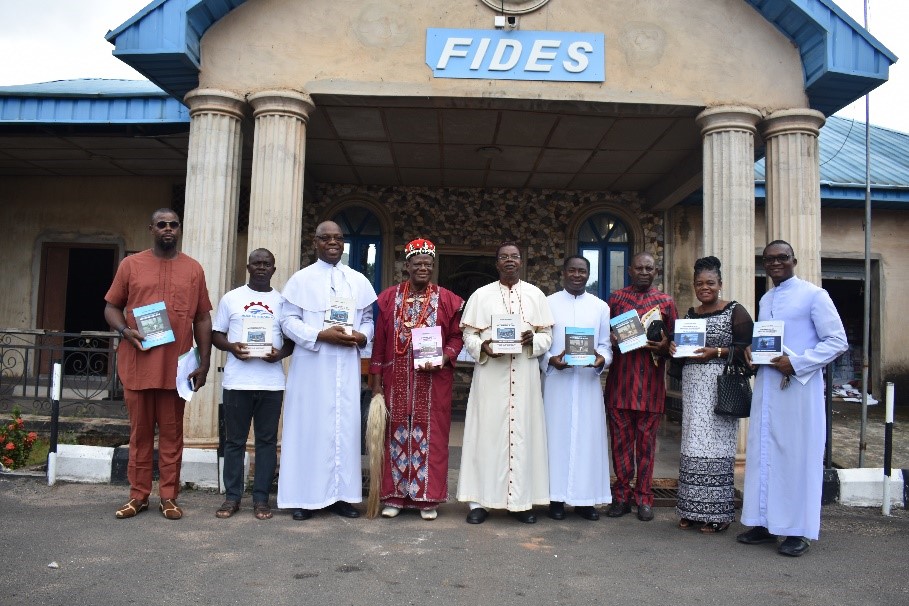 Pointing out that giving did not mean that the giver had much, Bishop Ezeokafor said it instead depicted goodwill and generosity  ; even as he prayed for more of such donations from others to ensure quality education of the young ones, who, he said, were the future hope of society.

The Catholic prelate who was accompanied by the Education Secretary of Awka Diocese, Rev Fr Maximus Okonkwo, stated his conviction that the donations would go a long way in the educational development of the young ones whom the books were made for.

The books which were authored and financed by Augustine Okeke-Agbaga, were published by Fides Media Ltd, Okpuno.

Presenting the books, the Director of Fides Media Ltd, Rev Fr Martin Anusi, commended the author for his choice of the core subjects of the English Language and Mathematics, as well as the pictorial representation on the cover of the textbooks, which, he said, were very informing.

Earlier when he handed over the textbooks to Bishop Ezeokafor on behalf of the author, the traditional ruler of Nawgu, Igwe George Okaa-Onwuogu, KSM, Orachili of Nawgu, noted that the donations were a step further in the support which the donor gave to education at the grassroots.

He described Dr Okeke-Agbaga as a patriotic indigene of Nawgu, whose concern had been how to better his community.

Igwe Okaa-Onwuogu, who recalled how Nawgu Town suffered setbacks in past years, said the town had in the last six years when he became the traditional ruler, recorded some developments. He said the books were part of the donor’s contributions to human development.

He explained that the books were donated to the Catholic Diocese of Awka to complement the Church’s commitment to proper formation of individuals. According to him, they were a way to partner with the Church for the better future of the young ones and society.

In an interview with Fides, Igwe Okaa-Onwuogu said he was delighted that the books were donated to the Church by his subject and friend, Dr Augustine Okeke-Agbaga. He described the donor as one who shared his vision that education was the key for human and societal development.

The traditional ruler highlighted how some indigenes of the town had, through scholarship awards to some students of the town, extramural lessons in schools and adult education, improved Nawgu and brought the community to limelight.

In his keynote address at the handover, the author and donor, Dr Augustine Okeke-Agbaga, noted that the books were his contributions to the campaign against mass youth emigration.

The author called on the Church, parents, teachers, the state and NGOs, to participate actively in the campaign to reduce the number of youths who abandoned their academic work in Nigeria and became victims of slavery due to their inordinate quest for greener pastures abroad.

Dr Okeke-Agbaga, was represented by his wife, Mrs Loiusa Okeke.