Gen Ibrahim Commiserates with the Agbavo’s Over Son’s Death, Describes it as A Loss to the Nation

The Director General of NYSC, Major General Shaibu Ibrahim has described the death of Late Okwu Tony Uzoma, OD/21B/0801, a corps member who before his death was serving the fatherland in Ondo State as ‘painful, sad and great loss to the nation’.

He stated this when he paid a condolence visit to Mr. & Mrs. Ebere Agbavo, the parents of Late Okwu Tony Uzoma, the deceased corps member at their country home in Ibaa Community, Emohua LGA, Rivers State.

Gen Ibrahim who was represented by the Rivers State NYSC Coordinator, Mr. George Mfongang was accompanied on the visit by management staff of the state secretariat. 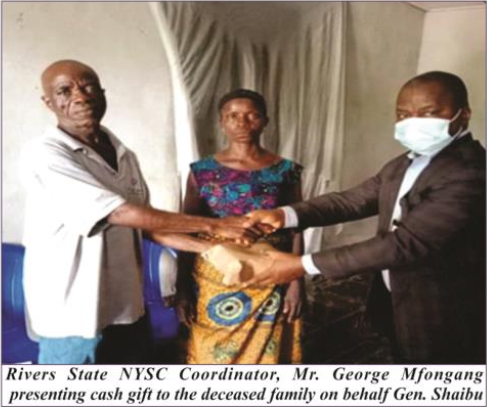 The visibly pained NYSC helmsman urged the Agbavos to take the death of young Tony in good faith and accept it as the will of God who gives and takes life when He so pleases.

The DG further described the Late corps member as a promising young man who was worked hard to make a difference  in his immediate family, community, state and the nation at large.

The family was presented with an official condolence letter and a sum of money by the DG to enable the family cushion the effects of expenses incurred during the burial.

Gen Ibrahim concluded by assuring the parents of timely payment of the Late corps member’s death benefits to the recognized next of kin.

The Late Okwu Tony Uzoma died on 10th April, 2022 from first degree burn suffered from a ghastly motor accident in Benin, Edo State while on transit.