The Chief of Staff to the President, Prof. Ibrahim Gambari; Minister of Works and Housing, Alhaji Babatunde Fashola and his Labour and Employment counterpart, Dr Chris Ngige, on Tuesday inspected work at the Second Niger Bridge.

The trio who were at the Onitsha -Owerri Road Interchange of the link road to the bridge, also walked the entire 1.6km length of the bridge to the Asaba, Delta State end.

The Managing Director of Julius Berger, Mr. Lars Ritchter, who conducted the dignitaries through work at the bridge, said work on the bridge would be completed on April 2.

Briefing journalists, Fashola reiterated the completion date saying: ‘April is completion date. Earlier I said it would end in February or latest end of the first quarter. 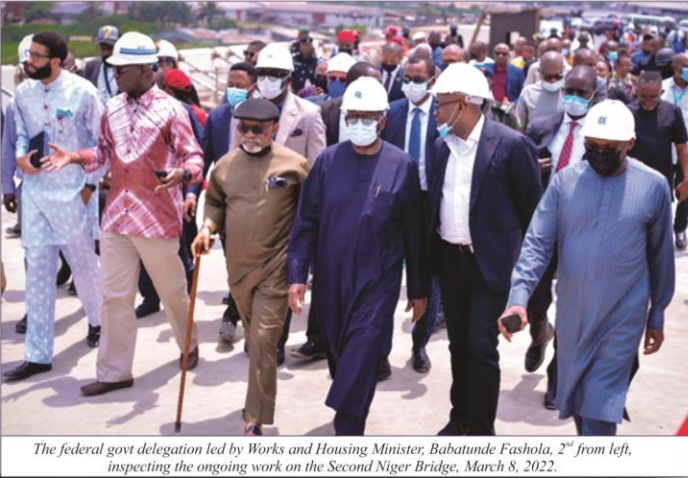 ‘Before now some people said there was no bridge but now we are walking on the bridge. This is real now. Plus or minus, when we cross the Ts and dot the Is, we will complete it as promised – 11 kilometres and 12 kilometers on both sides of the bridge.’

Fashola also said that in April, the high tension transmission line across the bridge would be relocated because they were too low on the bridge.

‘Power will be shut down for two weeks to enable the generating and transmission companies, as well as the Ministry of Power, to work seamlessly on the project.

‘We plead that those affected will cooperate as nobody will be shut out permanently,’ Fashola urged.