By Mercy Hill and Adejumoke Alebiosu

Ezinifte in Aguata LGA of Anambra State, Nigeria, witnessed an unprecedented gathering of men and women of faith, business, politics, government, corporate world, and indeed, all walks of life, from Wednesday 8 to Thursday, 9 June 2022, for the     vigil Mass and funeral Mass of the late Chief Lady Ngozi Florence Umeoji.

She was born 7th July 1951 in Aku village, Ezinifite, Aguata LGA of Anambra State, was an alumna of Loretto Teacher Training College, Adazi and University of Nigeria, Nsukka, UNN. Her hard work, intelligence, extraordinary skills saw her go against all odds to attain the status. 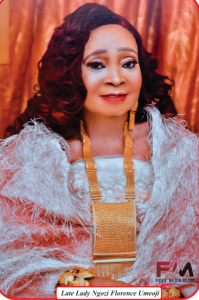 Married to Late Hon. Sir Andy Umeoji (Ide Mayor) who was a distinguished former Honourable member of the old Anambra State House of Assembly, a former Chairman of Aguata LGA for several years and an excellent community leader. Their marriage was blessed with 8 children who have excelled and are outstanding in their areas of specialization and endeavours.

The Pontifical concelebrated Holy Mass at St John’s Catholic Church, Ezinifite in Aguata LGA, was presided over by the emeritus Archbishop of the Archdiocese of Abuja, John Cardinal Onaiyekan, who led other 17 Bishops, over 500 priests and religious in the Mass.

The host Cardinal-designate, Peter Cardinal Okpaleke (Bishop of the Catholic Diocese of Ekwulobia, CADEK), who was the homilist at the Mass, noted that the deceased was a teacher who used her life of generosity to preach to others, explaining Lady Umeoji was an icon of generosity, known for her noble and humanitarian causes: uplifted the oppressed, gave hope to indigent children, succour to the sick, protection to widows and women in general. 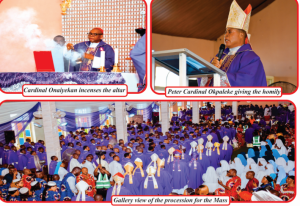 The cardinal-designate said that her exemplary life was also reflected in her children who never failed to contribute to the development of the church and God’s people. He regretted that her death came as a blow to all those she had impacted but with hope that her children had followed her footsteps.

In his vote of thanks, the first son of the deceased, Hon. Chukwuma Umeoji (Oba Aguata) who is a sitting member of the Federal House of Representatives & member of the Knights of St John International (KSJI), thanked God for the exemplary life and generosity of their mother. He said that he was happy that their mother bequeathed her legacy of generosity to her children and that she died and was buried gloriously among her people just as she had wished.

He thanked the Cardinal designate and Bishop of Ekwulobia, His Eminence, Peter Cardinal Okpaleke; the Bishops for their sacrifices to be present. He thanked especially the Auxiliary Bishop of Abuja, Most Rev. Anselm Umorem, who was present at both the vigil and funeral Masses. He thanked the priests, religious, in-laws, family support groups, and dignitaries from all walks of life in attendance.

Highpoint of the event were the official announcement of a Foundation set up by the Umeoji family to institutionalize the goodwill of their late parents, Dr Andy, and Chief Lady Ngozi Umeoji; choir rendition led by liturgical music composer, Jude Nnam; music rendition at the vigil Mass by Austica Memorial College, Nanka; dignitaries from all walks of life, among others. 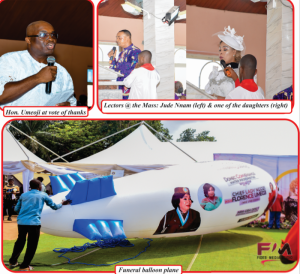