Fuel Scarcity: Will Things Get Worse

The cost of Premium Motor Spirit, popularly called petrol, may hit an astronomical high in most filling stations in Awka in the coming weeks if nothing is done about a recent hike in its ex-depot price by private depot owners report Alexander Johnson Adejoh and Daruwana Daku.

It was gathered that most private depot owners recently raised the cost of petrol from the approved N142-N145/litre price to between N162 and N170/litres, with others selling at N190/N200 respectively in parts of Anambra State.

This, oil marketers said, had already made some filling stations owned by independent marketers to start dispensing petrol at between N185 and N200 per litre, above the approved and regulated pump price of N165/litre.

But investigations by Fides revealed that the Nigerian National Petroleum Company Limited, NNPC, the country’s sole importer of petrol, is not aware of the hike in price by private depot owners. This was disclosed by NNPC itself.

Also, the regulator of the sector, Nigeria Midstream and Downstream Petroleum Regulatory Authority, demanded independent marketers to make a formal complaint, while the oil dealers argued that they had already informed the agency. 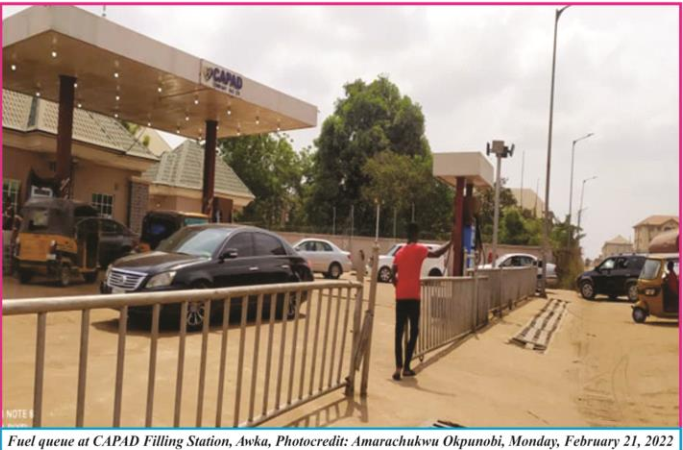 The National Public Relations Officer, Independent Petroleum Marketers Association of Nigeria, Chief Ukadike Chinedu, was quoted by newsmen as saying that although the number of filling stations in most parts of the country that sold petrol above the regulated rate was few, many outlets in other states currently dispensed the product at N170-N180/litre.

He said, ‘Petrol is being sold in private tank farms (depots) at N167 to N170 per litre. In fact, a friend contacted me to say that some tank farm owners were selling at N190 per litre in Awka.

‘So I want to tell you that fuel will be available but it will be expensive in many more areas in the coming weeks if they (depot owners) continue like this.’

He explained that the non-supply of the products by the NNPC to the oil company’s inland depots had warranted the high cost of products at private tank farms.

‘What is required is that the NNPC should supply these products to their inland depots to ensure that facilities such as Warri and Port Harcourt Refineries and some depots have products so that marketers can take fuel at the approved N142-N145/litre price,’ Ukadike said.

He added, ‘The National President of IPMAN, Debo Ahmed, has directed that all marketers should run 24 hours service and he appealed to security agencies to provide adequate security.

‘So that is what we need now and I also want to let you know that the price of petrol in some filling stations is above N165/litre as approved by the government. And this is because they are not getting the product at the approved NNPC price.’

On why the private depots were selling above the regulated price, Ukadike said it was what the government should address.

The oil marketer added, ‘If we buy PMS at N170/litre, how much are we going to sell it in our filling stations? And tomorrow the authorities will come and lock up our stations and use police to arrest our pump attendants.

‘Unfortunately, these things happen while the facts are there for all to see.’

Fides gathered last Tuesday that petrol sold for between N185 and N200 per litre in some filling stations in Awka, mainly because independent marketers purchased the commodity above the official depot price.

Ukadike added that the situation would persist unless the government called private depot owners to order.

He stressed that independent marketers would definitely run at a loss if they dispensed petrol at the official N165/litre rate after purchasing it at about N170/litre.

The manager of a filling station at Amawbia confirmed that some private depots were dispensing above the rate approved by the government.

‘Private depots are selling above the approved rate of N145/litre and if this continues, very soon petrol price will go above N190; even in Awka, because it is already like that in many cities,’ the independent marketer, who pleaded not to be named for fear of being victimized, stated.

But beyond the issue of the hike in the cost of the product is that of the importation of adulterated products which has been given as reason for fuel scarcity and accompanying long queues in some states of the federation, especially Abuja, the capital city.

In Awka, the Anambra State capital, however, the issue of adulterated petrol is yet to be experienced. According to the Manager of CAPAD, Filling Station, Awka, who did not want his name disclosed, the only fuel product that suffered adulteration was DPK or kerosene.

It will be recalled that stakeholders in the petroleum industries as well as consumers of the products had earlier queried how adulterated fuel could be imported into the country without the knowledge of the regulatory agencies such as the Nigerian National Petroleum Corporation, NNPC. The adulterated fuel have seen motorists complain of damage to their vehicles.

Even though the NNPC Group Managing Director, Mele Kyari, who spoke from Abuja, had blamed some petroleum marketers such as MRS, Oando, Emabeb, Duke Oil and Brittania-U, as at the time of this report, the companies mentioned, with the exception to Duke Oil, had disputed the claims of Mr Kyari in written form.

Meanwhile, many regulatory agencies, including the Nigeria Midstream and Downstream Petroleum Regulatory Authority, NMDPRA, had earlier blamed NNPC for the presence of adulterated fuel in the country. These divergent opinions have thrown Nigerians into confusion, such that questions as to who regulates petroleum products importation in the country are yet to be answered.

Following the situation in Awka, Fides gathered that the situation in the city was relatively different from what was going on in Lagos and Abuja. Awka is only experiencing hike in the fuel that was orchestrated by the markers’ attitude of hoarding.

One of the managers of a filling station in Awka, who craved anonymity, noted that the hike in fuel price was a national issue and was not limited to major cities in the country alone, even though he noted that most of the problems are coming from marketers who sell occasionally with intent to hoard the products and inflate prices.

‘The problem is a nationwide problem. Many depots refused to sell, though they open intermittently, sell for a short period of time after which they stop selling. This makes those that bought the product at the time of sale hike the price immediately,’ our source noted.

Sources also claim that the adulterated products are no longer new in the country and that they had nothing to do with marketers.

As at last Tuesday, it was also reported that most depots that sold at N165 were not even given chance to sells owing to long queues. Other depots who already had fuel were selling between N195 and N205.

Mr Ezeugo who stressed the need for government’s intervention in settling modalities on how the refineries should start working, also expressed his dissatisfaction with what he called selfish depots who made the products scarce, thereby causing an increase in the price.

A tricyclist, Mr Victor Ezeani, feared that the high cost of fuel would have a ripple effect on the economy as every means of livelihood was always tied to fuel which had an adverse effect on the cost of transportation.

Fides investigations revealed that transport fares have surprisingly remained same despite the current hike in the price of petrol.