Pope Francis said on Wednesday that he was “delighted” to learn that a Muslim group had overseen the translation of his latest encyclical into Russian.

In a message released by the Holy See press office on March 3, the pope said it was “a beautiful and joyful surprise” to hear that the encyclical Fratelli tutti had been translated into Russian and presented at a cultural center in the capital, Moscow. 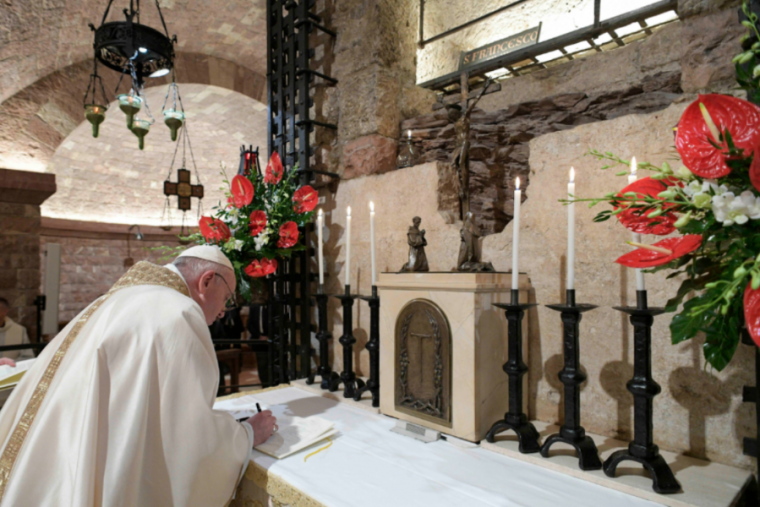 “In this way, it will be made available to a large number of men and women of goodwill who wish to confront this text,” the pope said in the message dated Feb. 17.

“I was also delighted and impressed by the fact that it was the Muslim International Forum that edited this Russian-language translation.”

According to its website, the Muslim International Forum seeks the “consolidation of moderate and constructive forces of the entire Muslim world.”

The pope said: “I think that reflection and dialogue on this encyclical can be of help not only for the Russian Federation, where dialogue between Christians and Muslims is called to grow, but for the human family as a whole.”

“Indeed, in the globalized and interconnected world in which we live, a gesture that is made in one corner has repercussions in every other part.”

Pope Francis released Fratelli tutti, which means “All brothers” in Italian, on Oct. 4, 2020.

The encyclical — his third after the 2013 Lumen fidei and 2015 Laudato si’ — expanded on themes contained in the “Document on Human Fraternity for World Peace and Living Together,” which he signed with Sheikh Ahmed el-Tayeb, Grand Imam of Al-Azhar, in Abu Dhabi in 2019.

The encyclical is currently available in nine languages on the Vatican website.

No pope has ever visited Russia, where an estimated 71% of the 144 million population belongs to the Russian Orthodox Church. Islam is the second-largest religion in the country after Christianity, with Muslims forming around 10% of the population. Catholics are believed to comprise about 0.1% of the population.

In his message, the pope said he was confident that “open and sincere discussion” of the themes of Fratelli tutti could foster interreligious dialogue.

“Indeed, fraternity comes from recognizing one Father. And, if we are all children of one Father, then we can call ourselves brothers and above all live as such,” he said.