A concert tagged ‘An Evening of Ageless Music and Conversation with the Sage, Fada Omega’, has been organized in honour of an academic don in the Department of Music, Nnamdi Azikiwe University, Awka,  Rev. Fr. Prof Emmanuel Umezinwa, to avail him the opportunity of entertaining his audience 20 years after his last stage performance.

The concert which was held on Sunday, December 5, at Testimony Place, Awka, Anambra State, witnessed the presence of about 50 persons who attended the programme prior to the invitation.

Fr. Umezinwa, a Catholic Priest of Ekwulobia Diocese, who regaled his audience with some of his songs, namely a Cry for Nigeria, Undertakers, Stop Fooling Yourself, Revolution and We Shall Overcome, said that his music was geared at achieving social reforms and positive changes needed for socioeconomic development.

He disclosed that his music videos which people had been requested for over the years would hit the airwaves soon as he has commenced the process with some students and directors from the department of Theater Arts and Film Studies of Nnamdi Azikiwe University, NAU. He noted that he had no date at the moment for the release of the music video as he did  not want to hurry the production process to avoid unnecessary errors.

The academic don during the interactive segment of the concert which was moderated by the Managing Director and Chief Executive Officer of National Light, Sir Chuka Nnabuife, revealed that he started performing while in the seminary and later started writing down inspirations which he transformed to music.

Speaking on what motivated artists during musical performances, Fr. Umezinwa said that artists often drew inspiration from common things happening around them or from things that were personal to them. He disputed the fact that some musicians usually used false voices during performances, saying that every range of one’s voice was the person’s range and not a false voice. 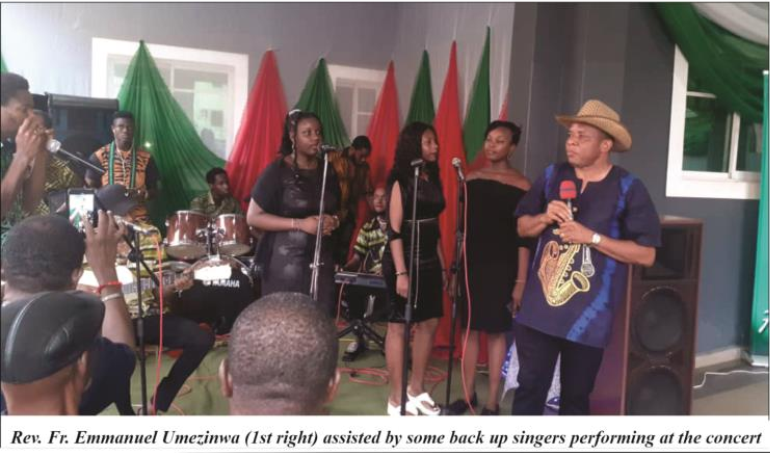 He however explained that every human person had some undiscovered range and maintained every song had a voice that would suit it.

He noted that he was able to amplify his voice after the voice training he went for in 2005 in New York, USA, saying that his baritone was part of the things that distinguished his music.

Speaking on motive behind the concert, the Convener, Mr. Gerald Eze, said the intention was to sustain what Fr. Umezinwa was known for, saying that the concert was a way of immortalizing the musical genius which had been produced by the priest for over 20 years.

He explained that the idea behind the concert was rooted after his encounter with some students from the Music Department of Unizik who were ignorant that their tutor, Fr. Umezinwa, was a music performer. He maintained that the concert was to bring to mind the ageless music which had been produced for humanity by the cleric.

Eze, described Fr. Umezinwa as a mentor and a great teacher who usually burnt himself out for others to see the way and expressed concern that as a candle, the priest could not sustain himself, saying that it was apt for what was produced by music guru over 20 years to be sustained.

‘This is fair attempt to immortalize the genius that he has produced for us and the music he has done for over 20 years. I felt it was important to engage a small community, quality audience and connect them to Fr. Umezinwa,’ he stated.

Eze, who was Fr. Umezinwa’s student, said there would be other concerts for Fr. Umezinwa to perform and disclosed that a larger audience would be invited for the next.

One of the invited guests, Barr. Amaka Ezeno, said she was thrilled that the event happened in Awka and disclosed that limited social activities in Awka nearly prevented her from marrying her husband, saying such concerts helped people to relax and ease out stress.

Barr. Ezeno, a legal practitioner with Testimony Chambers, described Fr. Umezinwa as a man of many wonderful parts and likened him as a sage in all aspect.

Also Speaking, a former house member that represented Aguata II Constituency in the Anambra State House of Assembly, Hon. Ikem Uzoezie, termed Fr. Umezinwa’s performance as timeless, saying the music performed by the priest captured the soul of the moment.

He expressed optimism that the songs would assist in social revival needed in society and noted that the sole purpose of music was for the soul and mind to be in tune. He said that young musicians had a lot to learn from Fr. Umezinwa, especially in capturing their audience.

Contributing, an Ekwulobia Diocesan Priest, Rev. Fr. Chika Okpalike, said the performance was multicultural in all aspects, saying that Fr. Umezinwa’s music and composition did not have age as some of the music compositions had stayed for over two to three decades and still relevant in the moment.

Fr. Okpalike, an Expert on African Traditional Religion, regretted that the music world at present had become mundane as it had been taken away from the moral standards, saying that efforts had been to correct the anomalies. He expressed conviction that the priest’s performance would teach people, especially upcoming artists, that they could key into music and promote morality.

He described Fr. Umezinwa as a change agent who would have made the world a better place if given the will power, saying that his songs ‘Undertakers and Revolution’ were critical of the social and political sphere.