The remains of the late Rev. Fr.Dr. Benedict Obikwelu was committed to mother earth at the Church grave in St. Patrick’s Catholic Cathedral, Awka on 29th November, 2018.

The Requiem Mass for the late priest attracted the crème de la crème from all walks of life including the Bishop of Awka Diocese, His Lordship Paulinus Ezeokafor, priests, religious, Parishioners , family members and well wishers, who converged at the church to pay him their last respect.

Late Father Obikwelu was born in 1933 to the family of Mr. & Mrs Obikwelu of Nri LGA in Anambra State of Nigeria and died on 31st October, 2018.

The deceased fondly called” Obio” by all who encountered him during his apostolate, was ordained a Catholic Priest 5th May, 1969 and had since then had his apostolate covering major parishes in the Awka Diocese.

Speaking during his homily at the Church Mass, Msgr. Luke Anameze, enjoined Christians to always live their lives prepared for the final day on earth because for him, all men are sojourners on earth and as such earthly possessions remained ephemeral.

For his part, the Bishop of Awka Diocese, His Lordship Paulinus Ezeokafor, who precided over the Mass, described the death as a necessary end of all mortals, advising Christians to live Christ- like lives worthy of emulation.

Presenting a tribute on behalf of the Family, the deceased’s younger brother, Mr. Ossy Obikwelu, said that his late brother, just like Paul the Apostle, fought the good fight of faith and accomplished his course here on earth.

He assured that the family members will continue to live in peace just as the late priest had wished.

Speaker after speaker, including the representative of the Nri Vocation Association, the St. Mary’s Eucharistic Parish all noted that Fr. Obikwelu was the first indigenous priest of Nri, even as they pointed out his good deeds in their communities. The Nri representative said peace had been experienced in the community since the deceased was ordained Priest.

Commiserating with the bereaved family, Fr. Ignatius Onwuatuegwu, while speaking to Fides, recalled all his wonderful experiences with the deceased and prayed that his soul found eternal rest with the Lord.

Cross section of Religious at the Holy Mass in St. Patrick’s Cathedral Awka.

A cross section of Priests at the Mass Preceding the burial.
2018-12-14
fidesadmin 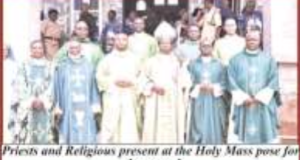 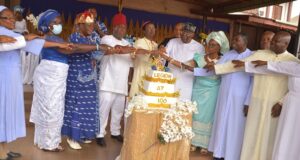 Legion of Mary at 100: Immaculate Conception Regia Celebrates in Awka 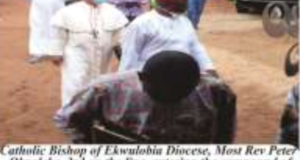