Rev Fr Ezeokeke, who stated this while leading in his concelebrated Silver Jubilee Thanksgiving Mass at St Joseph’s Parish, Awka, last Sunday, February 23, said he was grateful to God for his grace and sustenance on him for the 25 years he had spent in the sacred Catholic priesthood.

The jubilarian, who also thanked his teachers for the good formation he said they gave him, equally offered the Holy Mass for the repose of the soul of his late father, Mr Andrew Ezeokeke, and for God’s divine healing on his mother, Katrina Ezeokeke, who was ill.

He appreciated all that had supported him in the course of his priesthood, and commended the parishioners of St Joseph’s for what he described as their humane and humble attitude, saying that St Joseph’s Parish, Awka, was the best around.

Ordained a Catholic priest for the Catholic Diocese of Awka alongside others on August 20, 1994, Rev Fr Ezeokeke, who hails from Oko, Orumba North LGA, Anambra State, served as a vicar at Holy Name Parish, Umuchu, 1994-1998; a former parish priest of St Paul’s Parish, Ogboji and St Paul’s Parish, Achalla, at various periods, as well as a former dean of Achina Deanery. The jubilarian also served in the Catholic Diocese of Abakaliki (on mission) from 1994 to 2005.

In his homily, another Oko indigenous priest, Rev Fr Melchizedek Obi, thanked God for His love and blessings on the Jubilarian. He described priesthood as a noble vocation, saying that God chose those it pleased Him, and despite their unworthiness gave them a share in the sacred priesthood of Christ.

The homilist, who based his reflections on the Book of Leviticus, Chapter 25, from Verse 1 of the Holy Bible, highlighted the importance of jubilee celebrations and the need for the jubilarians to let go of some lifestyles as they aged in their various vocations.

According to him, jubilee was a year of pardon, and the number of years the celebrant benefitted from the mercy of God ought to be commensurate with the love and pardon which he gave out to people. He described Christianity as the pillar of all religions, and advised Christians against lives of retaliation but to instead, live out their lives in emulation of Christ, who they bore witness to.

The Assistant Chancellor, Catholic Diocese of Awka, Rev Fr Anthony Ezeokeke (who was baptised as a child by the silver jubilarian), 1st left, leads in prayers.

Rev Fr Nnaemeka Ezeokeke (3rd left), being ushered into the reception arena by the cultural troupe of the parish Catholic Men’s Organisation. Fr. Ezeokeke is flanked on his left by the parish catechist, Professor Linus Ezenweke. 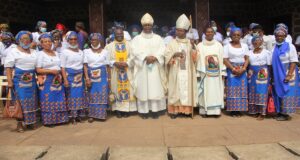