Ordained a Catholic priest for Awka Diocese alongside 25 others on August 17, 1996, the President of Awgbu Religious Vocation Association, Rev Fr Bonaventure Nwankiti, on Sunday, January 2, 2022  celebrated his 25 Years Priestly Anniversary amid joy, fulfilment and thanksgiving to God. 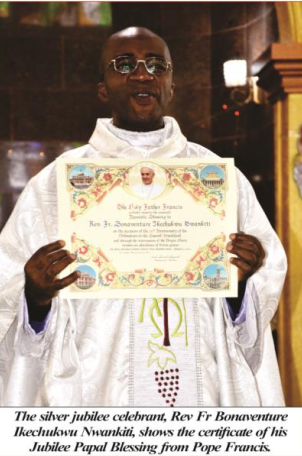 Earlier when he led in his concelebrated Silver Jubilee Anniversary Thanksgiving Mass, the Awgbu indigenous Rev Fr Nwankiti, thanked God for his grace and sustenance. He appreciated the many priests he had worked and lived with, as well as the parishioners of the parishes he had worked in, for what he described as their supportive roles in making his pastoral ministry a happy and fulfilling one. 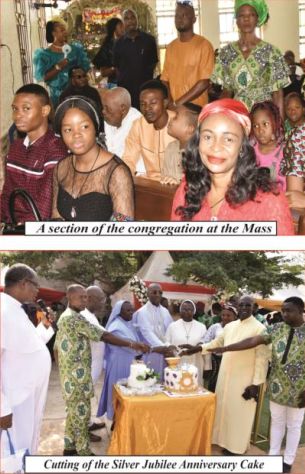 The silver jubilarian appreciated his bishops and his formators for their special care and fatherly support in the course of his formation to priesthood. This was even as he thanked his mother and siblings for what he described as their consistent support and care.

In his homily, an Awka Diocesan priest based in Lagos, Rev Fr Peter Obiefuna, congratulated the silver jubilarian and urged him to hold on to consistent prayer life and the grace of God so as to succeed in the greater responsibilities ahead.

Fr Obiefuna enjoined the laity to always support their priests and religious, as well as advise them properly. ‘Tell your priests the truth always, especially in meetings such as parish council meetings. Do not mislead them, lest the law of Karma catch up with you, the homilist advised laity. 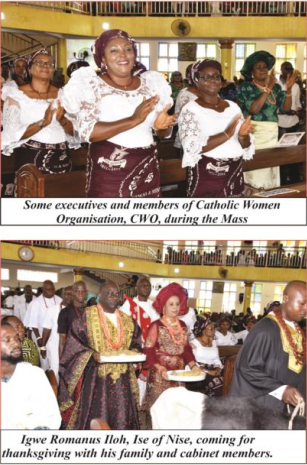 In the celebrant’s brief biography which he authored, his twin brother priest and friend, Rev Fr Henry Ezeobi, described Fr Nwankiti as a versatile, humble, hardworking, sociable and amazingly humorous individual, who stood out as a real priest of God.

For his part, a former Education Secretary of the Catholic Diocese of Awka, Rev Fr Hilary Obinna Nwajagu, in his write up titled, ”The Man, Rev Fr Bonaventure Nwankiti”, eulogised the virtues of the celebrant who he described as a prayerful priest, a civil engineer, a historian, a diplomat and a lecturer who was pragmatic and humorous.

According to Fr Nwajagu, Rev Fr Nwankiti’s sense of humour was infectious and his classless approach to relationship made him a friend to all.

Fondly known as Uduakommili, ‘Nk[t[ ad[ mma onuno, Q kaa obulu xzq’ Sharp Sharp and Peoples, Fr Nwankiti was described as a dynamic priest who was loved by many people.

In an interview, the Chairman of the Organising Committee, Bro Bonaventure Obi, thanked God for the good work of Fr Nwankiti  barely two years he had been their parish priest. He described the priest as a great homilist who had been devoted and committed to his pastoral duties.