The founder of a prominent non-denominational movement in India has returned to the Catholic faith of his baptism, after more than a decade as a Pentecostal pastor and traveling preacher.

Sajith Joseph, 36, was confirmed Dec. 21, 2019 at St. Mary’s Cathedral in Punalur in the southern Indian state of Kerala. His family and nearly 50 other members of his movement were received into, or came back to, the Catholic Church the same day.

Joseph is the leader of Grace Community Global, which he founded in Kerala in 2011. 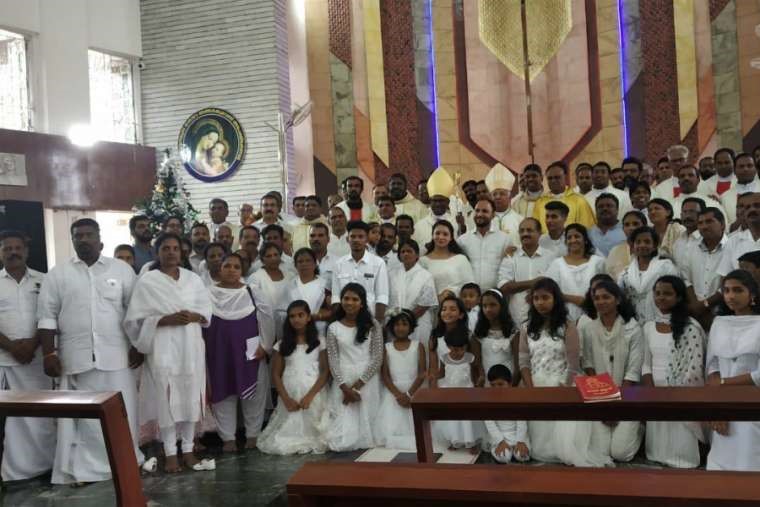 Sajith Joseph and others after being received into the Church at St. Mary’s Cathedral in Punalur, Dec. 21, 2019. Courtesy photo.

The group will now be under the jurisdiction of Bishop Selvister Ponnumuthan of Punalur as a Catholic association. Joseph’s Facebook page describes Grace Community Global as “an ecumenical movement of the Latin Rite of the Catholic Church.”

The group has around 2 million followers in 30 countries, and reaches many people through its televangelism programs.

Fr. Prasad Theruvath, OCD, was asked to act as chaplain to the group; he has served as the secretary of the Kerala Bishops’ Commission for inter-church dialogue.

Fr. Theruvath told CNA that a process of sorting out how the members of Grace Community Global want to proceed has begun. Most of the members are Protestant, but the group is also followed by Oriental Orthodox Christians, as well as Hindus and Muslims.

Those who do not want to continue with the group under its new Catholic identity will return to their “mother churches,” but there are many others who want to join the Catholic Church, he said.

They are trying to proceed with prudence, Fr. Theruvath explained, by “slowly preparing” those seeking conversion. “We are in the initial stages, there is lots of work to do.”

About the future of Grace Community Global, Joseph said that “the system has changed, but the function is the same.” Under the direction of the Kerala Bishops, the group will continue their conventions and Sunday fellowship gatherings.

Joseph told CNA he founded Grace Community Global while he was teaching in a Protestant Seminary. He said he was “seeing the difference between Catholic theology and Protestant theology” through his studies, especially of early Church history.

He was reflecting a lot on Christian unity, he said, and he began the non-denominational group, intentionally calling it a “community” rather than a denomination or church.

“I was trying my level best to bring unity to Pentecostal groups through Grace Community Global,” Joseph explained, adding that he eventually realized this unity was “impossible because of the difference of doctrines.”

He came to see there is a “gap” in Protestant History which can only be filled by being a part of the apostolic Church, he said.

What followed were four years of discussions with the bishops of Kerala, canonists, theologians, and eventually the Vatican, Joseph stated.

Joseph was born into a Catholic family, but when he was 16 years old his parents left the Church to join the Assemblies of God, a Pentecostal Ecclesial Community.

Joseph was moved to become a preacher; by the age of 19, he was already preaching to small groups of people in Kerala.

He studied Protestant Theology and became pastor of an Assemblies of God Community. He taught at a Protestant Seminary for a period, and started travelling to preach.

In 2011, he started Grace Community Global, which he led for several years before discovering that the unity he was seeking could be found in the Catholic Church.

Around the time he started Grace Community, when Joseph was 28 years old, he had a powerful experience in prayer, he said, including a vision of Christ crucified and an altar, which he believes was revealing to him the truth of what Christ suffered on the cross, and his presence in the Eucharist.

“As a Protestant pastor, I was not able to digest that image [of an altar],” he said, noting that he wondered why God was showing him this.

According to Joseph, this experience left him with “a great boldness to pray for the sick,” leading him to start his healing ministry.

Fr. Theruvath said Joseph has the supernatural gift of healing, an extraordinary charism received through the power of the Holy Spirit.

The priest said “the Holy Spirit is working through this.”

Editor’s note, 2020 Jan 17, 0914: An earlier version of this story erroneously indicated that Grace Community Global had received a permission from the Dicastery for Laity, Family, and Life, under whose jurisdiction it would fall. It has been corrected.