Leading in the concelebrated wedding Mass at St Patrick’s Cathedral, Awka, an Awka indigenous priest, Rev Fr Christopher Chinedum Nnonyelu, urged the couple to uphold the vows which they took.

Rev Fr Nnonyelu, who received the consent of the couple, commended the groom, Engr Julius Nnajide, for holding on to the Catholic faith, as well as for remaining steadfast in the choir and other groups he belonged to in the Church. He encouraged him to lay the same foundation of strong Catholic faith for his family and children. 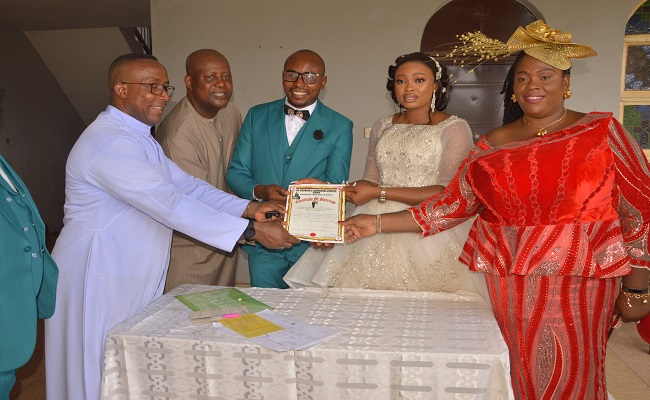 The Manager/Principal, Bubendorf Memorial Grammar School, Adazi-Nnukwu, Rev Fr Theodore Chukwuedozie Ekwem, in his homily on the theme: ”The Beauty of Marriage,” advised the couple to build their marriage on God, who is the author of marriage.

He noted that beautiful marriages were not founded on ephemeral things, but instead, on values that would never fade. Pointing out that everything in life was transient, Fr Ekwem, who assured the couple of prayers, warned them against what he identified as attractions that did not last in relationships.

The priest explained that the beauty of marriage rested primarily on the fact that it was a participation in God’s creative design and agenda. According to him, God never faded, and in the same way, marriage which was instituted in his name had enduring character. Rev Fr Ekwem added that the presence of God and fulfilment of His Divine plan through marriage, made marriage to be what he described as a lovely pearl.

Addressing the couple, the homilist said, ‘Julius and Gift, it is your duty to cherish this beauty of marriage. Be united in prayers. Always seek the opinion of God before taking decisions in marriage. Always ask what God wants in every circumstance, especially in those tough moments of your married life, because it will not always be rosy. Free your minds for the relationship to grow. Discover and maintain those values you found in each other. Ensure you sustain the moral values of respect, understanding, loyalty and hard work.’