Forgive Me for I Have Sinned, Ekene Nwosu Apologizes to Bishop Ezeokafor

…He is forgiven, other Matters, Left for Church – Bishop Ezeokafor

By Chioma Ndife and Precious Ukeje

Oliver Ekene Nwosu, an indigene of Owerre-Ezukalla in Anambra State, who was unlawfully ordained priest in the Catholic Diocese of Morogoro in Tanzania, sequel to his suspension by Rome after diaconal ordination, last Sunday, May 23, publicly apologized to the Bishop of Awka Diocese, Most Rev. Paulinus Ezeokafor, for erring and attempting to ridicule the person of the Bishop.

He, alongside his widowed mother, was at St Patrick’s Cathedral, Awka, where he admitted to have wronged the Bishop. He pleaded with the Awka Diocesan Chief Shepherd to forgive him as he, the bishop had the power to do so.

According to Bishop Ezeokafor, Nwosu had approached him last week in his office to seek his pardon for wrongfully attempting to ridicule his person before the public.

The bishop, who publicly accepted his apology, said he had insisted that Nwosu brought the apology to a public space since the embarrassment was made publicly on the social media and other traditional media platforms.

He also disclosed that Nwosu had in 2015, approached him with information of his belonging to a congregation outside the diocese, which, however, was not substantive in the Catholic Church at the time, adding that he had accepted to ordain him  in the diocese if he met necessary requirements and then go back to his congregation when it became substantive. 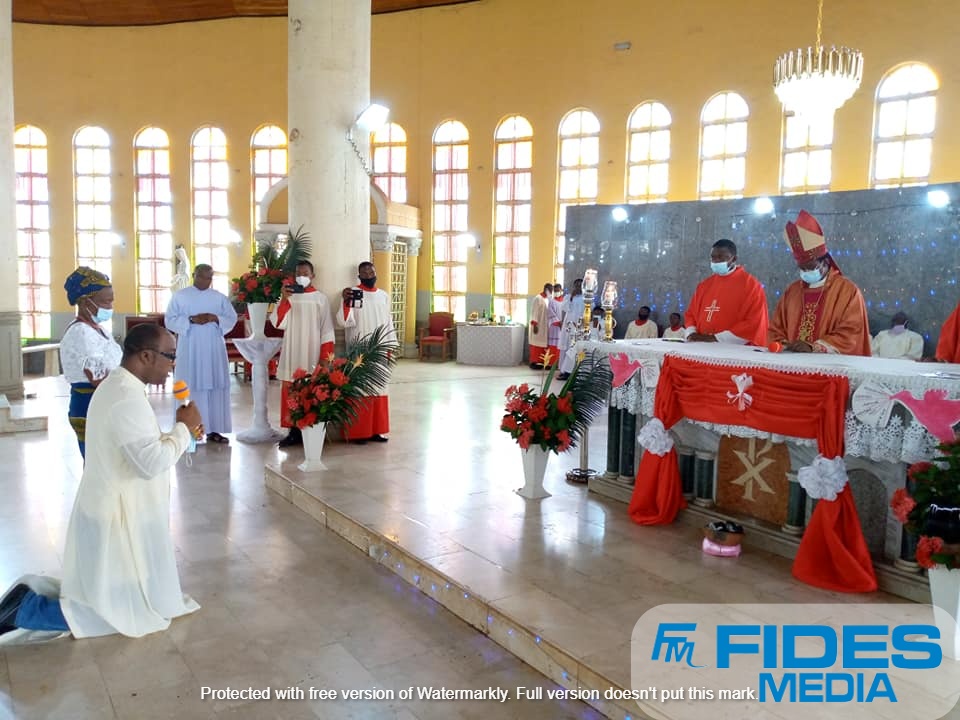 The Awka Chief Shepherd, while speaking to news men, noted that after Nwosu’s diaconal ordination, he had been suspended for being found wanting in some aspects, a development which disqualified him from continuing in the order of ministerial priesthood.

Bishop Ezeokafor said that through enquiries, we discovered he had not received the acolyte and the lectorship. And eventually, other realities about his life came up, which, if we had gotten, he would not have been ordained a Deacon.

The Catholic prelate who noted that the matter went as far as Rome, said, the church advised Nwosu to apply for dispensation because it looked like it would not be possible to make him a priest, looking at some events around him.

‘I told him, gave him even a letter from Rome and  he did not want to do that. After some time, I got a note from the Diocese of Morogoro in Tanzania for his ordination.

‘Rome interacted with the diocese, asking how he was ordained because certain documents must be presented because priesthood is not something you just pluck from the mango tree; it has a process,’ Bishop Ezeokafor explained.

Nwosu, who was however ordained in another diocese, was later written to, informing him of the suspension of his priestly ordination, a development necessitated by the doctrine and tradition of the Catholic Church.

He was asked to apply to be laicised but he was hesitant to pick up the letter. He rather reacted by saying so many things with the intent of pulling down the Bishop since he would not be ordained priest.

‘Only few days ago, he came to my office to apologise. I said I have nothing against you but I cannot answer for the Church,’ the Catholic prelate said.

Quizzed on what steps Rome would take, Bishop Ezeokafor said forgiving Nwosu did not cancel his suspension from the priestly ordination by the Church and so, it would be left for the Church to take decisions and added that his ordination was illegal.

Rendering the public apology, Nwosu said he had returned to Awka Diocese and to Bishop Ezeokafor, whom, he said, he had greatly wronged as a prodigal son, and requested that the blessing of the prodigal son be bestowed on him.

He said he could have come to render the apology with his father, but regretted that his father was no more as his body had been deposited in the mortuary.

‘I am back like a prodigal son and I plead that the blessing of the prodigal son should be my portion,’ he explained.

While speaking to the press, Nwosu said he could not even recall what happened because the event of the day had overwhelmed him, adding that the important thing was that he got the Bishop’s forgiveness.

Making allusions to the Bible, Nwosu said, ‘Just like Christ, if you could remember, Peter denied Him; John ran away during the time of trial and persecution. When Christ rose from the dead, he never mentioned those things. Rather, He looked for His disciples and when He found them, He gave them peace,’ adding that was what the Bishop did to him which was what he wanted.

Asked the way forward, he said he left everything in the hands of God who knew how to plan things, as well as Mother Mary, adding that it was God who planned the day’s event.