They had been riding rough shod over police and other security formations across the Southeast. From Imo State to Ebonyi to Enugu, it had been same story of burning of police stations and offices of the Independent National Electoral Commission, INEC, as well as killing of security personnel. They did not stop at that. They also attacked police personnel attached to politicians, with one of the most daring being the killing of three police personnel attached to the guber aspirant on the platform of the All Progressives Grand Alliance, APGA, in Anambra State, Prof Chukwuma Soludo, in Isuofia, Aguata Local Government Area of the state, By Jude Atupulazi, with additional reports by Alexander Johnson Adejoh and Adejumoke Alebiosu.

It seemed as if nothing could stop them until they attacked the B Division of the police in Awka, Anambra State, and the state INEC office, also in Awka, in the late evening of Sunday, May 23. The attackers are the ones popularly referred to as the unknown gunmen. At the end of the attack, Fides learnt that four of the attackers were neutralized, with two arrested; even though the state police Commissioner, Mr Chris Owolabi, preferred to keep what seemed an ominous silence on this during his press conference last Monday at the INEC office in Awka. 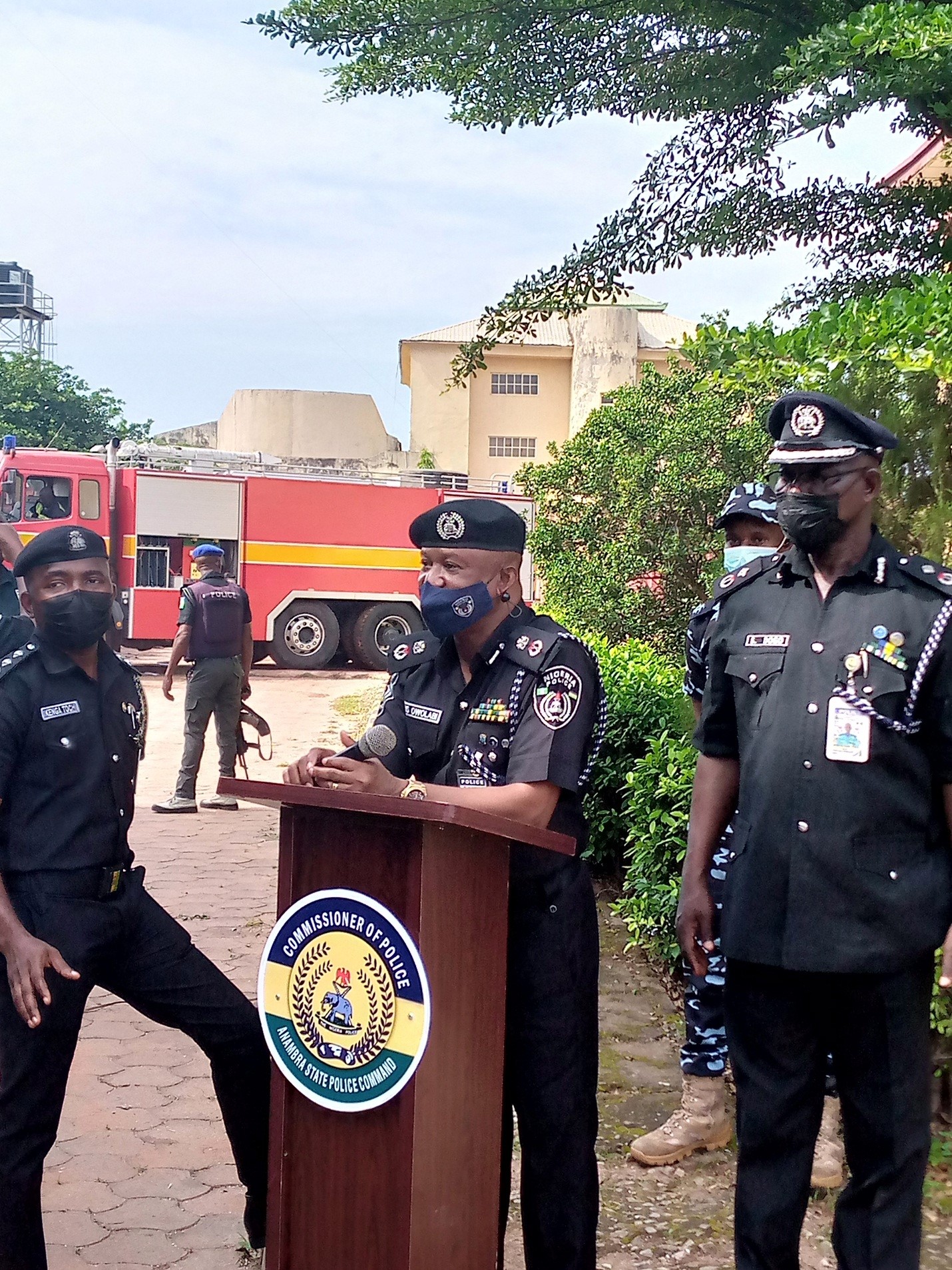 Anambra State Police Chief, Chris Owolabi during a press briefing at INEC office, Awka, in the wake of the attack on INEC’s and police facilities in Awka last Sunday. Dateline: May 24, 2021.

Chris Owolabi said his men confronted the gunmen, overpowered and recovered three Hilux vans from the bandits, as well as arms and ammunition.

‘It was reported in the news last night (last Sunday) that hoodlums operating in three Hilux vehicles carried out coordinated and simultaneous attacks at both the B’ Division headquarters and State INEC office, Awka, at about 8:20pm.

‘The hoodlums had attacked the Police Division as a decoy and then proceeded to the nearby INEC office where they attempted to set ablaze the main headquarters building. They were successfully repelled by the police and other security agencies who quickly mobilized to the scene, forcing them to scamper for safety with many sustaining gunshot wounds as revealed by blood trails in the surrounding bushes,’ the police chief disclosed.

CP Owolabi who thanked God and other security agencies for partnering with the police in the fight against insecurity and for the success of the operation, hailed his officers for what he tagged gallant repel fight which he described as 98% successful, adding that most of the attackers ran into nearby bushes with gunshot injuries and that the State Police Command recorded no casualty during the reprisal attack.

Meanwhile, confirming what was lost by the INEC in Awka, Dr Nkwachukwu Orji, INEC Resident Electoral Commissioner in Anambra State, said that six INEC collation vehicles, the collation centre and part of the store building were burnt down from an improvised explosive device (IED) thrown into the premises.

Parts of the road to the INEC office were smeared with blood, indicating that some casualties were recorded. Indeed, a reliable source confirmed to Fides that four of the attackers were killed after they were engaged by the police in front of INEC office. Two of the Hilux vehicles used by the attackers were seen at the scene, with one badly smashed on its hood.

The Awka attack was the first to be effectively foiled by the police, a development that, many believe, will boost the morale of the police.

During the attack, Fides further learnt, a robbery was going on at Miracle Junction at Ifite Road, close to Nnamdi Azikiwe University, Awka. The robbers were reported to have operated from hostel to hostel, dispossessing students of their phones and cash. With the full attention of the police focused on repelling the attack by the unknown gunmen, the robbers had a field day.

Fides also gathered that prior to the attack by the unknown gunmen, they had gone to a nearby filling station in the three Hilux vehicles where they bought fuel and filled some gallons which were believed to be used for setting fire to targeted facilities. It was from there that they moved into attack It was also learnt that one of the recovered Hilux vehicles was stolen from OCHA Brigade, Onitsha, earlier.

The attack has not come without its drawbacks as it has affected the businesses of many people. The hardest hit was the popular Xfit Lounge at Ekwueme Square. On the evening of the next day when Fides went there, the usually bubbly place was almost empty, with only about four people seen there.

One of the food vendors there told Fides at about 7.30pm that they could not sell what they had prepared because people had not turned up. She said they were about to close for the day, partly out of fear of another attack and lack of patronage. For a place which normally does big business at that time and closes around 12am, the attack had certainly taken a toll on their business.

Meanwhile, an Awka based trader who sells food items at Nodu Market who pleaded anonymity, told Fides that both her and her husband witnessed everything about the attack on the Independent National Electoral Commission, INEC Headquarters, and B’ Division Police Station that fateful day.

The trader, while interacting with Fides at her shop last Monday, said that the gunmen drove in through St. John’s Hotel, using the CAPAD Filling Station axis to Aroma Junction in three Hilux vans (2 black and 1 white); all dressed in black attire, while some of them wore black and red berets.

She also revealed that while her and her husband drove behind the attackers, thinking it was a vigilante group on surveillance patrol, the men began to chant, a development, she said, that made her husband to speed off.

‘Just before we could arrive home, they started shooting sporadically, scaring people and forcing people to run for their lives. The shootings lasted for close to two hours because it started few minutes to 8pm and lasted even till around 10 pm,’ the source said.

On reaching the scene of the attack at INEC headquarters on Monday, May 24, Fides spoke with a police officer who disclosed that the force overwhelmed the hoodlums who came to kill and burn down the police station and the INEC office.

‘The boys came fully prepared but we showed them pepper. As you can see, some of them ran away, leaving the three Hilux vans they came in, but we killed the remaining bastards,’ the officer said with pride.

The failure of the attack and the arrest of two of the attackers, some believe, may have marked the beginning of the end of such attacks as the arrested suspects are expected to give a lot of insight into the faces behind the mask.

A journalist, name withheld, concurred and expressed confidence that the police would be buoyed by the success to put the criminals permanently on the run.

The next few weeks will determine whether indeed, there is cause for optimism. When Fides contacted the image maker of the State Police Command, Ikenga Tochukwu, last Wednesday for an update on the matter, he said the police had not concluded investigations and would make the results known when they were ready.