A substantial part of six local government areas of Anambra State are currently under water.

The flood has cost indigenes of the area their crops, homes, livelihood and even lives, and is regarded as the worst in many years, reports Ikeugonna Eleke.

In Ayamelum, Anambra East and Anambra West, houses have been submerged totally, while residents have fled, taking refuge in school facilities in the upland areas of their various communities.

In Ogbaru, Friday, October 7, two boat mishaps happened on the same day claiming lives. While one of the boats, a big sized boat was initially reported to be carrying 85 passengers when it capsized, the State Emergency Management Agency, SEMA, later put the number of people on the boat at about forty, with ten bodies recovered, while thirty people were rescued.

In the other accident involving a smaller vessel said to be a flying boat which capsized as a result of engine failure, five passengers were reportedly aboard it, with all five losing their lives.

A rights group, International Society for Civil Liberties and the Rule of Law (Intersociety) has called for enquiries into the circumstances leading to the death of the victims. 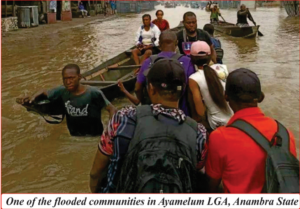 In a press statement signed by the chairman, Board of Trustees of the group, Mr Emeka Umeagbalasi, he said the incident was beyond issuance of press releases by government to condemn the incident.

His words, ‘The tragic mass deaths are beyond a mere statement of expression of sadness or shock and extension of condolences to the bereaved families by Prof Charles Chukwuma Soludo led Government of Anambra State.

Losing defenseless and law abiding citizens of Anambra origin and residency in a day in such preventable or avoidable boat mishaps is enough to fly the flag at half mast or declare a state of mourning and public holiday if the authorities of the Government of Anambra State are truly sensitive to the safety of the citizenry and conscious of the sanctity of human lives.

‘It is not enough for the present Government of Anambra State to issue a sympathy message or offer bread and butter and blankets and mats to flood victims and go home and rest.

‘The deaths recorded in the two boat mishaps would have been prevented if the failed portions of the Atani-Ogwuikpele and the Ozubulu-Atani Roads had been timely rehabilitated and proper water channels provided and drainages, gutters and other waterways unblocked.

‘It was the inability of the government to ensure the above that made it possible for River Niger to bust into the left side of the residential areas of the Ogbaru interior and urban, thereby blocking and cutting off vehicular movements along the Atani-Ogwuikpele Road, forcing most of the passengers to use boats as the only alternative means to their destinations.’

The group called for the rehabilitation of the roads linking the areas, saying that doing so could avert such occurrences in the future as the people could use roads, instead of water, especially during the current period of flood, when, he said, water travel was dangerous.

Meanwhile, The National Emergency Management Agency (NEMA), and the Disaster Response Unit (DRU) of the military have commenced an aerial view operation to rescue persons displaced or trapped by the rising floods in Anambra. 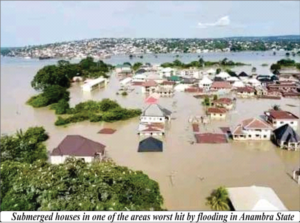 Mr Thickman Tanimu, Zonal Coordinator of NEMA, South-East, told journalists on Monday in Awka that it would aid the airlifting of trapped persons in the affected communities.

He said, ‘Search and Rescue (SAR Operations) have commenced today (Monday). The Military DRU has engaged and has started Air Recce or Aerial view to collect imagery intelligence of the affected communities.

‘This will help to ascertain displaced and trapped persons who need to be evacuated to pave the way for air lifting.’

Tanimu said the Presidency and the Director-General NEMA, Mustapha Ahmed-Habib, while commiserating with the state government and flood victims; including the bereaved, approved the relief materials.

‘The relief materials will hopefully arrive on Tuesday and be ready for delivery directly to victims. These items are meant to complement the efforts of the Anambra State Government in providing immediate succour to victims and aid their speedy rehabilitation,’ he said.

For the time being, philanthropists, politicians and other good spirited individuals have been providing help to victims who live in several camps within their communities.