Success is not always about greatness. It is about consistency. Consistent hardwork leads to success and then, greatness will follow.

This week on Inspirational Personality, we will like to bring to your read, the story to stardom of popular Nigerian music artist, Flavour, culled from his several interviews on the internet. Flavour  understood  that waiting  for inspiration  was not an option, but working consistently towards achieving  his goal was mandatory.

Consistency will not only have you achieve it in time but it also reveals greatness in the process.Have an interesting read!

Flavour who is also known as Flavour N’abania and the ‘Flavour of Africa’ is a Nigerian Highlife Afro musician, songwriter and instrumentalist. He is said to be Africa’s, highlife king. His songs are popular, danceable and enjoyable.

Flavour N’abania was born on the 23rd of November 1983. He was born in Enugu, although he hails from Umunze in Orumba South LGA of Anambra State. Flavour is the third child of a family of 12, so, growing up was much fun.

He played the drums in his church and went to the church to play on his own even when there was no church service. For this reason, his pastor noticed him and introduced him to his friend, the owner of Soundcity Communications.

Flavour went to visit them and realized he needed to be a part of the band to realize his dreams. He went home to tell his parents about it, but they didn’t agree because they wanted him to go to school. He wasn’t ready to take no for an answer. So he left his parents house and moved in with the band members. While with the band, he learnt how to play different instruments like the drum, piano, guitar, etc. 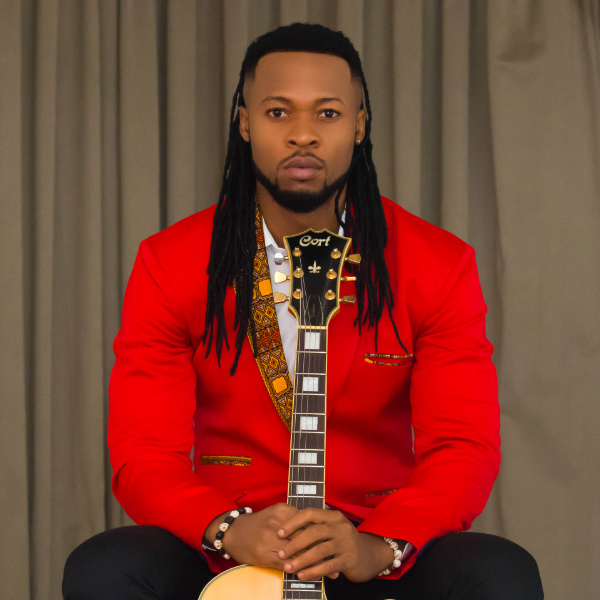 Flavour got his stage name when he was 15 years old. As a member of Soundcity Communications, he always followed them to concerts but did not have a stage name. It always felt odd when others are being introduced.

Meanwhile, there was this fan, Flavour Shelters who always came to watch them play. Flavour Shelters was into real estate and was admired by Flavour N’abania who wanted to be like him so he named himself Flavour.

How it all Began

Flavour eventually left the band, after working with them for eleven years.

After he left Soundcity Communications, he started playing with different bands on his own. Although it was a difficult journey, nevertheless, he kept on learning on the street. With time, he started going to the studio to learn studio recording. It was during this period he met Darkman and Nigga Raw. He then started doing choruses for Nigga Raw.

Flavour thought to himself, that if he could do choruses that would come out so well for someone else, then he might as well do his own song. So he started recording and creating songs from scratch.

His Rise to Fame

Flavour released his 8-track album titled N’abania in 2008. Afterwards, he released ‘Uplifted’ in 2010. Uplifted had hit singles: Nwa Baby, Oyi and Adanma. The album was successful and made waves on various media platforms, thereby creating a platform for Flavour to become one of Africa’s most sort artist.

Flavour has performed on the same stage with Snoop Dogg, Ciara, French Montana, Lauryn Hill, Akon, Rick Ross, and many other international acts. He has performed for several sold-out audiences worldwide and has featured in major newspapers and media outlets around the world.

His third album Blessed was released in October 2012 under 2nite Entertainment label. Flavour has grown to be a force in the music industry locally and internationally. He released his fourth album, Thankful alongside a hit single Power to Win. The song Power to Win was one of the soundtracks used for American Idol Season 14.

Videos Of His Songs

Adamma directed by Godfather Productions in the album Uplifted in 2011

Kwarikwa featuring Fally Ipupa directed by Masterkraft on the album Blessed in 2012.

Baby Oku directed by Selebobo in the album Blessed in 2012.

Shake directed by Godfather Productions in the album Blessed in 2012.

Chinny Baby directed by Masterkraft on the album Blessed in 2012.

Ada Ada directed by Clarence Peters in the album Blessed in 2013.

Ikwokrikwo directed by Masterkraft on the album Blessed in 2014.

Black is Beautiful directed by Clarence Peters in the album Blessed in 2014.

Wake up featuring Wande coal directed by Clarence Peters in the album Thankful in 2014.

Gollibe directed by Clarence Peters in the album Thankful in 2014.

Ololufe featuring Chidinma directed by Godfather Productions in the album Thankful in 2015.

Sexy Rosey featuring P-square directed by Godfather Productions in the album Thankful in 2015.

Champion directed by Godfather Productions in 2016.

Dance directed by Clarence Peters in the album Thankful in 2016.

Flavour is currently one of the brand ambassadors for Globacom, Life Beer, Flat Tummy Tea, and Bullet Energy drink.

The philanthropy of Flavour

Flavour of Africa Campaign and Tour

Flavour launched the ‘Flavour of Africa Campaign and Tour’ in 2016. During the campaign, he performed in several West Africa countries and made large donations to charities in these countries.

Flavour established the Chinedu Okoli Foundation in 2010. The foundation is based in Lagos, Nigeria. It aims to establish a platform for young people to experience the impact of music through education and empowerment.

Through the Chinedu Okoli Foundation, Flavour is fulfilling his passion to reach out to the poor and needy, while making the world a better place.

As a United Nations Peace Ambassador, Flavour has been serving individuals and families living in poverty in Nigeria, Liberia, and other parts of Africa since 2010.

“Music has improved me as a human being and made me more receptive to business. Now I am more open to opportunities and I have more exposure.”

“It is all on you; nobody will do anything for you. It’s tough but you have to accept it. Even if someone does anything for you, they will need to reap on that, so do not give up on yourself. Despite the negativity, start building yourself.”

“For me, I believe it is always important to not only remember your roots but actually take the time out to revisit and implement growth in any way possible…”

“…Music will forever be a strong force destined to bring us all together.”

“Philanthropy is a staple part of my life. I feel it’s important, not only to raise awareness on crucial societal issues that men, women and children face in Africa, but it is also key to be involved in creating the change one wishes to see.”

“I’ve always wanted to do my best, do better in giving back and in strengthening my interaction with unique and remarkable people from across the globe, who despite having faced though experiences, still find a way to go on with life happily.”

Nominated at the Nigeria Entertainment Awards for the Best Indigenous Artist/Group in 2013.

Ghana Music Awards nominated him for the award of the African Artiste of the Year in 2013.

City People Entertainment Awards nominated him as the Musician of the Year (Male) in 2013.

The Headies nominated Blessed as the Album of the Year in 2013.

Nominated for the Best R&B/Pop Album at the Headies in 2013.

Nominated at the Nigeria Entertainment Awards for the Indigenous Artist of the Year in 2014.

Blessed was nominated as the Best Album of the Year at the Nigeria Entertainment Awards in 2014.

Nominated at the African Muzik Magazine Awards for the Best Male West Africa in 2014.

Nominated at the Ghana Music Awards for the Artiste of the Year in 2014.

Awards and Recognitions of Flavour

Nigeria Entertainment Awards honoured him as the Best Indigenous Artist/Group in 2012.

Video of the Year at the Nigeria Music Video Awards (NMVA) in 2013.

Ada Ada won the category for the Best use of costumes at the Nigeria Music Video Awards (NMVA) in 2013.

Best Collabo of the Year at the City People Entertainment Awards in 2013.

Best Traditional Artist at the African Muzik Magazine Awards in 2014.

Ada Ada won the Best Video of the Year at the African Muzik Magazine Awards in 2014.

Ada Ada won the Video of the Year Award at City People Entertainment Awards in 2014.

MTV Africa Music Awards honoured him with the Best Live Act in 2014.

Judging from the fact that Flavour is a successful singer and the brand ambassador of several big brands. It is indisputable that he has a high net worth, although he is a private person, you can see wealth written all over him, from his house, cars and even his outfits. Although we do not have an exact figure, according to wealthresult.com, Flavour has a net worth of $28 million.

There are times when you just have make a decision that will impact your future. Think it through and ensure you make the right decision.

Be willing to step out of your comfort zone to achieve your dreams.

Even though you have a talent, you still need to learn so you can professionally harness your talent.

Always remember your roots, and be a light to those in darkness regardless of your achievements.