Goods worth millions of Naira were destroyed by a late-night fire that occurred at Mount Olive Plaza, Chief Chidozie Nwankwo (Witchtech) is the owner of the plaza by Okwey Street/Moore Street near Onitsha Main Market in Anambra State on Wednesday.

According to an eyewitnesses account, the fire also destroyed shops on the third floor of the three-storey building located at Okwey Street/ Moore Street. 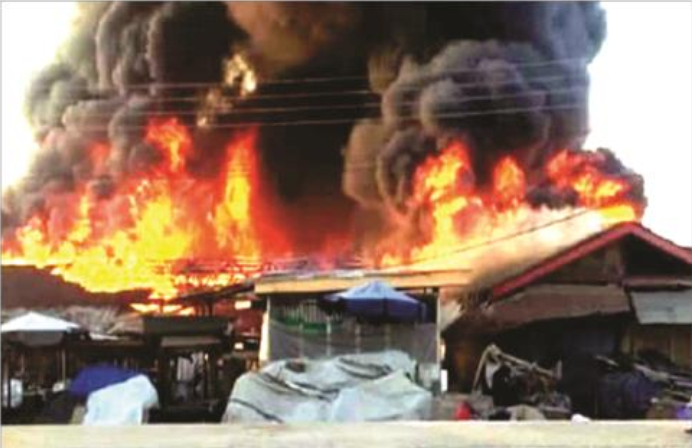 Fides gathered that the fire was caused by an electrical fault. One of the traders in the market said the damage had already been done before the arrival of fire responders.

She said, ‘We were calling the fire service and they have not responded. See how goods belonging to traders are being destroyed before their eyes,’ she lamented.

Confirming the incident, Police spokesperson, DSP Tochukwu Ikenga, said no life was lost in the incident and that preliminary investigation showed that the fire was caused by an electric spark and was put out by the combined efforts of the Police and fire service team.

‘The situation has been brought under control. The Commissioner of Police, Echeng Echeng, advises the public to always take precautionary measures to avert such ugly incidents,’ Ikenga said.

Fides learnt that the owner of Plaza is a governorship candidate of one of the parties in the last governorship election in Anambra State. he could not be reached for his reaction as at press time.