A young disabled man identified as Daniel (A.K.A MALAYSIA) was burnt to death in the early hours of Wednesday August 10th 2022 in Sapele Local Government Area of Delta State.

It was reliably gathered that Daniel who has one bad leg was heavily drunk last night, put on a candlelight before dozing off.

The candlelight however got into his carpet and foam and before spreading to the entire room.

He was said to have struggle to rescue himself, but couldn’t as he was overpowered by the alcohol he consumed before going to bed. 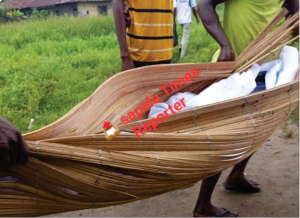 An eyewitness account said, they were able to rescue an old woman from her apartment during the raging inferno while Daniel was stuck as it started from his residence.

As at the time of this report, his remains have been taken by friends to the cemetery for burial.

Contacted, the State Fire Service Headquarters, Asaba, one Isika, who spoke with our correspondent, said the Sapele Fire Station was yet to brief them of any fire incidence.