The first batch led by Miss Chibuogu Perpetua, was taken round the various departments at Fides Media by the Director, Rev Fr Dr Martin Anusi where the different production processes were explained to them.

The group of 16 students of the Mass Communication Department were introduced to the various departmental heads by the Director.

At the News and Editorial Department, the Editor-in-Chief, Mr Jude Atupulazi, enlightened the students on the need to be Knowledgeable as journalists, noting that the world looked up to them to provide information. 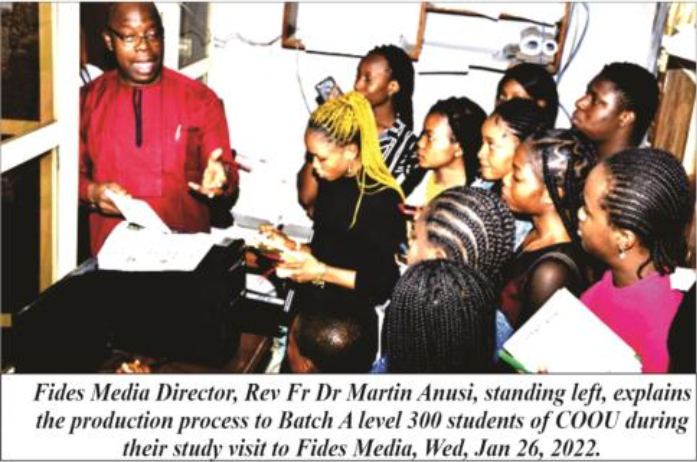 ‘News reporters must know something about everything. They must be smart, confident and not timid. In this department, the material brought in by reporters are scrutinized to ascertain their newsworthiness and edited to remove grammatical errors, as well as ensure they are not seditious,’ he said.

Speaking Further, Mr Atupulazi reiterated the need to be confident as Journalists. He advised that as young Journalists, being bold and courageous helped to boost their confidence and draw respect from those they dealt with.

The students also toured the graphics design/typesetting departments, where they were taken through the gamut of newspaper production.

Moving further, the students were taken to the Production Department where the Production Manager, Mr Alexander Adejoh, explained the use of every machine in the production unit. Speaking further, he said the operators worked tirelessly to ensure that the production process of books, bulletins, as well as the newspapers, were duly followed, noting that it ensured that the job done was excellent and professional.

The students were also taken to the Lithography Department. In this department, the lithograper explained what went on there. Later the visitors were taken to the studio where they were taught the basics of photography and videography, after which they proceeded to take pictures with the Director and other Fides staff members. 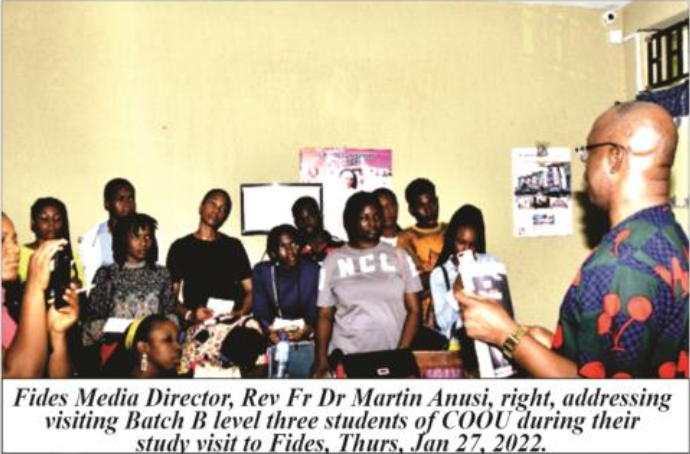 The Director, Rev. Fr. Martin Anusi, appreciated them for coming and also presented Fides souvenirs to the students while encouraging them to always be good students and strive to be the best in whatever they did.

The next day, Fides also played host to another batch of students from same school and department, numbering 36. They were also taken round the facilities at Fides and had the production processes explained to them.

Speaking at the end of the exercise, the team leaders, Miss Perpetua Chibogu Akamelum and Miss Chidimma Ejesieme thanked Fides Media and Fides Media Director for exposing them to the production processes, noting that they they got more than they expected.