It was a narrow escape for Fides reporter, Alexander Johnson Adejoh, Thursday, when some ticket touts at the popular Unizik Junction, Awka, nearly descended on him for taking their picture while they were collecting money from keke drivers in defiance of the order by Gov Chukwuma Soludo, banning them from operating, Alexander Johnson Adejoh reports.

Governor Soludo had during his inauguration, March 17, directed that commercial vehicle operators, including tricycle and motorcycle drivers, should no longer pay cash to touts operating in the name of revenue generation across the state.

Gov Soludo had said that an acceptable system of revenue collection would be put in place to ensure that people were not unduly taxed. The governor’s decision was hinged on the practice in most towns in the state, where touts are known to print illegal tickets which they use to collect money from drivers.

But days after the order, a keke driver was reportedly beaten by the same touts after he refused to pay money to them for a ticket, reminding them that an order from the state government had been given against that.

It was said that the touts, numbering about three, had accosted the Keke driver at the park close to Unizik Junction and demande the normal N200 fee before commencing the daily business.

The driver however told them that he heard the new governor warning people not to pay cash to anybody henceforth, a statement that infuriated the touts. 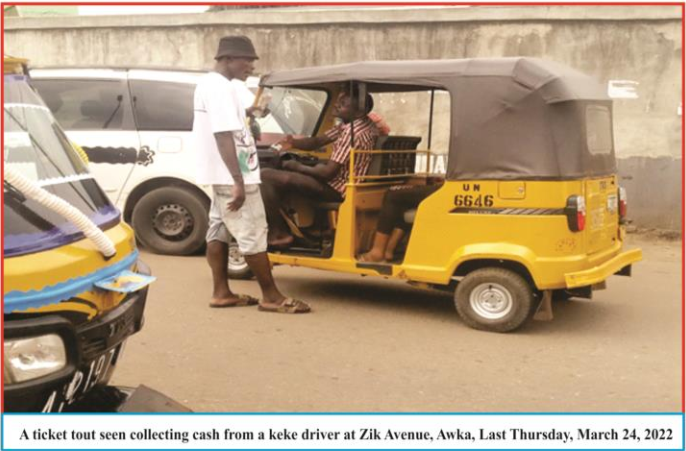 The tricycle operator was said to have told them to go and look for something else to be doing, as touting had expired in Anambra State, unless they were the only people who had not heard that Soludo had banned touting in the state.

But the touts insisted on collecting the money and told him they were not ready for jokes. In fact, one of them also told the Keke operator to call Soludo and tell him that they demanded the money.

They also told him that Soludo had just come and did not know how the system operated.

But on Thursday when Fides reporter, Adejoh, went to monitor compliance to the order, he still discovered that the touts were doing their old business and managed to take pictures of them collecting the money when he was spotted by one of them who harshly demanded what he was doing.

The reporter denied doing anything and as the tout menacingly moved towards him and about alerting his gang, the reporter quickly jumped into a vehicle and escaped from their grip.

Following the Anambra State Government’s order banning the activities of touts, popularly known as Agberos, hiding under the umbrella of revenue collectors, Rev Fr Obinna Dike, Fides Deputy Director I, has called on all stakeholders to work towards the actualization of the governor’s directive.

Fr Dike stressed the urgent need for major stakeholders like the police, bus/keke union, and community leaders, to comply with the order, while urging government to find ways to engage the so-called touts with gainful employment.

Speaking to Fides, meanwhile, some of the keke drivers who commended Prof Soludo for his initiative, urged law enforcing agencies to ensure full compliance to the order.

‘It is a welcome development but most of these touts are not willing to surrender as this seems to be their only source of livelihood. I however encourage the Anambra State Government to employ some of the touts who are willing to learn other crafts,’ Mr Uche Obi, a tricycle operator said.

Another keke driver who pleaded anonymity out of fear, said he would continue to pay the touts any amount of money requested of him, as he would rather not lose his life, adding that most of those touts carried deadly weapons.

However, Echeng Echeng, the Commissioner of Police in Anambra State, has ordered police operatives in the state to strictly enforce the state government’s ban on touting and illegal revenue collection.

The police boss, in a statement on Sunday, March 20, charged officers to ensure full compliance to the order, especially at motor parks.

Fides learnt that the CP also warned those engaged in other unlawful acts to desist forthwith, noting that the police and other security agencies had been deployed around the state to arrest anyone caught flouting the order.