The Fides quintet of Miss Mercy Hill, Mr Alexader Johnson Adejoh, Mr Precious Ukeje, Miss Adejumoke Alebiosu and Miss Elizabeth Bassey Awu, have emerged winners of the Fides Best Reporter of the Month (FiBROM) Award for May, 2021. Each of the reporters received a cash award from the Fides Management.

Announcing their selection at the Fides’ News and Editorial Meeting held at Fidesplex on Monday, June 21, the Editor-in-Chief of Fides Newspaper, Mr Jude Atupulazi, said their story titled: ”Protest Trail Police Blockage of Road in Awka”, and published in the Fides Newspaper of May 23-29, 2021, won them the award.

According to Mr Atupulazi, the fact that the five did not stop at just reporting what the Auxiliary Bishop of Awka Diocese, Most Rev Jonas Benson Okoye, said, but instead gave an in-depth report to the story, won them the award. 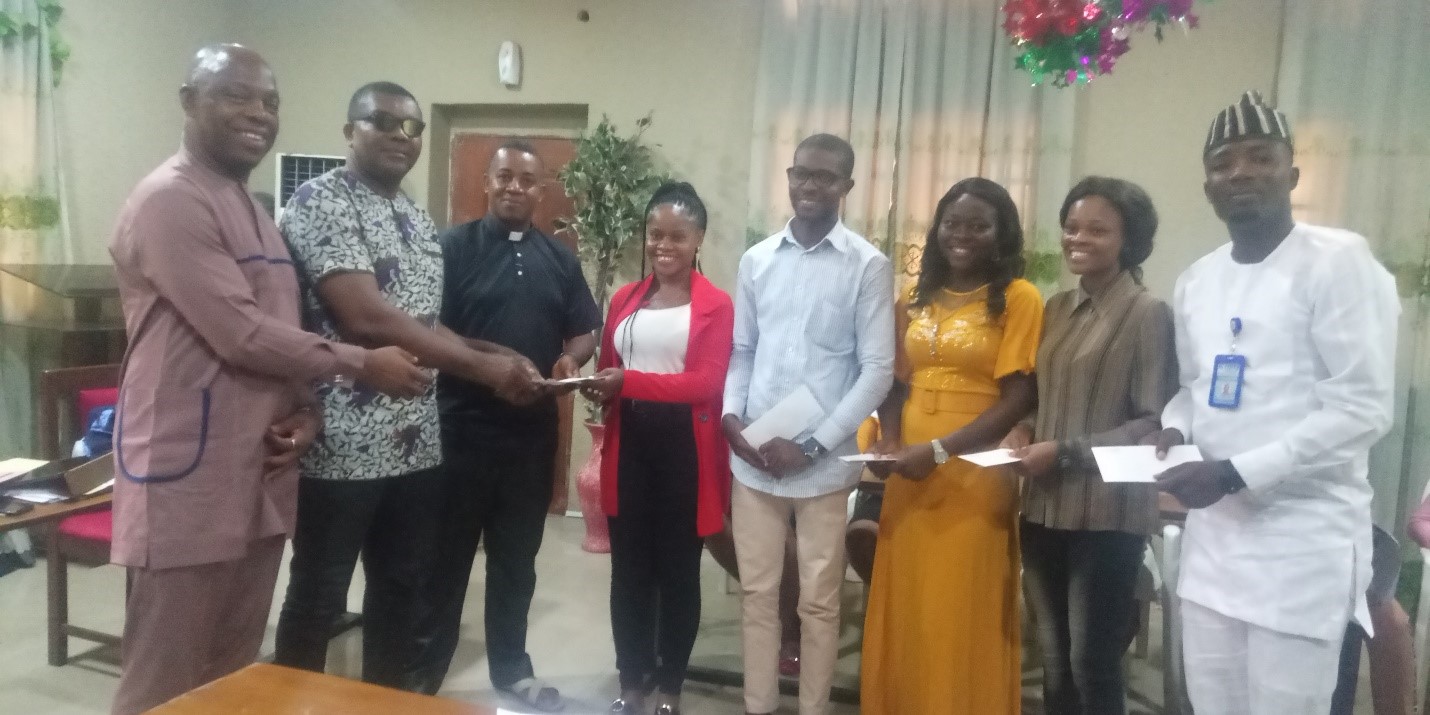 The Editor-in-Chief also commended them on their other news story titled: ”Amid Hardship, Pure Water Price Soars”, which was published in the Fides Newspaper of May 9-15, 2021, noting that the story also met up with the criteria for the award. He described the five as reporters who had appetite for news.

Atupulazi equally lauded Mrs Chioma Ndife Okigbo for her story, ”Anaku, Omor Communal Crisis: The Inside Story”, also published in the Fides Newspaper of May 23-29, 2021, noting that it was also a good investigative story. According to him, Ndife lost out in the award because he (Jude Atupulazi) also contributed to the news.

For his part, the Director, Fides Media Ltd, Rev Fr Martin Anusi, congratulated the five on their award. Rev Fr Anusi hailed the winners for what he described as their great team spirit and the great sacrifice which they put into their jobs, saying that the five reporters had demonstrated great confidence in journalism.

The director, who also commended the Fides Management Team and the entire members of staff, for their sacrifice and contributions, which, he said, kept Fides going, also appreciated the FiBROM winners and Chioma Ndife Okigbo with his personal money.

Adding her voice, the Assistant Editor of Fides Newspaper, Mrs Uche Amunike, extolled the winners, who were also members of Fides Trends in Anambra (FITIA) team, for their commitment to work. She advised them against allowing envy or any ill to cause disunity among them, but to instead utilise their various individual gifts for their continuous growth and keep working without expecting to be praised.

Speaking on behalf of the winners, Mr Adejoh thanked the Fides Editor-in-Chief for considering them worthy of the award; the Management and Rev Fr Anusi, for the cash gifts, which, according to him, came at the right time.

Adejoh, who recalled how he came to Anambra State and got employed in Fides, thanked God for the opportunity to have been integrated into the establishment and the state, and appreciated the Fides members of staff for their support to him and his team members.