By Chioma Ndife and Sophia Ugwuoke

The Commissioner for Information and Public Enlightenment, Sir Paul Nwosu, has described Fides as a key partner in the actualization of the Anambra project of a livable and prosperous state as conceived by Governor Chukwuma Soludo’s Administration.

Nwosu made the disclosure in his office last Tuesday during a courtesy visit of the new Fides Management led by Rev. Fr. Robert Anagboso. Fides visit was in line with its efforts and commitment in strengthening relationships between Fides and strategic stakeholders, as well as organizations relevant to its developmental growth.

Narrating how he took up the appointment as the Commissioner for Information in the SoludoAdministration, Nwosu said the ministry had established a good working relationship with Fides and assured the FidesTeam of a strong and mutual partnership.

He explained that he had an effective understanding of Fides contribution in providing factual and detailed information for Anambra populace and noted that he was a great lover of Fides Newspaper and read it every Sunday.

The Information Commissioner who had been into journalism, advertising, public relations and marketing for the past 35 years, described himself as a natural friend of Fides owing to its commitment in making society better, saying that it was the reason why he involved Fides during the governor’s second phone-in in interview at ABS. 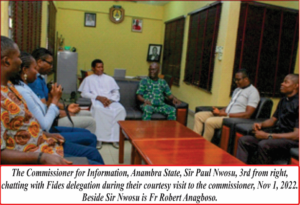 He said that Governor Soludo’s Administration was open to criticism and urged Fides to critic their programmes and activities in a constructive manner.

He emphasized the importance of developmental Journalism, Describing it as key to societal development.

Stating the purpose of their visit, the Fides Editor-in-Chief, Mr Jude Atupulazi, said that following the recent change in management at Fides, they thought it fit to meet and rub minds with important stakeholders in order to strengthen the already existing relationship with the government and create new ones where needed.

In his speech, the Director of Fides, Fr Anagboso, introduced Fides services to the commissioner and asked that the relationship between the government and the media be strengthened; even as he intimated the commissioner about plans for the Fides Man of the Year Award.

Fr Anagboso thanked Sir Nwosu for the warm reception given to the Fides delegation, and assured him of Fides continuous commitment to the growth in government.

He disclosed the various awards which Fides had bagged through its factual reportage and disclosed readiness to partner with the ministry in informing the populace aright.