Pupils of Angel Gabriel Nursery and Primary School, Okpuno, last Tuesday visited Fides Media on an excursion where they were received by the Director of Fides, Rev Fr Dr Martin Anusi.

The visibly excited 41 pupils that represented primaries 5 and 6, were taken round the facilities at Fides where many things were explained to them, while their questions were also entertained.

Welcoming them to Fides, the Director expressed joy at seeing the pupils and teachers, even as he appreciated the idea of the school on engaging the pupils on the practical aspects of learning. 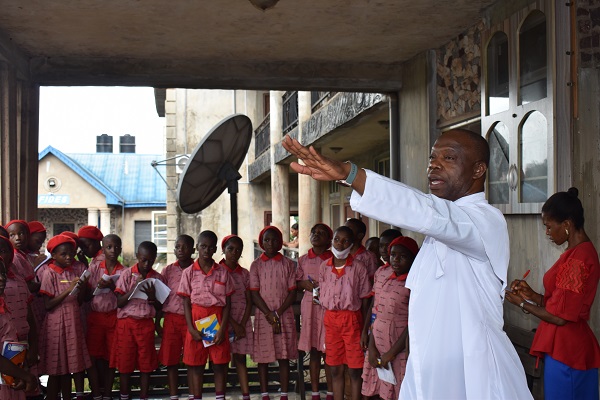 Fr Anusi explained to the pupils and teachers what Fides Media represented to the Catholic Diocese of Awka and described Fides as the communication directorate of the diocese which engaged itself in publications of Fides Newspaper, bulletins, journals, and all forms of printing publications.

‘Here in Fides, we are the communication arm of the Catholic Diocese of Awka. Here, Fides Newspaper and bulletins are published. Fides produces many things because we are a publishing and printing house.  We have two big farms for banana and plantain and also the fish pond with vegetable farm,’ Fr Anusi explained.

The pupils were then taken round to such areas as the reception, where the Director educated them on some of the portraits and photo galleries hanging on the wall

They were also taken to the newsroom where Mr Atupulazi warmly welcomed the pupils and their teachers. Atupulazi who described the pupils as smart and intelligent, urged them to be of conduct and remain focused in order to learn all that was needed of them in the tour.

They also visited the press and the Production Manager’s office; as well as the operators’ unit and the finishing department.

The pupils equally visited the Fides Farm where the Manager, Rev. Fr Pio-Anthony Okafor, showed the pupils the various farm segments. From the plantation, he took them to the vegetable, snail and fish farms.

For their part, the teachers of the school thanked the Director, staff and Management of Fides Media for the warm welcome they received and for exposing the pupils to the various aspects of newspaper production.

They marveled at the quality of work and show of dedication the media organization exhibited, while the pupils who were thrilled with the photographs they took at the photo studio, also expressed happiness at what they saw.