Abdulkalid Auta, a crippled traffic hero at Aroma Junction, has described Fides Newspaper as the Hope of the Hopeless after reading his story in the newspaper, report Alexander Johnson Adejoh and Adejumoke Alebiosu.

Auta who spoke to Fides at Aroma Junction, Awka, March 15, said over the years, he had known media organizations to concentrate attention on the big shots in society, especially politicians. He commended Fides Newspaper on what he termed its unwavering commitment to addressing the plight of the voiceless in society. 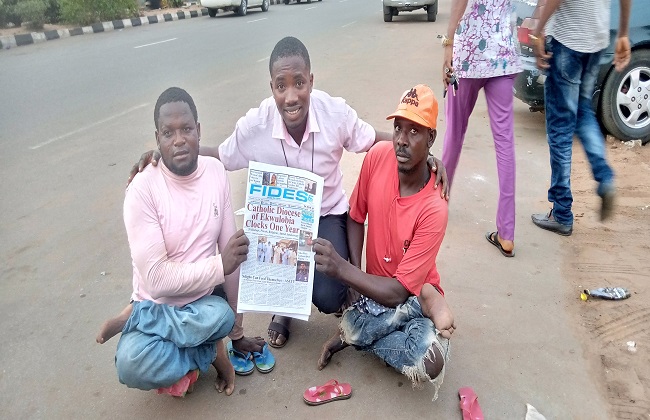 His words, ‘I recall when we had our last disabled beggars meeting, one of us, Sani, a final year student of UNIZIK who is stationed at Roban Stores, Awka, disclosed how some journalists from Fides Newspaper interviewed him, with the story giving him an edge among other students.’

Auta, who noted that one Emeka, a motorist-friend of his, stopped by earlier at Aroma to congratulate him on the story, said Emeka tagged him a celebrity beggar whose story was flashed on the front page of Fides newspaper.

According to him, ‘It was also on record that for more than one year that I have been carrying out the responsibility of controlling traffic at Aroma Junction, no media house in Anambra State saw me worthy to be interviewed until Fides Newspaper changed the narrative.’

Similarly, Yahaya Adamu, Auta’s friend who also aided the smooth control of traffic at Aroma when officers of the Anambra Road Traffic Management Agency, ARTMA, were off the road, said Fides Media were apostles of hope without segregation,

‘The fact that we are neither from Anambra State, nor Christians, proved to me that Fides Newspaper is unlike other media organizations who for more than 12 months of committed service did not have any reason to celebrate the helpless,’ Adamu disclosed.

Responding, Rev Fr Dr Martin Añusi, Director, Fides Media, publishers of Fides Newspaper, who expressed his delight over the development, said Fides Newspaper was a grassroots paper aimed at advocating for the voiceless.

‘I feel happy about that because this enters into our mission. If you can remember, Fides won an award, precisely on proximity value and balanced news, and this is what they call proximity. This is who we are; building up humanity,’ Fr Anusi stated.

He said that for Fides, news and communication was not just about information, but about building a better humanity.

‘What he does is for humanity and I think this is what brings him close to Fides because he mirrors what we stand for. I am happy about that because this is who we are,’ Fr Anusi reiterated.

He advised journalists to go for stories that contributed to humanity and not focus on only stories about those he termed big shots.